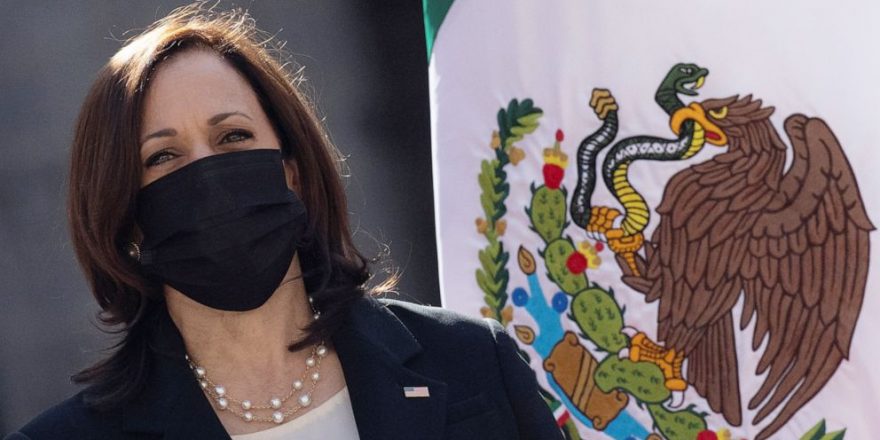 Vice President Kamala Harris is having her first face-to-face meeting with Mexican President Andres Manuel Lopez Obrador on Tuesday on her first foreign trip in office — but a visit focused on addressing the root causes of migration risks being overshadowed by criticism against the vice president, both from Republicans and members of her own party.

Harris, currently on the second half of a two-day visit to Guatemala and Mexico, has been facing backlash from conservatives for not visiting the southern border since President Joe Biden tasked her with an immigration role in March, when a record-breaking number of unaccompanied minors were crossing the southern border. Now, she is hearing new criticism from progressives for using her international spotlight in Guatemala on Monday to tell immigrants, “Do not come.”

The “do not come” message from Harris was first issued by Biden and his top officials who believe it’s critical to communicate the limits of the current system.

Presented with some of that criticism in an interview that aired Tuesday on NBC, Harris remained cagey on why she had not yet made a trip to the southern border and falsely suggested to that she has already been — though she has not since being tasked as vice president to address the migrant surge.

When NBC’s Lester Holt called out the inaccuracy, Harris acted as if she didn’t understand his point.

“I– and I haven’t been to Europe. And I mean, I don’t– I don’t understand the point that you’re making. I’m not discounting the importance of the border,” she said.

Her trip to meet with Guatemalan and Mexican leaders is part of a two-track approach to the issue, senior administration officials have said, of “stemming the flow” of migration in the near term and establishing a “strategic partnership” with Mexico and Northern Triangle countries “to enhance prosperity, combat corruption and strengthen the rule of law” in the longer term.

Pressed in the interview about why people should heed her warning not to come to the U.S. when many see images of people getting into the country, she pivoted to the focus of her trip: addressing the root causes of migration.

“There is not gonna be a quick fix. We are not gonna see an immediate return,” she said.

White House press secretary Jen Psaki defended Harris against criticism at Tuesday’s press briefing, saying the vice president may go to the border “at some point” and reiterated her assignment for this visit.

“I would say we’re not taking advice from former President Trump or most of the Republicans who are criticizing us on this, given they were all sitting there while we created this problem we walked into,” Psaki said.

At a bilateral meeting one day earlier with President Alejandro Giammattei of Guatemala, Harris reiterated a point Biden has been making since taking office.

“This is disappointing to see,” Ocasio-Cortez tweeted. “First, seeking asylum at any US border is a 100% legal method of arrival. Second, the US spent decades contributing to regime change and destabilization in Latin America. We can’t help set someone’s house on fire and then blame them for fleeing.”

Under the 1951 United Nations Convention Relating to the Status of Refugees and the 1967 protocol, and adopted into U.S. law, the U.S. must recognize refugees that fear persecution and are not able to get help from their home country. Asylum seekers are typically given administrative court dates and released while some are detained on a case-by-case basis ahead of their asylum hearings.

Speaking with reporters on the tarmac in Guatemala City Monday evening, Harris didn’t respond to AOC’s criticism when presented with it directly but pivoted to the focus of her trip.

“I’m really clear: We have to deal with the root causes and that is my hope. Period,” she said.

“I am here because the root causes are my highest priority in terms of addressing the issue and we need to we need to deal with it,” she added.

Also presented with Ocasio-Cortez’s criticism on Tuesday, Psaki repeated that immigration reform is one of the administration’s top priorities.

“What the vice president was simply conveying is that there’s more work to be done,” she said. “As we’ve said many times from here and from many forums before, we need more time to get the work done to ensure that asylum processing is where it should be.”

But it’s not only staunch conservatives like Sen. Lindsey Graham, R-S.C., and progressives like Ocasio-Cortez who have expressed disapproval with the Biden administration’s handling of immigration — albeit, for different reasons.

Democrat Rep. Henry Cuellar of Texas, who represents a border district and describes himself as a “moderate-centrist,” has also encouraged Biden and Harris to visit the southern border.

“I think it’s important, but I guess he’ll do it on their own time and terms,” he said in an interview with Fox News last week.

Harris arrived in Central America on Sunday and returns to the U.S. Tuesday evening.

Immigration authorities arrested or detained more than 172,000 migrants at the southwest border in April, according to administration officials, the largest in a month since the early 2000s.

The vice president’s trip also comes as a report from the Biden administration family reunification task force out Tuesday identifies 3,913 children who were separated from their families between July 2017 and Jan. 2021 under former President Donald Trump’s “zero tolerance” policy.

Biden has told migrants not to come to the U.S. on several occasions since taking office.

“I can say quite clearly don’t come over,” Biden told ABC News Anchor George Stephanopolous in an interview in March. “Don’t leave your town or city or community. We’re gonna make sure we have facilities in those cities and towns run by department of — by DHS and also access with HHS, the Health and Human Services, to say you can apply for asylum from where you are right now.”

Staff for Harris on the ground in Guatemala told ABC News they are hopeful the first “migrant center” would open in Guatemala in “the next few months.”

The policy forced asylum seekers transiting through Mexico to return to dangerous border towns rife with violent crime while their claims were decided in American courts.