Home » GOP senators are set to tank the bipartisan proposal for a Jan. 6 commission, much of which is identical to the law creating the Sept. 11 commission bill. Here's how they compare.

GOP senators are set to tank the bipartisan proposal for a Jan. 6 commission, much of which is identical to the law creating the Sept. 11 commission bill. Here's how they compare.

As the Senate prepares to vote on legislation that would establish a commission to investigate the insurrection at the Capitol on January 6, 2021, a lack of GOP support is likely to kill the bill.

On May 19, the bill made it through the House of Representatives with a 252 to 175 vote; 35 Republicans joined Democrats to pass the bill and send it to the Senate.

Rep. John Katko, who is the House Homeland Security Committee’s top Republican, struck a deal with Rep. Bennie Thompson, a Democrat, on the legislation around the commission. House Minority Leader Kevin McCarthy, however, did not endorse the bipartisan effort.

In the Senate, at least 10 Republicans would need to defect from the party leadership stance to help move forward the legislation. In total, 60 votes are needed for the January 6 commission bill in the Senate to bypass a likely filibuster.

One of the complaints issued by GOP senators is that the legislation wouldn’t be bipartisan — like the previously established September 11 Commission.

Senate Minority leader Mitch McConnell said earlier this week that he would oppose what he called the “slanted and unbalanced” creation of the bipartisan commission and asked other Republicans to vote against it as a personal favor.

“It’s not at all clear what new facts or additional investigation yet another commission could lay on top of the existing efforts by law enforcement and Congress,” McConnell said.

Sen. Chuck Grassley, rejected the January 6 commission legislation because he wanted it to look more like the legislation passed into law that set up the commission that investigated the terror attacks of September 11.

The draft legislation for January 6 largely resembles the bill for the creation of the September 11 Commission.

On the House floor, Rep. Katko said, “this legislation is modeled directly on the legislation that created the 9/11 Commission.”

“I encourage all members, Republicans and Democrats alike, to put down their swords for once, just for once, and support this bill,” he added.

In some sections, the bills are nearly identical in their functions, intentions, and even language.

The 10 commission members would be chosen equally between Democrats and Republicans, and the text for both commissions says that the bodies would be responsible for advising “corrective measures” aimed at preventing “terrorism” in the future. 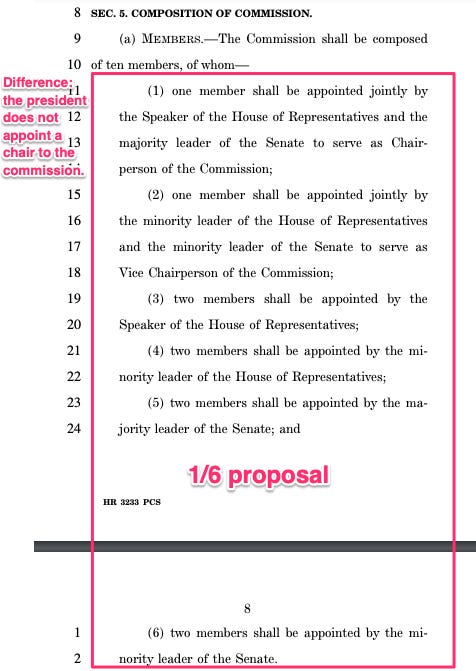 The only difference in membership is that for the September 11 Commission, former President George W. Bush was able to select the commission’s chair, while Democratic leadership in Congress picked the vice-chair. In the January 6 commission legislation, Speaker of the House Nancy Pelosi and Senate Majority leader Chuck Schumer would share the responsibility of selecting a chair. The vice-chair is chosen by the Senate minority leader and House minority leader. 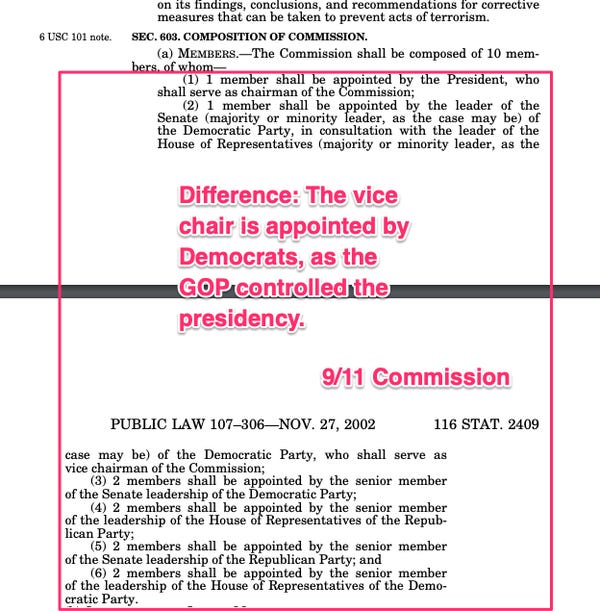 The language in both bills in terms of how the commission is staffed is identical, saying, “the Chairperson, in consultation with the Vice-Chairperson, in accordance with rules agreed upon by the Commission, may appoint and fix the compensation of a Staff Director and such other personnel as may be necessary to enable the Commission to carry out its purposes and functions.”

Both bills stipulate that the appointees to the commission be nongovernmental, however, in the January 6 legislation, appointees must have at least two areas of specialty — whereas the September 11 Commission does not specify how many areas of expertise members must have. They both single out intelligence gathering, governmental service, and law enforcement as areas of expertise, while the September 11 Commission asked for specialties specific to that tragedy, such as aviation and foreign affairs.

The ability to produce subpoenas in the January 6 commission closely tracks the structure of the September 11 Commission as well, and a majority of commissioners (which would mean a bipartisan vote), or agreement between the chair and vice-chair is required to approve them.

Due to the bipartisan structure of the January 6 draft bill, Republican commission members could vote in a block to stop subpoenas, or alternatively, a high ranking Republican could overrule the other commissioners with an agreement with the chair.

Part of McCarthy’s opposition to that language could be because he could face a subpoena from the commission, as he spoke to Trump on the day of the insurrection, pleading with him to call off the rioters. 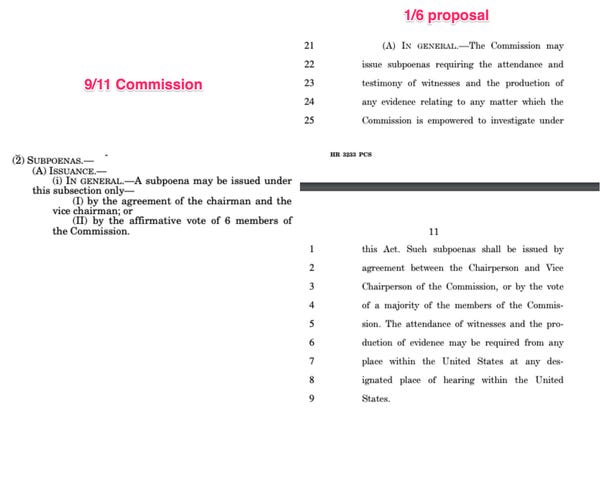 “I wouldn’t be surprised if he were subpoenaed. I think that he very clearly … said publicly that he’s got information about the president’s state of mind that day,” Rep. Liz Cheney told ABC News.

Much of the linguistic differences revolve around describing the acts of January 6 as domestic terrorism, as opposed to an act of terrorism carried out by foreign agents, as was the case with the September 11 Commission.

The commission’s stated purpose is in part:

(1) To investigate and report upon the facts and causes relating to the January 6, 2021, domestic terrorist attack upon the United States Capitol Complex (hereafter referred to as the “domestic terrorist attack on the Capitol”) and relating to the interference with the peaceful transfer of power, including facts and causes relating to the preparedness and response of the United States Capitol Police and other Federal, State, and local law enforcement in the National Capitol Region and other instrumentality of government, as well as the influencing factors that fomented such attack on American representative democracy while engaged in a constitutional process.

The breach of the Capitol on January 6 interrupted the certification of the 2020 presidential election results by Congress. The lives of members of the US House of Representatives and the US Senate and their families and staff, along with the then Vice President of the United States Mike Pence and his family were put in danger. Five people died during the siege (including a US Capitol Police officer, whose mother lobbied GOP senators to vote for the commission).

The GOP response to the legislation

This is where things get tricky, as the make-up of the current GOP is fractured.

Former President Donald Trump told GOP members to squash it. Many are still in the grip of Trump, whose supporters largely made up the mob, and were told by Trump during a “Stop the Steal” rally that preceded the insurrection to march to the Capitol.

Those in leadership have hinted that the commission would be a political inconvenience ahead of the 2022 midterms and 2024 presidential election.

“A lot of our members … want to be moving forward,” said Sen. John Thune, the second most important Senate Republican. “Anything that gets us rehashing the 2020 election, I think, is a day lost on being able to draw contrast between us and the Democrats’ very radical left-wing agenda.”

And there’s a minority of those who want to investigate the breach of the US Capitol by an armed mob — even if it may expose some in the Republican Party.

Sen. Mitt Romney has called out his party for the broad opposition members have taken to a January 6 commission.

“Republicans would be seen as not wanting to let the truth come out,” said Romney. “I don’t believe that’s what’s the motivation but I think that’s the perception.”