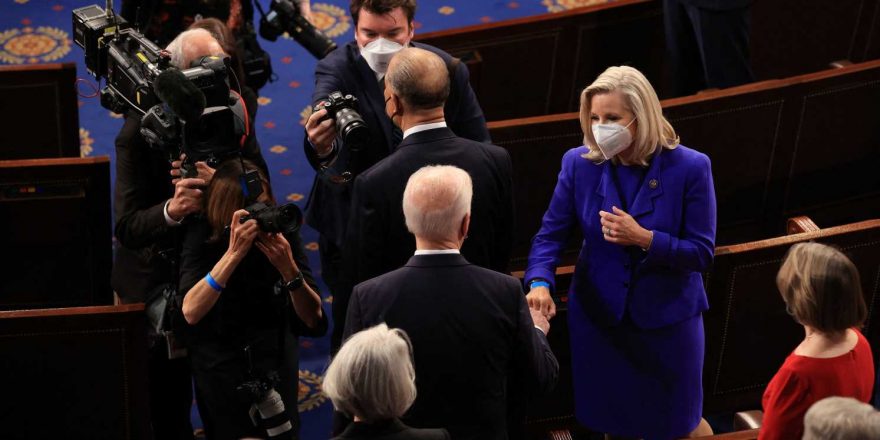 WASHINGTON — Rep. Liz Cheney, R-Wyo., who has come under attack by some GOP colleagues over her support for impeaching Donald Trump, came under fire again this week for her friendly greeting of President Joe Biden at his address to Congress.

“I disagree strongly w/ @JoeBiden policies, but when the President reaches out to greet me in the chamber of the US House of Representatives, I will always respond in a civil, respectful & dignified way,” Cheney tweeted Thursday evening.

The two exchanged a fist bump in the House chamber on Wednesday evening, where he gave his first address to a joint session of Congress.

Moments you might have missed during Biden’s address: A Biden-Cheney fistbump, a sleepy Ted Cruz and John Roberts clapping

Cheney said again this week that the Republican Party needs to move on from its association with Trump. She was a critic of his presidency and has become a target of the former president and his supporters. Trump has labeled her a “warmonger” and encouraged Republicans to vote her out of office.

The Wyoming Republican has been critical of Biden as well, and before his address to Congress sent tweets accusing him of “failing the American people” and pursuing “dangerous and divisive policies to appease the far-left.”

But the fist bump she shared with Biden caught the attention of her critics, such as Donald Trump Jr., whose tweet slamming Cheney for the greeting was widely shared among the Trump circle of Republican supporters.

Cheney was also greeted at the address by Senate Minority Leader Mitch McConnell, who has publicly defended her amid attacks from the far right.

Inside the GOP: Amid fights over Donald Trump, Republicans unite to bash Joe Biden and his 100-day speech