A firefighter’s marked car was burglarized by looters who decided to take advantage of the wildfires devastating California, officials revealed Sunday.

The unidentified firefighter’s wallet was stolen and his bank account drained while he directed firefighting crews in Santa Cruz County, Battalion Chief Mark Brunton of the California Department of Forestry and Fire Protection told reporters Sunday.

Santa Cruz County Sheriff Jim Hart said looters were breaking into empty houses after residents evacuated from the area near the CZU Lightning Complex wildfire, which burned 74,000 acres by Sunday night and killed one person. It was only 8% contained.

Hart’s officers have already arrested eight suspected looters for allegedly stealing various personal possessions, including guns and an outdoor heating system. He vowed to pull over anyone who doesn’t belong in the communities and arrest them.

“I have no empathy, I have no patience for somebody who is going to come into our community and steal from people who have been who have been evacuated and victimized and traumatized,” Hart said at a press conference.

As for the victimized firefighter, Hart said he’s confident they’ll find the thief.

“We’re going to hand that case over to the [district attorney] and the DA is going to hammer this guy,” Hart said. 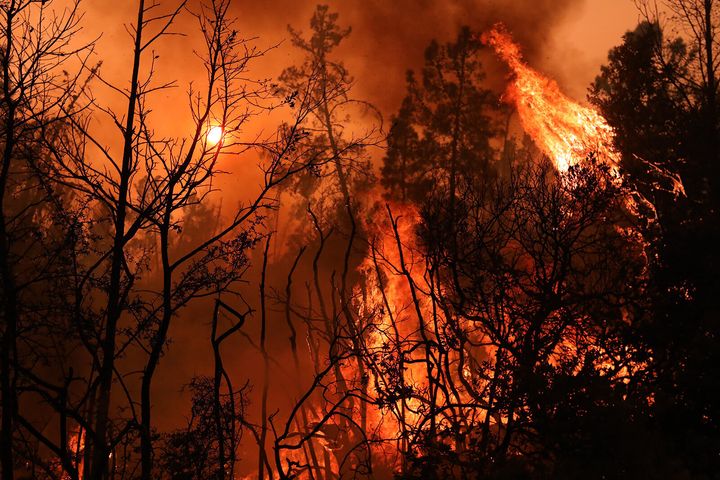 More than 500 wildfires were ignited across California over the past week, triggered by a record-shattering heat wave and some 12,000 lightning strikes. Tens of thousands of people were under evacuation orders and close to 1 million acres have burned.

The LNU Lightning Complex Fire, the second-largest wildfire in California history, burned 348,000 acres in counties north of San Francisco, including Napa and Sonoma, as of Sunday night. It was 21% contained.

The SCU Lightning Complex wildfire, the third-largest fire in the state’s history, burned more than 344,000 acres by Sunday in San Francisco’s East Bay and farther south. It was just 10% contained.