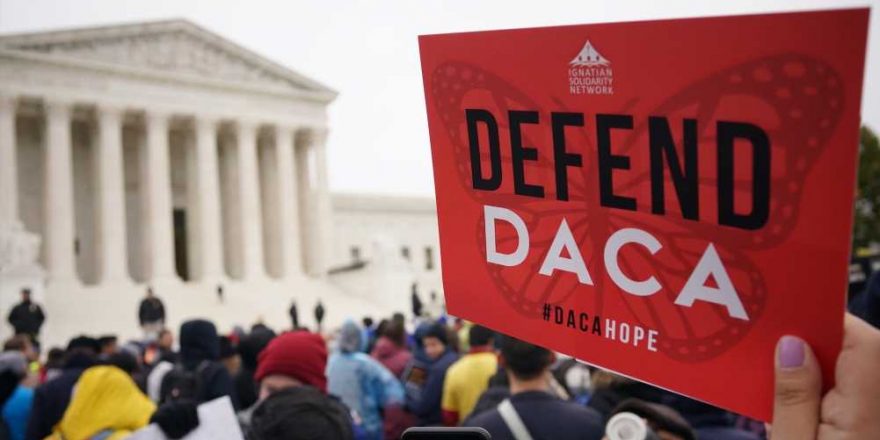 A federal judge in Texas has suspended an immigration program that has protected from deportation thousands of undocumented young adult immigrants who came to the U.S. as children.

Created by former president Barack Obama with a 2012 executive order, the Deferred Action for Childhood Arrivals protects these immigrants, known as “Dreamers,” from being sent to their country of origin after they have spent years living in the U.S. as long as they entered the country before age 16 or applied for the program before age 30.

The Friday decision by federal Judge Andrew Hanen halts new applications from being approved but does not stop applications already sent in from being processed. The government can still collect new applications as long as it doesn’t process them. Currently, the administration is working its way through a giant backlog of application paperwork, and the White House recently assigned additional staff to help adjudicate requests. Government data shared with CBS News shows U.S. Citizenship and Immigration Services has a backlog of more than 80,000 DACA applications since the program was restored by court order in December 2020 after former president Donald Trump tried to end it. But the Supreme Court rejected Trump’s attempt. There are now approximately 650,000 DACA recipients.

But DACA is again under threat because of a 2018 lawsuit brought by Texas and other states requesting a federal judge suspend or shut down the program because it placed an undue burden on states. Hanen, an appointee of George W. Bush, ruled Friday that the Department of Homeland Security did not have a right to create the program because Congress hadn’t granted it the power to do so.

“Congress has not granted the Executive Branch free rein to grant lawful presence outside the ambit of the statutory scheme,” Hanen wrote.

Hanen’s ruling still protects current DACA recipients and allows them to renew their status, as required, every two years. The government should not take “any immigration, deportation or criminal action against any DACA recipient,” Hanen wrote. Hanen also said that the fate of the program will be decided in later court decisions.

Immigration advocates were disappointed by the ruling. Nathalie Rayes, president and CEO of the Latino Victory Project, issued a statement calling it “misguided” and a “huge blow to the progress made to fix our broken immigration system.”

“DACA is an invaluable program that has helped thousands of Dreamers live full lives in communities across the country,” Rayes said. “Dreamers are our neighbors, military servicemen and women, frontline workers, and taxpayers who know no other country as their own but the United States. We urge members of Congress to heed today’s ruling as an urgent call to pass legislation that will once and for all provide a permanent solution and solidify Dreamers’ status in this country.”

The ACLU also urged Congress to act. Omar Jadwat, director of the ACLU’s Immigrants’ Rights Project, said that “Dreamers’ futures shouldn’t be in the hands of the courts.” He added, “It is absolutely urgent that Congress acts now through the budget reconciliation process to provide Dreamers and other undocumented members of our communities with reliable status and a pathway to citizenship.”

President Biden said securing the DACA program would be a priority in a memo issued on his first day in office, and the administration is expected to appeal Hanen’s decision. In February, Democrats in Congress unveiled a comprehensive immigration bill with a path to citizenship for undocumented immigrants, including a fast-tracked citizenship process for Dreamers, but negotiations have stalled. Now Democrats are considering using the budget reconciliation process to pass immigration reform, which would bypass the need to get a filibuster-proof majority requiring Republican buy-in.

With such a narrow majority in the Senate, the Democrats’ success hinges on the support of moderates in the party like Sen. Joe Manchin. Notably, on Thursday, Bloomberg Senate reporter Steven Dennis reported that Manchin supports passing immigration reform through the budget reconciliation process. But Manchin said he supports a measure that passed the Senate in 2013, not the recent immigration bill Democrats have been negotiating.

“I’m a 2013 immigration supporter,” Manchin said. “If we had that bill then we wouldn’t have the problems we have today.” Still, Manchin told Dennis he is not yet certain he supports everything currently in the $3.5 billion reconciliation bill that is focused on major infrastructure spending. Manchin and fellow moderate Democrat Sen. Jon Tester say they are waiting for more details to be available before making a decision.