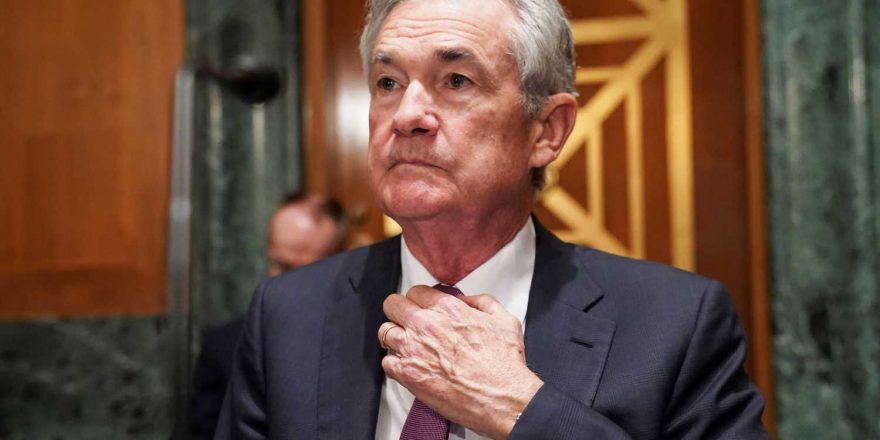 Fed Chair Powell grilled by grouchy senators over inflation and climate change, even as economy rebounds

During testimony before the Senate Banking Committee, Democrats grilled Powell over the central bank's support for climate change initiatives and its rollback of financial protections, while Republicans questioned the Trump nominee on his commitment to controlling inflation.

"Big banks rake in cash – and they spend it on executive compensation and dividends and buybacks, instead of lending in communities or increasing capital to reduce risk," said committee chairman Sen. Sherrod Brown, D-Ohio. "The Fed should be fighting this trend, protecting our progress from Wall Street greed and recklessness – not making it worse."

Ranking Member Sen. Pat Toomey, R-Pa., offered criticism for what he views as the Fed's inaction on inflation.

"The Fed's policy is especially troubling because the warning siren for problematic inflation is getting louder. Inflation is here, and it's more severe than most — including the Fed itself — expected," he said. "Since the Fed has proven unable to forecast the level of inflation, why should we be confident that the Fed can forecast the duration of inflation?"

The barbs from both sides of the aisle may feel unfamiliar to Powell, who has otherwise received praise from lawmakers for acting quickly to flush the U.S. economy with cash as the Covid-19 pandemic forced thousands of businesses to close.

The recent criticism of the Fed and its leader may have less to do with economics and more to do with political posturing. With members of both parties seeking an early edge in the key 2022 midterm elections, Powell may find himself with fewer public allies in Congress.

"You have earned and deserved another term as chair of the Federal Reserve," he told Powell. "You have proven to be a steady hand throughout this pandemic or ongoing recovery."

Progressive Democrats may hope to open an avenue for President Joe Biden to nominate a Democrat to lead the central bank.

Brown and other members of his caucus have pushed Powell to compel lenders to address climate change, reduce income inequality between executives and their employees and bulk up capital requirements for the nation's largest banks.

Some, such as Massachusetts progressive Democrat Sen. Elizabeth Warren, argue that the Fed should be led by a chair who proactively seeks to strengthen Wall Street oversight. Those hoping for a Democratic Fed chair have said that Fed Governor Lael Brainard is an excellent option for Biden.

"What I'm looking for is that the Fed's record over the past four years is one move after another to weaken regulation over Wall Street banks," Warren told Powell on Thursday.

"There's no doubt that the banks are stronger today than they were when they crashed the economy in 2008," she added. "But that's the wrong standard: The question is whether or not they are strong enough to withstand the next crisis and whether the Fed is tough enough to protect the American economy and the American taxpayer."

A congressional staffer on one of the relevant committees told CNBC that such criticism should be taken in context, and that the Fed often becomes an easy punching bag for politicians hoping to win reelection with promises of economic reform.

Still, the staffer said that Powell's handling of the coronavirus crisis has proven his worth and offers President Joe Biden a compelling case to keep him around for a second term.

The Fed is "an easy target for when things aren't going perfectly or when the economy isn't booming. It's really easy to turn to the Fed and say, 'What are you doing to fix this?'" the staffer said.

The staffer added that lawmakers are grateful for the Fed's leadership throughout the pandemic and that Powell remains well liked by members of both parties on Capitol Hill.

Powell spent much of his time before the House and Senate answering questions about the central bank's inflation outlook and its plans for its easy monetary policies.

He began his semiannual testimony on Wednesday by saying the Fed is still a ways off from adjusting its monthly billion-dollar purchases of Treasury bonds and mortgage-backed securities, and currently has no plans to edit interest rates.

He seemed to balance that somewhat on Thursday, when he acknowledged to the Senate that "inflation is well above target."

Ultimately, the pace of inflation and employment gains will determine when Powell and his colleagues shift the Fed's monetary stance. Markets tend to gyrate when the Fed telegraphs intentions to tighten monetary policy, so the timing of any potential tapering or interest-rate hikes could play a decisive role come November 2022.

"We've said that we would begin to reduce our asset purchases when we feel that the economy has achieved substantial further progress measured from last December," Powell said Thursday. "We're in active consideration of that now."