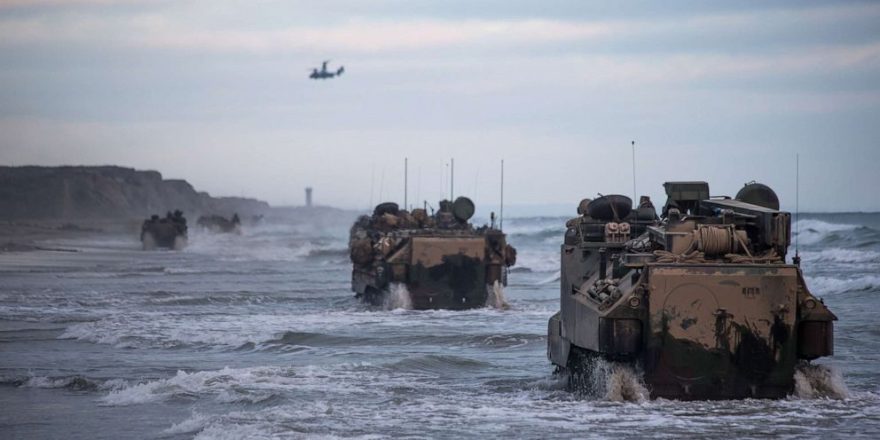 Ahead of a fatal training accident, Marine Pfc. Jack Ryan Ostrovsky shared his reservations about the safety of assault amphibious vehicles, or AAVs, according to his father, Peter Ostrovsky.

“A week before the AAV incident, Jack Ryan told me about his concerns with the AAVs, and that they sink all the time. It was hard for me to believe that statement, but now I know there was more to the story that was the basis for his concern,” Ostrovsky told lawmakers on Capitol Hill Monday.

Ostrovsky was one of eight Marines and one sailor who perished at sea last summer when their AAV took on water and sank off the coast of Southern California. A command investigation has since identified it as a preventable tragedy.

“First and foremost, the sinking of this AAV and the deaths of eight Marines and one sailor were preventable, preventable in so many ways,” Assistant Commandant Gen. Gary L. Thomas told the House Armed Services Committee in his opening remarks. “But we failed. We failed these brave young men.”

The military investigation concluded that rough waters and a long string of human and mechanical failures ranging from insufficient water escape training to poorly maintained vehicles led to the accident.

Peter Vienna, stepfather of Navy Corpsman Christopher “Bobby” Gnem, one of the deceased, took umbrage with the tragedy being called a “mishap” during his testimony.

“An AAV crew that did not follow its own emergency SOPs — had they done so the AAV still would have sunk, but not with our boys in it,” Vienna said. “I point that back at leadership’s failed duty to properly train and certify that group, just another result of a terrible lack of readiness.”

Several congressmen with experience in AAVs from their own time in the Marines expressed similar concerns during Monday’s hearing.

“I spent a lot of time in an AAV, including in waterborne operations — that’s how we got into Baghdad in 2003,” said Rep. Seth Moulton, D-Mass., a former infantry officer. “I can tell you we sat on the roof because we were afraid it would sink.”

Ruben Gallego, D-Ariz., was an enlisted infantryman in the Marines.

“I actually spent seven months living on AAVs,” he said during the hearing. “In the great scheme of things somehow the Marine Corps thought the best way to transport men around Iraq was to shove us into a AAVs. They were death traps.”

First Marine Expeditionary Force Commander, Lt. Gen. Joseph Osterman told reporters last August that only two AAVs have sunk in the last 25 years. But the investigation revealed more than half of the vehicles inspected across the fleet were not fully watertight and another half had emergency escape lighting failures — both being problems that contributed to last year’s disaster.

On the morning of July 30, 2020, 13 AAVs assigned to Camp Pendleton’s 15th Marine Expeditionary Unit made a roughly one mile ship-to-shore movement from the USS Somerset to train on San Clemente Island, a Navy-owned piece of land about 60 miles off the Southern California coast. The trouble began in the early evening, when most vehicles took to sea en route back to the ship.

Water began flowing in through several leak-points. While some amount of leakage is expected during amphibious operations, the water is usually drained by on-board bilge pumps before becoming a problem. But that Thursday, a transmission failure left the crew powerless to purge the incoming water.

The craft began to sink.

The crew raised a distress signal, but contrary to Navy and Marine Corps requirements, there were no safety boats in the water. No help would come for another 20 minutes.

The distressed crew and passengers watched the water slowly rise in their vehicle for 45 minutes before a second AAV arrived to assist. The crew then opened a hatch on top of their sinking craft to prepare for evacuation. But the two vehicles collided, knocking the imperiled AAV sideways in the path of a large incoming wave.

The swell flowed over the AAV, now only about 6 inches above the sea, flooding water through the open hatch. The gradual sinking became rapid. Marines on nearby AAVs watched helplessly as the craft slipped below the surface — 11 of the 16 men still aboard.

If the three-man crew would have had the other Marines and sailor aboard the sinking AAV evacuate sooner, even in full gear, the floatation devices they wore would have been enough to keep them afloat, Olson said.

In early August search crews located the sunken AAV nearly 400 feet under the ocean’s surface. The vehicle was recovered, along with the bodies of all of the service members who were missing up to that point still inside.

Vienna on Monday described the terrible impact the loss of his stepson has had on him and Gnem’s mother.

“She’s suffering both mentally and physically,” Vienna said. “For me, well, frankly, the last nine months, I’ve been on suicide watch.”

Ostrovsky also shared his family’s grief and sorrow with the committee.

“The loss of Jack Ryan has destroyed our family’s future plans. Jack Ryan was supposed to be the next leader of our family, who was going to create his own legacy of success through his military career,” Ostrovsky said.

“Though it is little comfort to the families, we will honor their memory by taking the necessary actions to prevent a tragedy like this from ever happening again,” Thomas said.

Marine Commandant Gen. David Berger suspended all AAV waterborne operations the day after the accident while the matter was reviewed. The vehicles remained on land until April 2021.

In subsequent inspections, “We had a problem across the fleet with our watertight integrity: Some 54% of the vehicles that were inspected had failures in the watertight integrity of their plenum doors — that’s the large intakes on the front that permit air to come up in and out of an engine that’s underwater — 18% had cargo hatches that were leaking in excess,” Olson said, “and fully 50% had inoperable emergency escape lighting systems.”

Personnel inside the sinking AAV were in the dark with no working emergency lighting system or chemical lights, which are supposed to be attached to cargo hatch handles by the crew. The men on board resorted to using the flashlights on their personal cellphones as they struggled to open a hatch, the water continuing to rise.

The commanding officers of both 1st Battalion, 4th Marines and the 15th Marine Expeditionary unit have been relieved of posts as a consequence of the accident. A broader command investigation headed by a three-star general was established by Olson on April 2 to look at higher-ranked officers, which could lead to potential disciplinary actions for generals.

Moulton said that while combat training must involve danger, he was not convinced the AAV exercise on July 30 merited the risk.

“The Marine Corps must be the nation’s premier fighting force. We can’t become a Marine Corps that only cares about safety. But we also have to be smart about how we get there,” he said.

All eight Marines killed in the incident served as riflemen in the 1st Battalion, 4th Marines based in Camp Pendleton. The sailor was a Fleet Marine Force corpsman serving alongside them in the infantry unit. Their names, ages and hometowns are as follows: