President Donald Trump’s advisor Stephen Miller lost his White House access on January 20, but he continues to pocket a government paycheck — and is slated to do so until late July, according to government records.

Miller is one of at least 17 people who continued to receive taxpayer-funded salaries while working for Trump’s post-presidential transition office, according to government documents released to Insider under the Freedom of Information Act.

Trump’s post-presidential staff is expected to receive about $1.3 million in federal salary and benefits between January 20 and July 21, when the formal presidential transition period ends, according to an estimate prepared by the General Services Administration.

The documents include previously unreported details about how taxpayer cash is funding Trump’s post-presidential operation. They show which staffers are still working on his transition, where his team is located, and how they’re spending federal funds on everything from stationery engraved with Trump’s initials to a plastic floor mat for use under the former president’s desk chair.

A law titled the Presidential Transition Act gives outgoing presidents and vice presidents government funding and facilities “for use in connection with winding up the affairs of his office.” The benefit lasts for about six months after a president leaves the White House.

Trump routinely boasted about rejecting his publicly funded presidential paycheck and donating his $400,000 annual salary each year that he was in office. Trump likewise could have rejected taxpayer money for his post-presidential operations but chose not to, the GSA records indicate.

For Trump, accepting public money has meant employing 10 transition aides in Palm Beach, Florida — where Trump has been living since he left the White House — and another seven aides in an office building in Arlington, Virginia. The GSA redacted five of the staffers’ names in the documents provided to Insider. 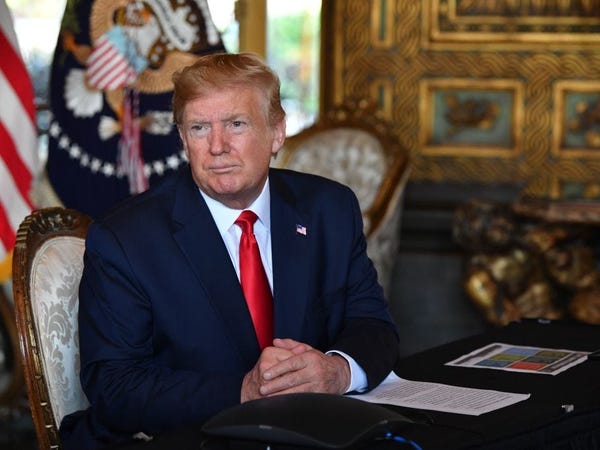 Donald Trump at the Mar-a-Lago estate in Palm Beach Florida, in 2019.Nicholas Kamm/AFP via Getty Images

In addition to six-figure salaries, Trump’s team is charging taxpayers for decidedly pedestrian expenses, too — such as a $74.89 plastic floor mat to go under Trump’s desk chair.

On February 12, Luna submitted a copy of his receipt for the mat — from an OfficeMax in West Palm Beach, Florida — to the GSA for reimbursement.

One day earlier, a GSA employee agreed over email to place an order for four cartridges of printer toner for Trump’s team. Price tag: $397.56.

Harrison asked for $5,000 to be placed on Trump’s Stamps.com account on February 23. Earlier that month, Harrison sent an invoice to GSA asking them to purchase a stationery package for both Donald Trump and Melania Trump.

Trump is separately continuing his political operation, which includes a pair of political action committees called Save America and Make America Great Again.

Trump campaign spokesman Jason Miller did not respond to a request for comment for this story.