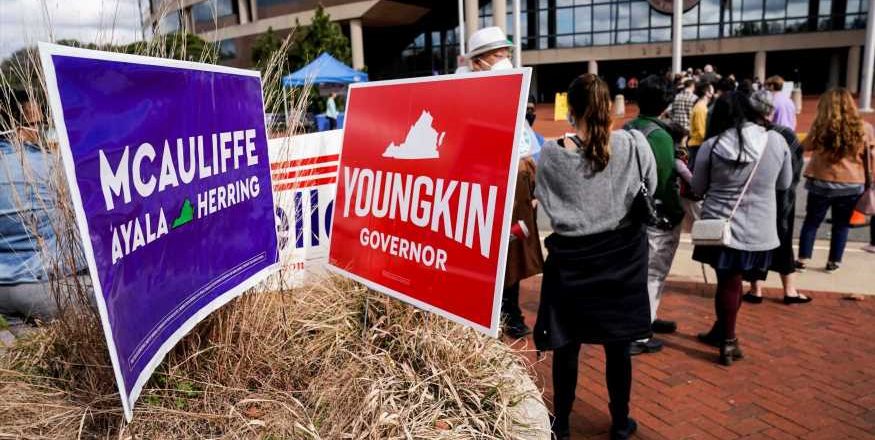 Saturday marked the last day for early voting before the commonwealth's Election Day on Tuesday.

At least 1,137,656 voters submitted early ballots, according to the latest data from Democratic data firm TargetSmart. That makes up roughly one fifth of the state's 5.9 million electorate.

Early voting turnout for this year's election is nearly six times more than the number in 2017. At least 189,891 voters sent in early ballots out of Virginia's 5.4 million electorate at the time, according to TargetSmart.

The dramatic increase comes after new election legislation in the commonwealth and efforts by both candidates to mobilize their partisan bases to vote early.

Stephen Farnsworth, a professor of political science at the University of Mary Washington in Virginia, suggests that this signals a sea change in the commonwealth's voting habits.

Democratic Gov. Ralph Northam, who the candidates are vying to replace, signed legislation into law in April 2020 that allowed registered Virginia voters to request absentee ballots without reason and vote 45 days prior to an Election Day. These expanded early voting options went into effect during the November presidential election that same year.

Prior to the 2020 election, early voting in Virginia lasted for seven days and required an excuse.

"Virginia passed new laws over the past several years that made it much easier to vote by early by mail or via in person early voting," Farnsworth said.

"Voting reform laws changes are the main reason why early voting numbers are so much higher," he continued.

Some Virginia Republicans have criticized the establishment of early voting options, characterizing them as efforts to write partisan advantage into the state's election code. They echo former President Donald Trump, who has loudly discouraged the GOP from voting early and by mail.

Youngkin, by contrast, has aggressively called on his supporters to vote ahead of Election Day.

Leading up to the Oct. 30 early voting deadline, the former Carlyle Group CEO held rallies near early voting locations. His campaign also texted his partisan base to ask if they know their early voting site, and sent door knockers to ask if voters have requested their mail-in ballots.

McAuliffe, who served as governor from 2014 to 2018, also urged his Democratic supporters to vote early.

And data suggests that he has an edge over his GOP opponent in pre-Election Day voting. Democrats make up 53% of the 1.1 million who sent in their ballots early, according to TargetSmart. That compares with 30.9% for Republicans.

"We are substantially leading on the early vote, but we cannot take our foot off the gas," McAuliffe said on Saturday at a rally in Norfolk, according to the New York Times.

He also dispatched some of his party's most prominent stars to campaign with him ahead of Election Day, including former President Barack Obama, Vice President Kamala Harris and President Joe Biden.

On Thursday, Youngkin told NBC News that Trump is "not coming" to Virginia to campaign on his behalf.

"He's not coming," Youngkin said in response to a question from NBC News. "This is about Virginia. And the difference here is Terry McAuliffe can't win and he knows it."

The Republican candidate added that he has not spoken to the former president recently and that he would accept the results of Tuesday's election.

Trump, however, announced Friday that he would hold a tele-rally on the eve of Election Day in support of Youngkin.

In response, Youngkin told reporters on Saturday, "I'm not going to be engaged in the tele-town hall."

Trump expressed his avid support for Youngkin in a statement Monday.

"Hopefully everyone will get out and VOTE tomorrow for Glenn Youngkin, who will be a fantastic Governor for the Great State of Virginia," the former president said in the statement, adding that the Republican candidate has had his "Complete and Total Endorsement for many months!"

The big question for Republicans is whether they catch up to Democrats on Election Day.

Despite the Democratic lead in early voting, recent polling projects that it will be a tight race.

Polls will be open from 6 a.m. to 7 p.m. ET on Election Day Tuesday. Mail-in ballots must be postmarked by 7 p.m. that day and received by noon on Nov. 5.