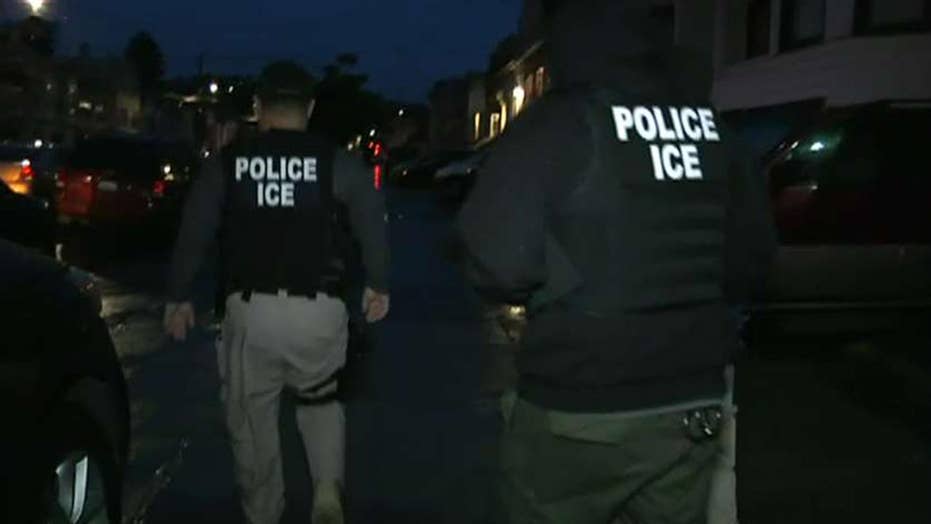 President Trump announced that he is delaying ICE raids for two weeks.

A source familiar with the matter told Fox News that when the operation was in its planning phase two weeks ago, McAleenan ordered ICE Acting Director Mark Morgan to call off the deportation operation that was expected to target 2,000 families in up to 10 cities across the country. President Trump, however, ordered that Morgan continue as planned — until he abruptly announced Saturday he was delaying the raids to see if Congress could work out a solution to the "Asylum and Loophole problems at the Southern Border."

The source told Fox News that Homeland Security officials had been planning the raids since April—prior to former acting ICE director Ron Vitiello’s departure from the administration amid a DHS staffing shake-up—and that McAleenan had been opposed to the plans from the start.

“He is the one that wanted to make sure this operation did not go forward,” the source told Fox News. “He has been fighting this operation since its inception.”

On Friday, The Washington Post published a story with explicit details of the planned raids, citing U.S. officials familiar with the operation. The story, written by Post immigration reporter Nick Miroff, said the raids would take place before dawn, in major cities including Houston, Chicago, Miami and Los Angeles. Miroff also reported that the planned raids would begin on Sunday.

Tom Homan, the former head of ICE, first suggested in an interview Saturday on "Fox & Friends" that McAleenan was behind that story as he accused the DHS leader of working against the ICE operation.

“You’ve got the acting secretary of Homeland Security resisting what ICE is trying to do,” Homan said. “He does not support this operation, and I tell you what, if that’s his position, then he’s on the wrong side of this issue.”

The source familiar with the matter also told Fox News that McAleenan traveled on a government plane to the border with Miroff, just 48 hours before the story was published.

“To have somebody within DHS leak this information that would have put the general public, as well as our officers in danger—that is one of the most egregious leaks I have ever seen in my life,” the source told Fox News, noting that “you can’t go forward with an operation once everyone knows the time, the place, the details. ICE officers and other law enforcement would have been put directly in harm's way.”

Sources also told The Washington Examiner that McAleenan was behind the leak.

Representatives for DHS and ICE have not responded to Fox News’ request for comment on the allegations against McAleenan.

Following the publication of the Post story, ICE said in a statement that “due to law-enforcement sensitivities and the safety and security of U.S. Immigrants and Customs Enforcement personnel, the agency will not offer specific details related to enforcement operations.”

ICE did say, however, that it prioritizes arresting and removing those illegal immigrants “who pose a threat to national security, public safety, and border security.”

By Saturday morning, the president announced that the plan would be delayed for two weeks to give congressional Democrats and Republicans time to come to a bipartisan solution on the border crisis. Trump warned, though, that if an agreement could not be reached, deportations would begin.

The change of plans came after Trump, earlier in the week, said that ICE would “begin the process of removing millions of illegal aliens who have illicitly found their way into the United States.”

On Saturday night, in an interview with Jeanine Pirro on Fox News' “Justice with Judge Jeanine,” Morgan said the postponement of the raids would “give Congress another chance on a bipartisan method to actually get together, pass this supplement, so that we can enforce the rule of law, positively impact this crisis and maintain the integrity of this system.”

He added: “I’ve got the green light to, anyone that’s here in violation of federal immigration law, I have the authority and the support to go after them, apply consequences, and remove them.”