High above the West Coast, flying home from a diplomatic mission to Asia, National Security Adviser Robert C. O’Brien reflected on the notion that tough love is the finest love of all.

Sometimes only a close friend has the concern or the courage to say what others won’t: Put down the fork, put away the bottle, or pay your bills — before you get into deeper trouble. Far better to hear such advice from a friend than from a boss, business partner, or banker.

“It’s counterintuitive to some on the left, who believe that subservience, acquiescence, and enabling our friends somehow helps them,” O’Brien told me Monday, as the clouds zipped past his cabin aboard the customized 757 with UNITED STATES OF AMERICA emblazoned across its fuselage. “What helps them is to be candid, truthful and frank with them about what we can and can’t do, and what we need them to do.”

Leftist Joe Biden foolishly denounces President Trump’s therapeutic prodding of some U.S. strategic associates as a diabolical effort to “reject our allies” and “retreat from” the world.

O’Brien cites “burden-sharing” as one example of Trump’s tough love. “It’s NATO increasing their defense spending by $400 billion over a 10-year period. That makes the West safer. It makes Europe safer.”

This is precisely what Trump envisioned at his first Atlantic-alliance summit in May 2017. “NATO members must finally contribute their fair share and meet their financial obligations,” Trump said, “for 23 of the 28 member nations are still not paying what they should be paying and what they’re supposed to be paying for their defense.”

Many allies are heeding Trump’s calls to lift the free weights. “In 2016, only four NATO members (including the U.S.) met the benchmark to spend 2 percent of GDP on defense,” Kochis wrote. 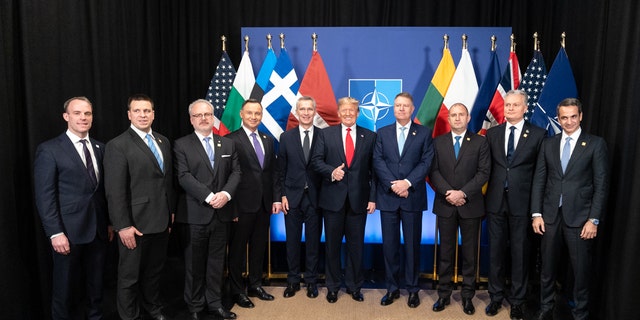 “Since 2016, NATO Secretary-General Jens Stoltenberg noted that European allies and Canada will have added $130 billion to their defense budget,” Kochis explained.

An additional $270 billion have been pledged through 2024. “This is unprecedented progress,” Stoltenberg declared.

The biggest outlier is also Europe’s richest nation, which makes its parsimony so noisome.

“As Europe’s major player and wealthiest economy, Germany has been particularly ‘delinquent’ — barely reaching 1.3 percent of GDP for defense,” wrote Paul Crespo, managing editor of American Defense News and a Georgetown University classmate of mine. “This is one reason Trump finally decided to pull several thousand U.S. troops from Germany this year and redeploy some to the more vulnerable Baltic nations and frontline NATO ally Poland on Russia’s border.”

Trump’s placement of American GIs on Russia’s western front should fling a fresh, hot dagger into the festering carcass of the “Trump is a Kremlin asset” Big Lie.

O’Brien observed that U.S. taxpayers are not the only beneficiaries of these nations’ fatter checks.

“This also gives the NATO countries the capacity to help in military operations, not just in Europe, but around the world. Right now, there are more NATO troops in Afghanistan than U.S. troops,” O’Brien explained. “In Africa and the Sahel, there are 5,000 French troops, additional NATO troops, and less than 1,000 U.S. troops fighting an al-Qaeda affiliate there called JNIM” or Jamaat Nusrat al-Islam wal-Muslimin.

“That’s the type of burden-sharing that’s great for America, where we bring our unique capability, where we bring our enablers, our close-air support, our combat-medical support, our intelligence, our surveillance, and we can do that in smaller numbers, and our allies can provide a large number of the troops,” O’Brien added. “And that’s how it should be. And that’s something that’s been developed under President Trump.”

The president also is pressuring Berlin to scrap the Nord Stream 2 natural gas pipeline, which would import Russian energy. “Germany will have almost 70 percent of their country controlled by Russia with natural gas,” Trump said in Brussels in July 2018. “You tell me, is that appropriate?”

While America and Germany sometimes disagree, the United States will not shut the gas spigots in deepest winter to demand concessions, as Russian President Vladimir Putin did in January 2009. Moscow halted natural gas from going to Ukraine, and downstream customers shivered.

Putin did likewise with oil shipments to Belarus last January.

A back rub for Angela? No. Tough love? Yes.

“You see the Japanese starting to spend more money and improve their capabilities,” O’Brien stated. In fact, President Trump reportedly pressed Tokyo to quadruple its annual payments from $2 billion to $8 billion for some 54,000 U.S. troops stationed in Japan.

“The President has made clear that allies and partners should contribute more to their shared defense,” a State Department spokesman told Reuters in an emailed statement in November 2019.

In response, Japan will spend a record $55 billion on defense next year, 8 percent above 2020’s outlay. These funds will help acquire U.S. stealth fighters, among other arms.

“You also see increased defense spending in Taiwan, which is something that the president has been advocating for some time,” O’Brien said. Taiwan’s Cabinet announced last month a 10.25 percent hike in next year’s military budget totaling $1.5 billion. Taipei spent $1 billion in August for 66 U.S. F-16V fighter jets and plans to purchase some $10 billion in U.S. mines, drones, coastal-defense cruise missiles and other weapons that should give China pause.

While Joe Biden and Hate Trump, Inc. hammer the president for expecting America’s friends to fulfill their potential, the National Security Council chief believes this approach spreads good in multiple directions. “All of these things make those countries safer,” O’Brien said. “They have the result of strengthening our alliances.”

Deroy Murdock has known O’Brien since they won college scholarships from the Washington Crossing Foundation in the 1980s.