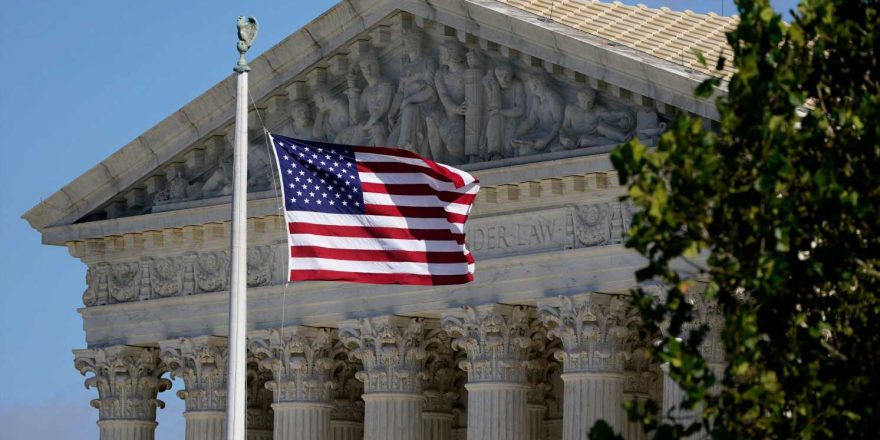 On March 2, Democratic Rhode Island Sen. Sheldon Whitehouse posted a tweet in which he calls Jan. 6, the day pro-Trump rioters ransacked the Capitol, a “day that will live in infamy,” but adds that Jan. 8 “may prove to be a day of greater consequence.”

Backed by music likely deemed too depressing to be used in the film “Manchester by the Sea,” Whitehouse condemns a case accepted by the U.S. Supreme Court that will determine whether donors to nonprofit organizations have the right to keep their information private if those nonprofit groups engage in anything that resembles politics.

To prove his case, Whitehouse — who is fond of attending Senate hearings with elaborate charts alleging conspiracies between Republican elected officials and these types of nonprofits — says we should “look at the flock of dark money front groups” that urged the conservative-majority Supreme Court to take the case. On the tweeted video, he alleges that “dark money forces shepherded the last three justices onto the Supreme Court.”

But when Whitehouse’s video scrolls through its list of these contemptible right-wing “dark money front groups,” he leaves off some crucial information.

The issue of anonymous free speech

Yes, among the groups that supported the court taking the case were notable right-wing groups like Americans for Prosperity, the Institute for Justice, the U.S. Chamber of Commerce and others. But Whitehouse’s list was missing groups like the ACLU, the NAACP and the Human Rights Campaign, all politically progressive groups that filed amicus briefs supporting the right of donors to keep their information private.

The issue of donor disclosure by nonprofit groups has once again surfaced in legislative form, as HR1, a bill passed by the Democratic-controlled House of Representatives last week, applies new disclosure regulations to groups engaging in political speech.

A number of the bill’s speech regulations echo those of the famous Bipartisan Campaign Reform Act of 2002 (colloquially known as “McCain-Feingold”), which has subsequently been dismantled by the Supreme Court on First Amendment grounds.

The most famous of these rulings, of course, was 2010’s Citizens United v. the Federal Election Commission, which effectively got the government out of the business of banning movies, books and campaign ads critical of politicians.(As a presidential candidate, Donald Trump even threatened to sue an artist that painted a nude picture of him that suggested … uh … maybe he should have applied his favorite insult — “liddle” — to himself.)

Those same political speech protections extend to anonymous speech, which has been a cornerstone of activism since a trio of Founding Fathers banged out The Federalist Papers under the name “Publius.” Benjamin Franklin famously wrote political tomes under names like “Benevolus,” “Silence Dogood,” “Caelia Shortface” and “Martha Careful.”

Our View: Domestic terrorism stalks lawmakers and the US Capitol. So why is Congress still bickering?

Anonymous political speech allows a speaker to criticize government without fear of retribution from that same government. In one of the first landmark free speech court cases, Schenck vs. United States, the Supreme Court upheld a conviction against socialist Charles Schenck, who printed leaflets urging U.S. citizens to oppose the draft leading up to World War I. Schenck had spent $125 to mail his fliers opposing conscription, and was sentenced to six months in prison.

Similarly, speech disclosure regulations by the government open individuals who want to quietly support political causes up to bullying and harassment. In the 1950s, Alabama cracked down on the NAACP, demanding to see a list of its members. But in 1958, the Supreme Court found in favor of the NAACP, ruling that “compelled disclosure of affiliation with groups engaged in advocacy may constitute (an) effective … restraint on freedom of association.” The court noted past membership lists being made available subjected members to “economic reprisal, loss of employment, threat of physical coercion, and other manifestations of public hostility.”

Similarly, in an amicus brief to the case pending before the Supreme Court, the LGBTQ-friendly Human Rights Campaign notes that its group “periodically receives contributions from donors who wish to remain anonymous, pseudonymous, or discreet,” and that its “members, supporters, and staff have faced threats and harassment and reasonably expect to encounter them in the future.”

LGBTQ rights: After Trump sabotage, 3 things Biden must do to restore gay, lesbian and trans rights

It simply makes no sense that voting should be strictly anonymous, while speech — or merely talking about voting — should be subject to legal disclosure regulations. If made law, HR1 would require a ridiculous scheme in which the federal government would have to decide what tweets, videos and other advertisements to regulate based on what constitutes “political speech.” In an era when more people have the ability to use social media to speak on political matters, regulation of such speech is nearly an impossibility.

Or, as Chief Justice John Roberts has said, “We don’t put our First Amendment rights in the hands of FEC bureaucrats.”

Thus, everyone should have the right to speak out on politics — whether you’re a group interested in less government or LGBTQ rights, or an ill-informed U.S. senator trying to score misleading political points.

Christian Schneider is a senior reporter for The College Fix, a subsidiary of a nonprofit organization that engages in public speech. Follow him on Twitter: @Schneider_CM