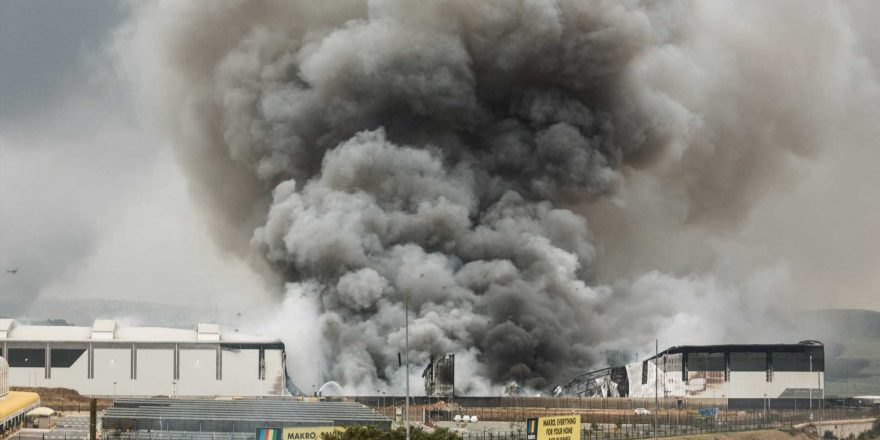 Deaths climb to 72 in South Africa riots after Zuma jailed

The death toll climbed to 72 from rioting in South Africa on Tuesday, with many people trampled to death during looting at stores, as police and the military fired stun grenades and rubber bullets to try to halt the unrest set off by the imprisonment of former President Jacob Zuma.

More than 1,200 people have been arrested in the lawlessness that has raged in poor areas of two provinces, where a community radio station was ransacked and forced off the air Tuesday and some COVID-19 vaccination centers were closed, disrupting urgently needed inoculations.

Many of the deaths in Gauteng and KwaZulu-Natal provinces occurred in chaotic stampedes as thousands of people stole food, electric appliances, liquor and clothing from stores, police Maj. Gen. Mathapelo Peters said in a statement Tuesday night.

He said 27 deaths were being investigated in KwaZulu-Natal province and 45 in Gauteng province. In addition to the people crushed, he said police were investigating deaths caused by explosions when people tried to break into ATM machines, as well as other fatalities caused by shootings.

The violence broke out after Zuma began serving a 15-month sentence for contempt of court on Thursday. He had refused to comply with a court order to testify at a state-backed inquiry investigating allegations of corruption while he was president from 2009 to 2018.

The unrest spiraled into a spree of looting in township areas of the two provinces, although it has not spread to South Africa's other seven provinces, where police are on alert.

More than half of South Africa's 60 million people are living in poverty, with an unemployment rate of 32%, according to official statistics. The pandemic, with job layoffs and an economic downturn, has increased the hunger and desperation that helped propel the protests triggered by Zuma's arrest into wider rioting.

As he spoke, the broadcast showed police trying to bring order to the Ndofaya shopping mall, where 10 people were crushed to death in a looting stampede. Gunshots could be heard in the background.

Makhura appealed for leaders of political, religious and community organizations to urge people to halt the unrest.

The deployment of 2,500 soldiers to support the South African police has so far failed to stop the rampant looting, although arrests were being made in some areas in Johannesburg, including Vosloorus in the eastern part of the city.

At least 1,234 people were arrested in Gauteng and KwaZulu-Natal, authorities said, but the situation was far from under control.

Looting continued Tuesday in shopping malls in Johannesburg township areas, including Jabulani Mall and Dobsonville Mall in Soweto. There also were reports of looting in KwaZulu-Natal.

In Daveyton township, east of Johannesburg, more than 100 people, including women, children and older citizens, were arrested for stealing from shops inside the Mayfair Square mall.

Some of those arrested were bleeding from shattered glass on floors slippery from spilled milk, liquor, yogurt and cleaning liquids that had been stolen from shops.

Running battles carried on as security and the police fired stun grenades and rubber bullets to push back rioters, who were entering the shops by going through delivery entrances, emergency exits and climbing on roofs.

Bongani Mokoena, an employee at an auto supply store, said the rioters had taken everything from the shop, including batteries and shock absorbers.

By late afternoon the police managed to secure the mall, but rioters remained outside, throwing stones at the police and shouting for the release of those arrested. As evening fell, more rioters gathered around the mall and police set up barricades to try to keep them away.

In Soweto, the Chris Hani Baragwanath hospital reported that the number of injured people coming to the emergency ward had tripled from the daily average. The unrest forced the government to close some COVID-19 vaccination centers, disrupting urgently needed efforts to inoculate thousands of those aged 50 and older per day.

In Johannesburg's Alexandra township, the Pan Africa shopping center continued to be ransacked and was set on fire on Tuesday.

The Alex FM radio station, which has served the Alexandra community for 27 years, was broken into at 2 a.m. Tuesday and thieves stole equipment worth 5 million rand ($350,000), forcing the station off the air, station manager Takalane Nemangowe said.

"Our on-air presenter and security guards got out safely through the back door," Nemangowe told The Associated Press. "But the looters cleaned out our offices. They took all our broadcasting equipment, computers, laptops, microphones, everything."

Nemangowe said that no police or army had been patrolling the area. The Alex FM station is community-funded and runs a training program for young residents, he said. "We were the voice of the voiceless here in Alexandra. And now we are silent. It is really sad."

But Nemangowe had not given up hope. By Tuesday afternoon he and other staff had been offered facilities at a radio station in the nearby affluent Sandton suburb where they were trying to start beaming back to the Alexandra community.

Authorities have repeatedly warned people, including Zuma supporters and relatives, against using social media to encourage the riots. Police minister Bheki Cele said Tuesday that about a dozen people have been identified as having instigated the riots.

The Constitutional Court, the country's highest, heard Zuma's application to have his sentence rescinded on Monday. Zuma's lawyer argued that the top court made errors when sentencing Zuma to prison. After 10 hours of testimony, the judges said they would announce their decision at a later date.