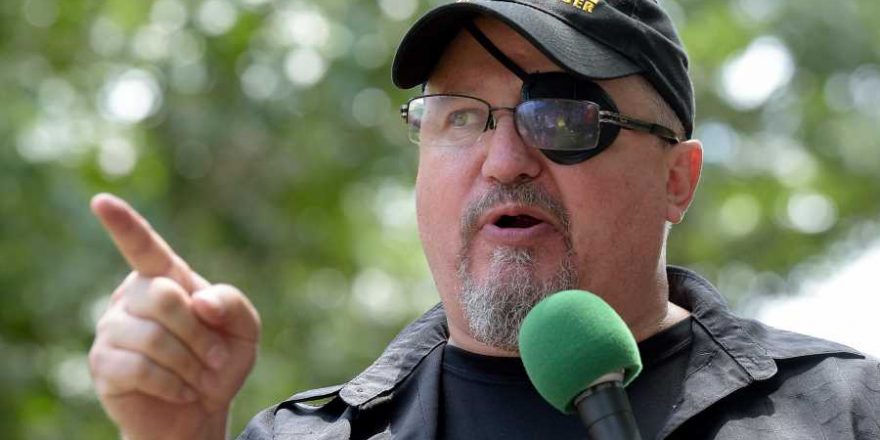 Caught on Tape: Oath Keeper Leader Wanted Trump to 'Expose all the Pedophiles'

In the buildup to the Jan. 6 insurrection, Oath Keepers militia founder Stewart Rhodes insisted that Donald Trump could cling to office by exposing the “pedophiles” holding high offices in the federal government. Rhodes also told his followers that their purpose in staging a show of force in Washington, D.C., was to give Trump “positive pressure” to expose the demonic nature of the “deep state.”

“You’ve got to make sure that he knows that you are willing to die to fight for this country,” Rhodes said.

The militia leader’s comments appear in a transcript of an Oath Keepers GoToMeeting web conference recorded on Nov. 9, 2020 that was presented in a recent federal court exhibit filed on behalf of fellow Oath Keeper, Edward Vallejo. Like Rhodes, Vallejo is charged in with seditious conspiracy for seeking to block the transfer of presidential power by force.

How True Is 'Respect'? Fact-Checking the Aretha Franklin Biopic

Rhodes’ comments reflect a belief system that is — if not full QAnon — at least adjacent to the unfounded conspiracy theory. QAnon holds that the government is infested with Satanic pedophile Democrats, and Q adherents have cast Trump as a hero who can expose the evildoers and vanquish their “deep state” power. While the Oath Keepers movement is also steeped in conspiratorial thinking, traditionally the militia’s paranoid ideology has been preoccupied with tyrannical gun-grabbers or warrant-less federal searches — not demonic, child-abusing politicians.

Speaking to trusted Oath Keeper deputies shortly after Joe Biden’s resounding electoral victory, Rhodes argued that Trump should fight to stay in office, and that he needed to “declassify all of the dirty secrets” of government officials in a “massive” data-dump in order to build support. After seeing the rot exposed, Rhodes insisted, “the people will turn against the deep state” and help Trump emerge triumphant.

The Oath Keepers leader imagined the Trump-directed leaks building slowly. “All he’s got to do is go and declassify the first record of some pedophile who’s in the Congress, and then another one, and put the videos online and let the people watch them,” Rhodes said. “Everyone will see it. You can’t stop that. Once he discloses the first handful of pedophiles who are in office, then the avalanche can keep on coming.”

As part of that “avalanche,” Rhodes wanted Trump to expose not just “crooked politicians” but also “corrupt, sold-out pedophile judges.” After Trump’s data-dump, Rhodes said, “The mask will come off, the curtain will be pulled back, and we’ll see … the little demon behind it.”

Rhodes’ Q-inflected rhetoric may seem jarring, but Michael Jensen, lead investigator of the Domestic Radicalization Project at the University of Maryland, argues that the gruff, militant Oath Keepers and the extremely online adherents of QAnon had begun to cross pollinate by the 2020 election. “You don’t think of them having a lot of ideological common ground,” Jensen says, but they share “the same set of villains,” QAnon denouncing the rule of a secret “cabal” and the Oath Keepers obsessing over a corrupt elite they call the “globalists.”

“If you believe that there’s this group of globalists — liberal elites that are going to strip you of all your rights — it’s not much of a leap to go, ‘Oh, by the way, they’re also involved in this pedophilia ring,’” Jensen says. By 2020, the Oath Keepers had also abandoned some of their distrust of the federal government and come to view Trump as their champion. “He becomes the savior in their story,” Jensen says, “just as he always was in the QAnon story.”

But the militia leader insisted that only a show of force by groups like the Oath Keepers would steel Trump against “the snakes that are in his ear right now, encouraging him to quit, like Kushner” — an apparent reference to Trump’s son-in-law Jared Kushner. “We have to propel Trump to do what he can,” Rhodes insisted.

Rhodes even argued that the “deep state” revelations could draw the U.S. military into the fight to preserve Trump’s power. “If the President does a data dump, exposes all the pedophiles … then you’ll have a vast majority of your fighters in the military” join with the Oath Keepers, Rhodes predicted. “Only the fully corrupt ones will be on their side; the ones who have everything to lose.”

A message to Rhodes’ attorneys seeking comment or contextualization of the GoToMeeting transcript was not immediately returned.

QAnon had its own, outsize presence on Jan. 6. The shirtless “QAnon Shaman” immediately became an icon of the insurrection. Symbols representing QAnon were on display throughout the attack on the Capitol, and a belief in the conspiracy theory has been a theme of court proceedings of many rioters facing charges. The Oath Keepers — in their fatigues and military “stack” formations — appeared to represent a discrete faction, and the federal government has certainly prosecuted them as such.

“You think of the Oath Keepers as the retired law enforcement officers and the veterans, and you think of QAnon as the shaman with with the horns and the face paint — they seem just radically different,” Jensen says. But these superficial differences, he argues, masks an uglier truth about Jan. 6: “When you look at the people who were involved, there was a lot of overlap in terms of a shared set of ideas.”