New York (CNN Business)A version of this article first appeared in the “Reliable Sources” newsletter. You can sign up for free right here.

“Television is often the problem, but sometimes it’s the answer, too.”

I know many people who work in the television business can relate to those words.
WaPo’s Hank Stuever wrote ’em the other day while reflecting on the worldwide impact of “Sesame Street.”
Stuever said the show “can feel deeply personal to just about anyone under the age of 55. It taught us to read and count, but it also taught us about kindness and acceptance.” These days is “brighter, faster and somehow zippier… yet the sense of belonging remains. ‘Sesame Street’ was inclusive before anyone really knew what that meant, the first safe space. It is a friend to everyone, which has a lot to do with why it’s the first TV show to receive Kennedy Center Honors.”

Yes, the Honors -— the ceremonies are being held in Washington on Sunday night — and “Sesame Street” co-founders Joan Ganz Cooney and Lloyd Morrisett are there to accept the award. 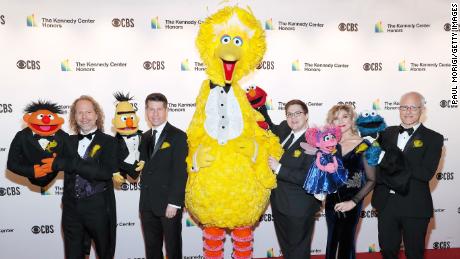 If any TV show deserves the Kennedy Center’s recognition, it is “Sesame Street.” So it’s worth taking a moment to appreciate what shows like “Sesame Street” can achieve… and as Stuever wrote, how television can be the answer rather than the problem.
And on the same day as the Honors…

CNN’s Alaa Elassar reports: “Caroll Spinney, the puppeteer who brought beloved ‘Sesame Street’ characters Big Bird and Oscar the Grouch to life, died on Sunday, according to Sesame Workshop. Spinney passed away at his Connecticut home after battling dystonia, a common movement disorder. He was 85.” Spinney stepped down from his puppeteering roles last year.
>> From the archives: The Globe and Mail and The New Yorker penned lovely features about Spinney, and the documentary “I Am Big Bird” is available via VOD and rental sites…

This year’s other honorees are Earth, Wind & Fire, Sally Field, Linda Ronstadt and Michael Tilson Thomas. Past presidents usually attended the DC tradition, but Trump is skipping the Honors for the third straight year. Of course, as the AP’s story noted, some past honorees talked about possibly boycotting the event if Trump was in attendance…
Read more of Sunday’s “Reliable Sources” newsletter… And subscribe here to receive future editions in your inbox…

During Saturday’s State Department dinner for the honorees, Mike Pompeoinvoked Ronstadt’s 1975 hit “When Will I Be Loved” by saying to her, “And I will say my job, as I travel the world, I just want to know when I will be loved?”
“Later, when Ronstadt had the opportunity to take the microphone, she delivered her response,” Variety’s Paul Harris reported. “In front of more than 200 guests, Ronstadt, who has been an outspoken critic of the Trump administration, stood up and looked straight at Pompeo’s table and said, ‘I’d like to say to Mr. Pompeo, who wonders when he’ll be loved, it’s when he stops enabling Donald Trump.'”
Source: Read Full Article