Home » Politics » Bob Dole Has Stage 4 Lung Cancer and Will Start Treatment Next Week: 'I Have Some Hurdles Ahead' 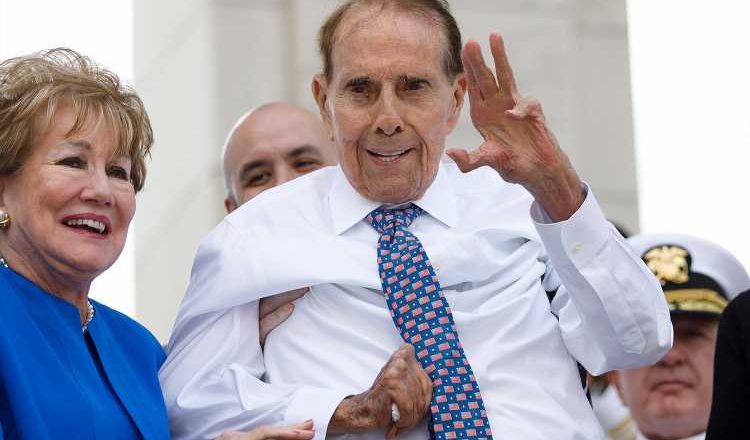 Bob Dole Has Stage 4 Lung Cancer and Will Start Treatment Next Week: 'I Have Some Hurdles Ahead' Former Republican presidential and vice-presidential nominee Bob Dole — an Army veteran who spent nearly 30 years in the Senate — has stage four lung cancer and will begin treatment next week.

Dole, who turned 97 in July, announced his diagnosis in a statement on Thursday morning. He said he was "recently" diagnosed and would start treatment on Monday.

"While I certainly have some hurdles ahead, I also know that I join millions of Americans who face significant health challenges of their own," he said.

Dole has had previous health issues, including a 1991 surgery to remove his prostate gland, which was found to have a "slow-growing cancer," according to The New York Times.

He served as a Kansas senator from 1969 to 1996, where he was twice the majority leader in his final decade in office.

He also twice served on a presidential ticket: First, in 1976, when President Gerald Ford's chose him as his running mate, though they were ultimately defeated by Jimmy Carter.

He was the Republican nominee in 1996, though he lost to President Bill Clinton.

Dole resigned from the Senate during that campaign and did not seek public office again.. He went on to work as a lobbyist, a political commentator and even occasionally made his way onto television, serving as a spokesperson for a range of products, such as Viagra and Dunkin' Donuts. (He appeared in a 2006 Pepsi commercial alongside Britney Spears, which aired during the Super Bowl.)

In 2003, he launched the Robert J. Dole Institute of Politics, located at the University of Kansas campus. Dole's wife, Elizabeth, served as a senator herself, representing North Carolina from 2003 to 2009. The two ran into one another in 1972 at his office.

"All of a sudden, the side door opens and in comes Bob Dole. And I look up and I think, 'Gee, he's a good-looking guy,' " Elizabeth said in 2019 of seeing her husband, then a rising Republican star, for the first time. "And he says he wrote my name on the back of his blotter."

A birthday toast for the couple was facilitated by Today's Savannah Guthrie in July.

Several figures from both sides of the political aisle popped up to send well wishes for the couple, including former Presidents George W. Bush and Clinton.

"Happy birthday to both Elizabeth and Bob Dole: two great Americans, two wonderful people and two friends," said Bush, 74, in a video message, as Clinton, 73, said: "Bob and Elizabeth, happy birthday. I'm glad to add my voice to the many thousands of people who wish you that."

"And always thank you for setting examples of working in good faith to find common ground," added Clinton, who beat Dole, then the Republican candidate in the 1996 presidential election.

House Speaker Nancy Pelosi was also on hand to share kind words with the Doles.

"Mr. Leader you are a person of great integrity and deep dignity and extraordinary courage," said Pelosi, 80. "Elizabeth, you are an angel, and everybody knows that too. You are both American heroes."