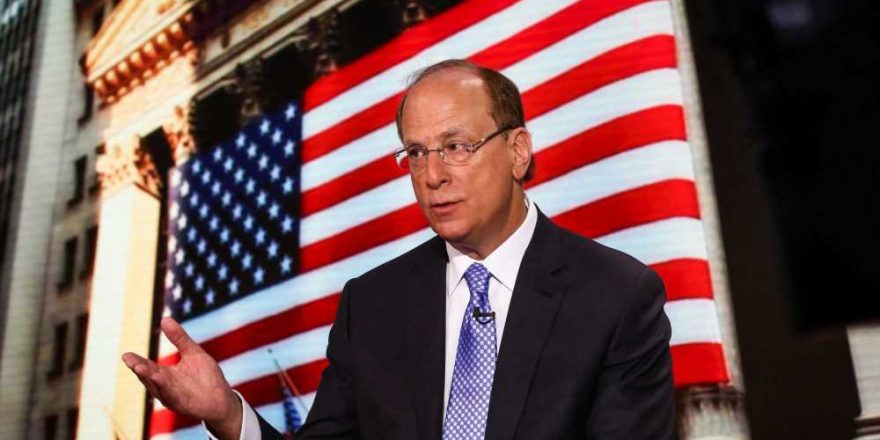 Big companies and banks shouldn't be the only "climate police" in the world, says BlackRock Chief Executive Larry Fink, who called on governments and society to play their part in climate change.

"If governments are only asking public companies to move forward, and which are mostly large companies, then we're going to be asking the large companies to be the climate police. And I don't think that's our role," he said, speaking virtually at the Ecosperity climate conference in Singapore.

If the world is going to move to net-zero emissions, then "we can't just ask these public companies to move forward," said Fink.

"There lies the fundamental problem and that's what I'm really worried about. I don't want to be the environmental police," he said. "I don't want BlackRock — because we're a large investor — to be telling every company who's not moving forward [that] we're going to divest of all your shares. That's not a good outcome."

Net-zero emissions, also known as carbon neutrality, is achieved when an entity removes as much carbon dioxide and other greenhouse gases from the atmosphere as it releases into it.

The smart grid of the future requires billions in upgrades. These stocks will benefit

The European Union this year introduced major new rules that require asset managers, pension funds and insurers to disclose how they consider environment, social and governance (ESG) issues in their investment decisions.

In the U.S., the Securities and Exchange Commission is moving closer to requiring carbon disclosures from companies as investor concerns about the material impact of climate change on financial performance continue to escalate.

Environmental activists are 'not being thoughtful'

Fink said that while environmentalists have "played a big role" in lobbying for change from asset managers, he doesn't "necessarily agree with what they're talking about."

"I believe they're not being thoughtful in terms of the realities of how politicians can move forward or for that matter a corporation," he said.

Fink also pointed out that BlackRock acts on behalf of the interests of their clients. The environmentalists can "protest all they want," but "a higher law than their views" is acting on behalf of clients.

"It is not our money. If a client wants us to invest in an XYZ index, and that XYZ index has, you know, 8% allocation to dirty hydrocarbons — other than the whole — we have to be a fiduciary and invest in it."

"So my frustration with some of the environmentalists, related to finance, they have to understand the role of finance and the role of asset owners versus asset advisors," Fink said.

As firms increasingly come under pressure to move to net-zero, some companies have managed to circumvent the rules around those climate targets, Fink pointed out.

"Public companies are selling their dirtiest hydrocarbons, so that public company looks much better," he said.

While he did not name any company, there have been recent reports of top oil companies selling off their oil assets with the most emissions to meet their net-zero targets.

"But the carbon footprint of the world hasn't changed, it's now even more opaque," Fink said.

He also said there will be "even more inequality" between the developed and the developing countries, as the world manages climate change.

But that can be mitigated if global governments come together, he said.

"If we are truly trying to eliminate the threat of two or three degree increases in temperatures, it is not going to happen [if] we're being dishonest with ourselves, and we think we get that just by asking a bunch of public companies to move forward," Fink reiterated.

"We need boldness by governments — not just boldness by a couple CEOs, because we know our power to move the curve is very small … we need to do this together," he said.