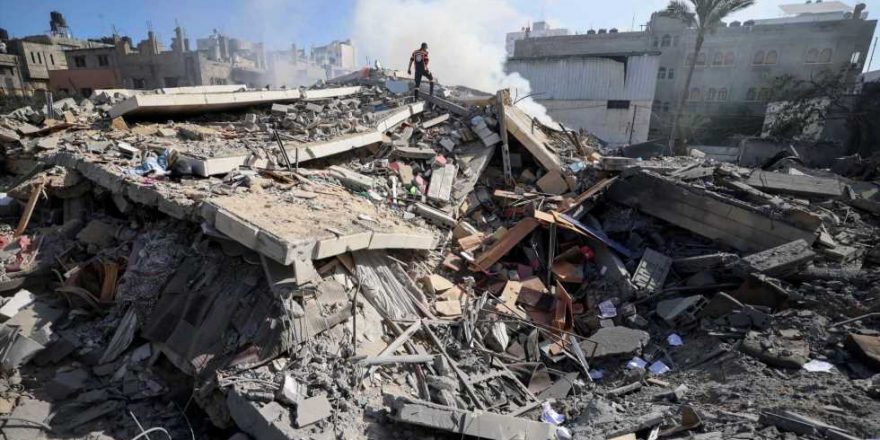 During a phone call with Netanyahu, the president reiterated his support for Israel's right to self-defense against rocket attacks from the militant group Hamas in Gaza and condemned attacks in towns and cities in Israel, according to a readout released by the White House.

"The President noted that this current period of conflict has tragically claimed the lives of Israeli and Palestinian civilians, including children," the readout said. "He raised concerns about the safety and security of journalists and reinforced the need to ensure their protection."

Netanyahu told Biden that Israel "is doing everything to avoid harming" those who aren't involved with Hamas and that "those not involved" were evacuated from the 12-story building in the Gaza Strip that housed the offices of The Associated Press and Al Jazeera. Three Israeli heavy missiles collapsed the building on Saturday.

"Netanyahu thanked the President for the unreserved support of the United States for our right to defend ourselves," according to a readout of the call released by Netanyahu's office.

The president spoke with Abbas about tensions in Jerusalem and the West Bank and their shared interest in making Jerusalem "a place of peaceful coexistence for people of all faiths and backgrounds."

"The President also underscored his strong commitment to a negotiated two-state solution as the best path to reach a just and lasting resolution of the Israeli-Palestinian conflict," according to a readout from that call.

The extraordinary conflagration in Israel and the Gaza Strip has evolved into an urgent early test for Biden's foreign policy. The president was working in the Oval Office for a periodd of time on Saturday. He usually works from Camp David or his home state of Delaware during weekends.

News that media offices were destroyed triggered international outrage and shock, prompting the White House to respond before the Biden readouts were released.

The Biden administration has "communicated directly to the Israelis that ensuring the safety and security of journalists and independent media is a paramount responsibility," White House press secretary Jen Psaki wrote in a tweet on Saturday.

The president of the Associated Press, in a statement Saturday, said a dozen AP journalists and freelancers evacuated the building before the strike, but a "terrible loss of life" was narrowly avoided even with advance warning from Israel that the building would be hit.

"We are shocked and horrified that the Israeli military would target and destroy the building housing AP's bureau and other news organizations in Gaza," said AP President and CEO Gary Pruitt. "They have long known the location of our bureau and knew journalists were there. We received a warning that the building would be hit."

"This is an incredibly disturbing development," Pruitt said of the airstrike.

Al Jazeera's director general accused Israel of trying to silence the media and condemned the airstrike as a war crime, calling on the international community to hold Israel accountable.

"The destruction of Al Jazeera offices and that of other media organizations in al-Jalaa tower in Gaza is a blatant violation of human rights and is internationally considered a war crime," said Dr. Mostefa Souag, acting director general of Al Jazeera Media Network, in an article posted on the news agency's website.

"The aim of this heinous crime is to silence the media and to hide the untold carnage and suffering of the people of Gaza," Souag said.

Sen. Bob Menendez, D-N.J., chairman of the Senate Foreign Relations Committee, in a statement Saturday called for a "full accounting of actions that have led to civilian deaths and destruction of media outlets."

"All political and military leaders have a responsibility to uphold the rules and laws of war and it is of the utmost importance for all actors to find ways to deescalate and reduce tensions," he said. "This violence must end."