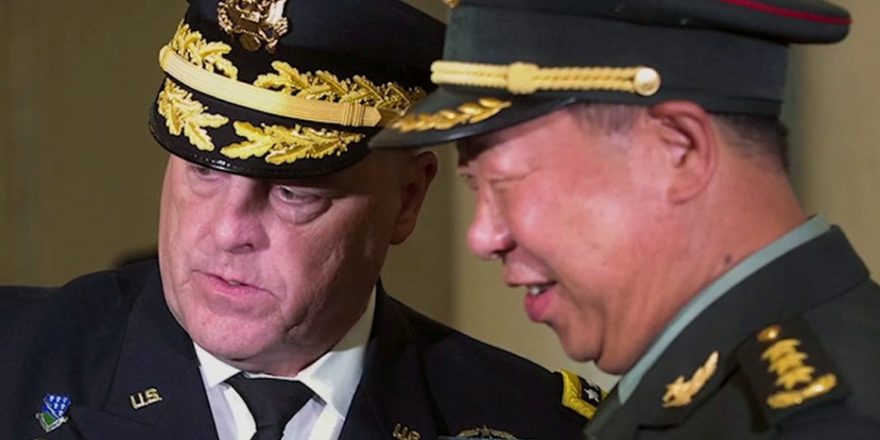 Rand Paul calls on Gen. Milley to take polygraph, be removed if talks with China confirmed

Sen. Rand Paul, R-Ky., said that the top general should be interviewed, polygraphed, and asked if he committed treason against the U.S. government

President Biden said he has “great confidence” in Chairman of the Joint Chiefs of Staff Gen. Mark Milley, amid allegations that he held “secret” phone calls with his Chinese counterpart.

Biden made the one-sentence remark while responding to reporters’ questions during a meeting with business leaders. Milley has faced calls for his resignation, but White House press secretary Jen Psaki also defended Milley Wednesday.

Biden “has worked side by side with Chairman Milley for almost eight months as the chairman of the Joint Chiefs,” Psaki said. “His experience with him has been that he is a patriot.”

“He is somebody who is is has fidelity to the Constitution, and he has confidence in his leadership,” she continued. “I can’t speak to anonymous, unconfirmed reports about prior conversations during the last administration.”

Psaki added that the president “knows Gen. Milley,” and said  “they’ve worked side by side through a range of international events.”

“The president has complete confidence in his leadership, his patriotism and his fidelity to our Constitution,” Psaki said.

Milley has come under fire after allegations included in the book “Peril,” co-written by Washington Post reporters Bob Woodward and Robert Costa, were made public that Milley made two secret phone calls, both to his Chinese counterpart, Gen. Li Zuocheng of the People’s Liberation Army. The book alleges that the phone calls took place prior to the 2020 presidential election, on Oct. 30, 2020, and then two days after the Jan. 6 Capitol riot, on Jan. 8, 2021.

The book claims Milley contacted Li after he had reviewed intelligence that suggested Chinese officials believed the United States was planning an attack on China amid military exercises in the South China Sea. The authors of the book also claim Milley contacted Li a second time to reassure him that the U.S. would not make any type of advances or attack China in any form, as Milley promised, “We are 100% steady. Everything’s fine. But democracy can be sloppy sometimes.”

Spokesman for the Joint Chiefs of Staff, Col. Dave Butler is defending allegations of “secret” calls with his Chinese counterpart, saying the conversations are “vital” to “reducing tensions” and “avoiding unintended consequences or conflict,” maintaining that the calls were coordinated with high-level defense officials.

“The Chairman of the Joint Chiefs regularly communicates with Chiefs of Defense across the world, including with China and Russia. These conversations remain vital to improving mutual understanding of U.S. national security interests, reducing tensions, providing clarity and avoiding unintended consequences or conflict,” Milley spokesman Col. Dave Butler said in a statement Wednesday.

Butler said that Milley’s calls “with the Chinese and others in October and January were in keeping with these duties and responsibilities conveying reassurance in order to maintain strategic stability.”

“All calls from the Chairman to his counterparts, including those reported, are staffed, coordinated and communicated with the Department of Defense and the interagency,” Butler said.

“Also in keeping with his responsibilities as senior military advisor to the President and Secretary of Defense, General Milley frequently conducts meetings with uniformed leaders across the Services to ensure all leaders are aware of current issues,” Butler continued. “The meeting regarding nuclear weapons protocols was to remind uniformed leaders in the Pentagon of the long-established and robust procedures in light of media reporting on the subject.”

Butler added: “General Milley continues to act and advise within his authority in the lawful tradition of civilian control of the military and his oath to the Constitution.”

But former acting Defense Secretary Christopher Miller, who led the Pentagon from the period after the 2020 election through Inauguration Day, fired back, saying that he “did not and would not ever authorize” Milley to have “secret” calls with his Chinese counterpart, describing the allegations as a “disgraceful and unprecedented act of insubordination,” and calling on him to resign “immediately.”