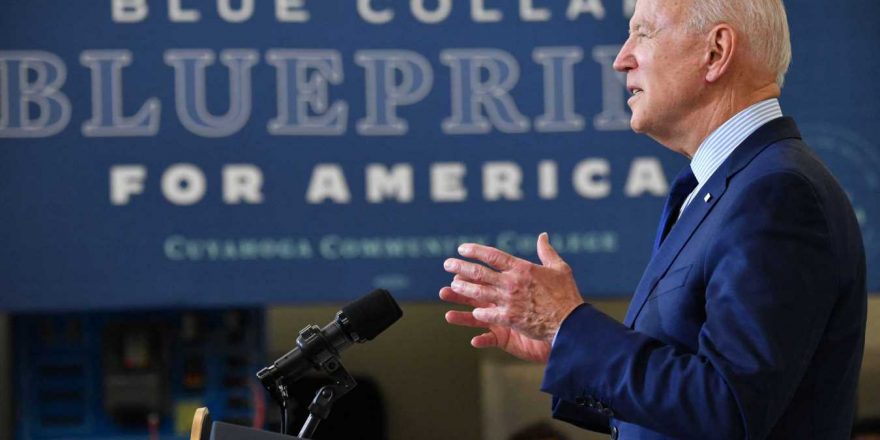 WASHINGTON — After weeks of defending his economic policies against critics who blame them for overheating the economy, President Joe Biden went on the offensive Thursday, arguing that rising wages are a sign his agenda is boosting the fortunes of working Americans.

"The bottom line is this: The Biden economic plan is working," said the president in a speech at Cuyahoga Community College in Cleveland, Ohio. "We've had record job creation, we're seeing record economic growth, we're creating a new paradigm. One that rewards work — the working people in this nation, not just those at the top."

Republicans and business groups claim that the enhanced federal unemployment benefits in Biden's American Rescue Plan, his signature domestic accomplishment, are to blame for a "labor shortage" that has forced corporations like McDonald's and Bank of America to raise their minimum hourly wage.

Biden rejected this view of the economy: "When it comes to the economy we're building, rising wages aren't a bug, they're a feature," he said.

The president on Thursday renewed his call for Congress to raise the federal minimum wage to $15 an hour.

Biden credited the American Rescue Plan and his ambitious vaccination program with jump-starting a U.S. economy battered by the Covid pandemic.

The bill passed with no Republican votes, but several Republicans later sought to take credit for it with their constituents despite having voted against it.

"I'm not going to embarrass anyone, but I have here a list of who, back in their districts, they're bragging about the rescue plan," said Biden, holding up a list of Republicans who touted the relief funding.

"I mean, some people have no shame," he added. "I'm happy they know that it benefited their constituents, that's okay with me. But if you are going to try to take credit for what we've done, don't get in the way of what we still need to do."

As Biden seeks to build support for more than $3 trillion in additional economic stimulus programs, Republican opposition is solidifying.

As the economy improves, conservatives are arguing that Biden's proposed stimulus is no longer necessary.

Private sector wages rose 3% in the first quarter of this year, the fastest pace in at least 25 years, according to economist Mark Zandi. This has made it harder for employers to attract workers willing to work for minimum hourly wages.

"We want to get something economists call full employment, where instead of workers competing with each other for jobs that are scarce, we want employers to compete to attract workers," Biden said.

Biden rejected the growing alarm among some businesses and economists that higher wages and full employment will lead to runaway inflation. Instead, he said, corporations can afford to pay workers more without passing on higher prices to consumers.

"A lot of companies have done extremely well in this crisis, and good for them," he said. "The simple fact is, though, corporate profits are the highest they've been in decades. Workers' pay is at the lowest it's been in 70 years. We have more than ample room to raise worker pay without raising customer prices."

In addition to supporting higher wages, Biden pressed for a corporate tax increase to 28%, revenue he will need to fund his ambitious infrastructure proposal. The American Jobs Plan proposes to spend around $2 trillion over the next decade revitalizing the country's infrastructure and manufacturing sector.

The president also made it clear that he sees these tax hikes as more than just a necessary evil to fund his big plans: They're a key part of reestablishing a sense of shared responsibility and shared burden across the American economy.

"We have a chance to seize the economic momentum of the first months of my administration, not just to build back, but to build back better," he said. "And this time we're going to deal everyone in."