Education Secretary Betsy DeVos hit the road this week for what her department calls a “2019 Back-to-School tour.” Her itinerary includes a school that bans transgender students and staff.

DeVos on Thursday is scheduled to visit Harrisburg Catholic Elementary School in Pennsylvania, part of the Roman Catholic Diocese of Harrisburg. The diocese has a specific policy for students and staff who may be experiencing “gender identity questions,” applicable in situations where a person wants to “chemically and/or surgically alter” their biological sex.

“This is understood in Catholic moral terms as self-mutilation and therefore immoral. To attempt to make accommodations for such persons would be to cooperate in the immoral action,” says the policy, posted on the diocese website.

The policy says students will be unable to enroll or continue to attend diocese schools if they undergo or have undergone such a procedure. The policy similarly applies to staff.

The diocese also forbids its schools from employing any individual “who promotes, procures, assists, or performs an abortion.”

The diocese did not immediately respond to questions about the policy. 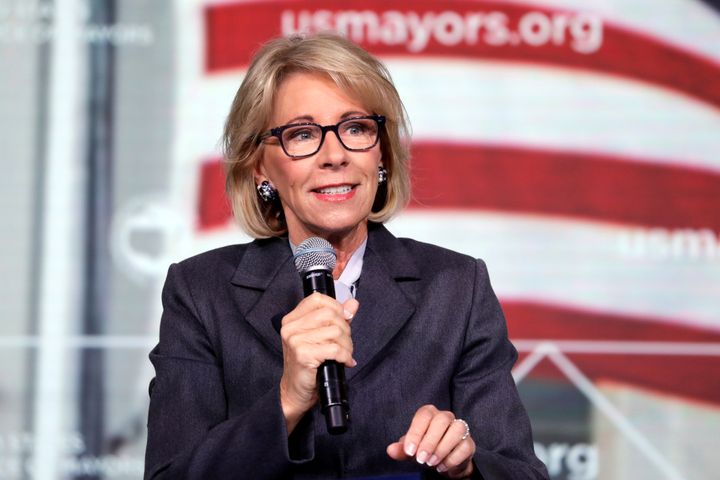 Harrisburg Catholic Elementary School will host DeVos for a roundtable discussion promoting the expansion of a Pennsylvania tax-credit program that provides low and middle-income families with publicly funded scholarships to attend private schools.

DeVos has championed programs that help funnel public dollars to private schools in the form of vouchers or tax-credits. She has been dogged by questions about whether taxpayer funds should be going to schools that actively discriminate against LGBTQ students.

A previous HuffPost investigation found that at least 14% of religious schools that participate in state voucher or tax-credit programs have policies that explicitly target LGBTQ students and staff.

Over half of U.S. states have a private school choice program. However, as secretary of education, DeVos has made it a mission to create a federal program.

During congressional testimony in March 2018, under questioning from Rep. Katherine Clark (D-Mass.), DeVos conceded that private schools that discriminate against LGBTQ students should not be eligible for federal dollars.

The Pennsylvania Educational Improvement Tax Credit, or EITC, gives businesses tax credits if they donate to a scholarship-granting organization that helps families afford private schools. During the 2017-18 school year, over 37,000 scholarships were awarded to families in Pennsylvania through the program. Diocese schools are among those benefitting.

DeVos’ Thursday roundtable is billed as a discussion of the program. She is to be joined by the speaker of the Pennsylvania House of Representatives and Harrisburg diocese officials.

“The secretary’s visit is focused on the legislature’s efforts to expand the EITC-funded scholarship program,” Elizabeth Hill, a DeVos spokesperson, said in an email. DeVos “was disappointed” that Pennsylvania Gov. Tom Wolf (D) vetoed Republican-passed legislation that would have expanded the program, she added.

“More than 50,000 kids who wanted access to the state’s scholarship program were turned away due to lack of funding last school year alone,” Hill said.

Hill did not respond to a question about the Harrisburg diocese policy regarding LGBTQ students and staff.