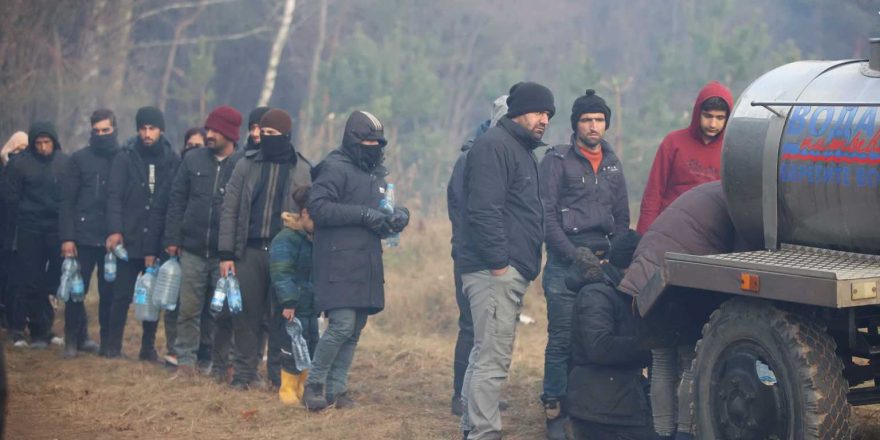 European foreign ministers met in Brussels on Monday to discuss possible sanctions against Belarus as the humanitarian crisis at its border deepens.

Thousands of migrants, many from Syria, Yemen and Iraq, have been gathered at the border with EU member Poland in freezing temperatures for several weeks. Belarus has been accused of allowing the crisis to escalate in a bid to undermine EU security and in retaliation to the bloc's backing of the country's opposition, an allegation Minsk strenuously denies.

Belarus' foreign ministry on Monday dismissed suggestions that it had engineered the migrant crisis as "absurd," claiming that border controls had been strengthened and state-owned airline Belavia was not carrying illegal migrants, according to Russian news agency RIA.

Polish Prime Minister Mateusz Morawiecki on Sunday called on NATO to take "concrete steps" to mitigate the crisis, after dozens of migrants broke through border defenses to enter Poland over the weekend.

Morawiecki indicated that Poland, Latvia and Lithuania, all of which share borders with Belarus, could seek consultations under article 4 of the NATO charter, a measure available when a NATO member believes its "territorial integrity, political independence or security" is under threat.

Last week, in light of speculation about a fresh round of EU sanctions against Belarus, Belarusian President Alexander Lukashenko threatened to choke off a key gas supply from Russia to Europe.

Meanwhile, Lukashenko was quoted in a state media report Monday as saying that Belarus was trying and failing to convince migrants to go home.

Sanctions began to be imposed in October 2020 following what the EU called the "fraudulent nature" of the August 2020 Belarusian election, and subsequent violent repression of protesters, opposition members and journalists.

"If you look at Lukashenko's actions right now, they are a cry for help, if you will. He is trying to get the EU to stop imposing sanctions — he is really blackmailing them — including the recent threat to cut off gas," Rosenberg said.

Signum expects that the next round of sanctions will primarily focus on Lukashenko and his inner circle, in the form of more travel bans and asset freezes. However, Rosenberg said rumored measures against the airlines accused of helping to facilitate mass migrant arrivals in Minsk were unlikely at this stage.

These airlines include Belarus's Belavia, Turkish Airlines and Russia's Aeroflot, and Rosenberg noted that sanctions against such entities are rather complex.

"What has happened instead is that the EU is on a charm offensive, if you will. They are traveling to different capitals, they are talking to those international airlines, and we have already heard about announcements that these airlines are reducing air traffic to Belarus," she added.

Though concerns have been raised that the presence of NATO troops could increase around the Polish, Latvian and Lithuanian borders in light of the weekend's breach, Rosenberg argued that the information coming from the Polish government had to be taken "with a pinch of salt."

"It is very likely that that flow of migrants is eventually going to dry out, because we are already hearing from airlines and local governments that they are taking steps to reduce the inflow of new migrants into Belarus," she said.

"EU forces are not allowed to investigate the situation over there and the Polish government is benefiting from a rallying cry against the migrant threat for domestic political purposes."

Although the humanitarian crisis was evident, she suggested that an escalation of military presence was not imminent.