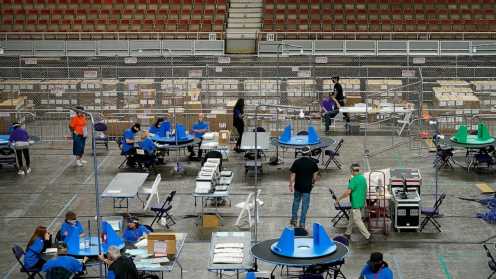 PHOENIX — Firms hired to run a partisan audit of the 2020 election for Senate Republicans in Arizona said Tuesday that data was not destroyed, reversing earlier allegations that election officials in the state’s most populated county eliminated evidence.

The claim of deleted databases was amplified by former President Donald Trump and his supporters, who believe conspiracy theories about election irregularities.

Ben Cotton, founder of a computer forensics firm working on the audit, told key senators that he had recovered all data. The revelation came a day after Maricopa County officials released a scathing letter saying the auditors couldn’t find the data because they didn’t know where to look.

“I have the information I need from the recovery efforts of the data,” said Cotton, founder of CyFIR LLC.

He spoke at a livestreamed hearing called by Republican Senate President Karen Fann to demand answers from county officials about the allegation of deleted data and improper documentation of ballot storage.

The GOP-controlled county Board of Supervisors refused to show up, instead holding a blistering meeting of their own Monday to refute the allegations. They called the audit a “sham” and said Fann’s auditors are incompetent.

After Trump complained without evidence that his loss in Arizona was marred by fraud, Fann used the Senate’s subpoena power to take control of 2.1 million ballots, counting machines and hard drives full of data from Maricopa County, which includes the Phoenix area. She hired Cyber Ninjas, a firm led by a Trump supporter who has promoted conspiracy theories about the election, CyFIR and other firms to review the ballots and data.

The ballot count is on hold this week while the aging arena where it’s taking place is used for high school graduations.

At the Senate’s hourlong meeting Tuesday, Fann and Judiciary Committee Chairman Warren Petersen, also a Republican, asked friendly questions of Cotton, Cyber Ninjas founder Doug Logan and Ken Bennett, a former Republican secretary of state serving as the Senate’s audit liaison. The meeting was broadcast online but was not open to the press or public. Neither senators nor auditors answered questions from the media.

County officials have refused the Senate’s demand to provide administrative passwords to vote-counting machines and internet routers, saying the county doesn’t have the passwords and releasing the routers would compromise sensitive data.

The hearing did not shed light on a central question of the audit: who’s paying. The Senate has agreed to pay Cyber Ninjas $150,000, but Logan has acknowledged that’s not enough to cover his costs. He has refused to say how much the audit is costing or who is contributing. At least two fundraisers, one organized by a pro-Trump cable network and the other by a prominent Trump donor, have claimed to have raised hundreds of thousands of dollars.

While many Trump supporters hope the audit will turn up evidence that he was the rightful winner of the 2020 election, Fann said she’s not looking to overturn or decertify the election results. Rather, she wants to identify ways to improve election procedures in the future, which has prompted fears among Democrats that the GOP will push for legislation that suppresses Democratic votes.

Petersen, the Judiciary Committee chairman, said the Maricopa County audit will be a model for lawmakers in the future.

“When the next forensic audit is done, it will be a completely smooth process from start to finish,” Petersen said.