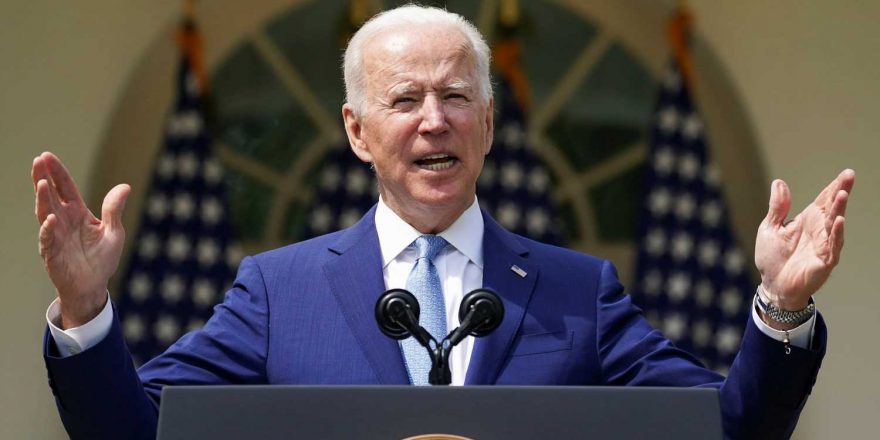 Americans broadly back the big-ticket spending proposals that have defined President Joe Biden's first 100 days in office, a variety of recent polls show.

Surveys show many more Americans approve than disapprove of the $1.9 trillion coronavirus relief bill Biden signed into law in March — by far his most significant legislative victory to date.

As he turns the page on his first 100 days on Thursday, Biden is gearing up to unveil yet another massive spending package, this one aimed at addressing family-related issues.

The White House has shared few details about that plan — but at least one poll shows a sizable majority of Americans already support it.

Since taking over from former President Donald Trump in the midst of the pandemic, Biden has vowed to pursue swift and ambitious actions to lift the U.S. out of the health crisis and overhaul the damaged economy.

Despite Republicans' efforts to brand the spending proposals as debt-ballooning boondoggles and harmful tax hikes, Biden's bid so far appears to be paying off. The president's overall approval rating is above water at 53%, buoyed by Americans' support for his handling of Covid and the economy, according to NBC News' latest poll.

But Biden's multipronged, multitrillion-dollar spending push is still in its infancy. The $1,400 stimulus checks that many Americans received as part of last month's Covid bill are still being sent out. Key lawmakers are calling for a narrower infrastructure proposal, and others have already balked at the possible tax hikes in the yet-to-be-revealed families plan.

"Amorphous spending proposals that promise a lot to people often get a lot of support," said Steve Ellis, president of the nonpartisan budget watchdog Taxpayers for Common Sense.

Recent polls from NBC, Reuters/Ipsos, CNBC and The Washington Post-ABC News consistently show Biden receiving his highest marks for his handling of the pandemic.

The president's Covid response won 69% approval in NBC's national survey, compared with 27% who disapprove. That poll, conducted from April 17 to April 20 among 1,000 U.S. adults, has a margin of error of plus-or-minus 3.1 percentage points.

The latest from Reuters/Ipsos, published Tuesday, had similar findings: 65% approve of Biden's job on the pandemic, while 29% disapprove. The national opinion poll surveyed 4,423 adults from April 12 to April 16. It has a credibility interval — described as a measure of the poll's precision — of 2 percentage points for the full sample, Reuters said.

Polls show Americans still see the coronavirus as one of the most pressing issues facing the country. They also are more likely to look to the government for solutions, according to NBC's latest: Fifty-five percent of respondents said the government should do more to solve problems and help meet the peoples' needs, versus 41% who said it's doing too much.

Biden stressed from the start that his administration's ability to fight Covid depended on the passage of the $1.9 trillion stimulus bill, dubbed the American Rescue Plan. "Absent additional government assistance, the economic and public health crises could worsen in the months ahead," the White House said on the day Biden was inaugurated.

The legislation included several sweeping spending measures, including sending direct payments of $1,400 to most U.S. adults, $350 billion in aid to state and local governments and an extension of federal unemployment benefits.

Since Biden took office, the U.S. has significantly ramped up vaccine distribution and vaccination rates.

Asked in the Post-ABC poll about the stimulus package itself, 65% of respondents said they supported it, versus 31% who opposed it. The survey was based on phone interviews with a random national sample of 1,007 adults conducted from April 18 to April 21. It has a margin of error of plus-or-minus 3.5 percentage points.

In NBC's poll, 46% of respondents said the Covid package is a good idea, a plurality that far outweighs the 25% who called it a bad idea and the 26% who had no opinion.

Biden's infrastructure proposal, which in its initial form comes with a price tag of more than $2 trillion, is also popular among Americans, polls show.

The package would fund a range of projects that go far beyond merely repairing roads, bridges, ports and other structures that some refer to as "traditional" transportation infrastructure. The White House frames the plan as a forward-looking investment that will address climate change, the rise of China, racial injustice and more.

A Monmouth University poll published Monday found that nearly two-thirds of respondents back the plan, as well as the idea of paying for it, in part, by hiking the corporate tax rate to 28% from 21%.

Nearly half of those polled by Monmouth said the federal government isn't spending enough on transportation infrastructure, 49%, compared with 23% who said the government is spending the right amount and 14% who said it's spending too much.

Monmouth's poll was conducted by phone from April 8 to April 12 with 800 U.S. adults, and the results carry a margin of error of plus-or-minus 3.5 percentage points.

CNBC's latest All-America Survey, which polled 802 adults nationwide from April 8 to April 11 and has a plus-or-minus 3.5 point margin of error, found that only a slight plurality support the infrastructure plan and the corporate tax increases.

But Americans overwhelmingly support nearly all the details of the plan when presented with them individually, the poll found.

Infrastructure investment is historically popular among both major political parties. But Republicans, and some moderate Democrats, have pushed for Biden to significantly pare back the sweeping package.

A group of GOP senators last week put forward a counteroffer that costs less than one-third of Biden's proposal. Senate Minority Leader Mitch McConnell, R-Ky., has slammed the Biden plan as a "Trojan horse" for a progressive agenda.

But the survey results suggest that at this early stage, the White House's ambitious outline resonates with large chunks of the country.

"The Biden administration's presumption that spending programs are popular is borne out by these poll numbers," Patrick Murray, director of the independent Monmouth University Polling Institute, said in a press release Monday.

"The key to maintaining this level of support is whether Americans can point to direct benefits in their own lives once those plans are put into action."

Ellis told CNBC that at this point "there is not a lot to necessarily attack or go after."

"The devil is going to be in the details on these," Ellis said.

In a joint address to Congress on Wednesday night, Biden is expected to lay out another massive spending plan focused on family issues.

The details are unclear, but Monmouth's survey suggests Americans nevertheless have an appetite for more government spending.

The proposal will reportedly focus on expanding child care, paid leave, universal pre-K education and other priorities and will cost roughly $1.5 trillion, NBC reported, citing sources familiar with the discussions.

Reports also say Biden may seek to fund the plan by raising taxes on millionaire investors, pushing the tax on capital gains to 39.6% from 20% for those Americans earning more than $1 million.

Monmouth's survey asked: "Biden is also expected to propose a large spending plan to expand access to healthcare and childcare, and provide paid leave and college tuition support. In general, would you support or oppose this plan?"

Sixty-four percent of respondents said they supported it, while 34% opposed it and just 2% said they did not know.

Multitrillion-dollar spending plans were not always viewed as political winners, Ellis said. He compared the current moment to the 2008 financial crisis, saying that when leaders were crafting recovery plans then, "there was a recognition that a trillion dollars is a threshold that we don't want to cross."

But the Covid packages, first passed last year by Trump, "blew that away," Ellis said.

"Once you cross that threshold, it becomes normalized," he said. "Most people have no sense of a trillion anything, much less a trillion dollars."