NEW YORK — Over 900 employees of the New York Police Department have tested positive for the coronavirus and thousands more have called out sick, the department announced Monday.

In a statement, the department said that 824 uniformed police officers and 106 nonuniformed employees have tested positive for the virus. That’s a total of 930 NYPD employees who have been infected, a 620% rise from one week ago.

Meanwhile 5,199 uniformed cops, or 14.4% of the entire force, were out sick on Monday. That’s double the number of sick cops from last Monday.

NYPD Commissioner Dermot Shea, in an internal memo sent to the police force earlier this month, said officers would be vulnerable to catching the virus due to the nature of the job, which includes frequent interactions with the public. Officers, Shea said, would “without a doubt, suffer.”

The nonprofit New York Police Foundation announced Tuesday it had purchased 150,000 units each of masks, gloves and packets of hand sanitizer for city cops. 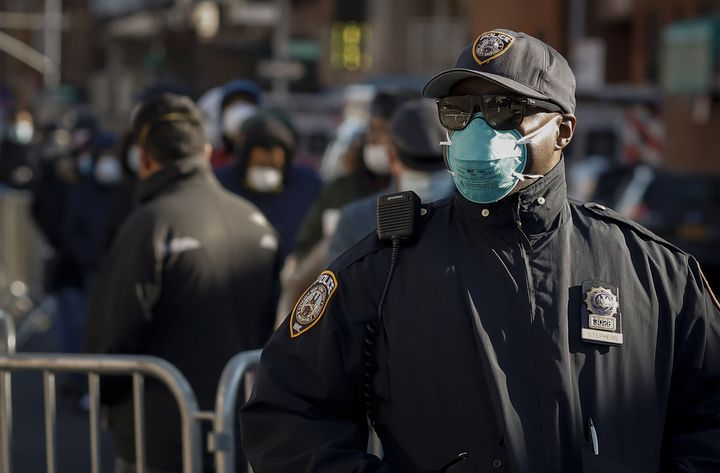 The rapid spread of the virus among the country’s largest police force highlights the dire situation in New York City, which currently has over 38,000 confirmed cases of the coronavirus — nearly 5% of all the cases in the world — including 914 deaths.

Much of the city has been shut down to slow the spread of the virus and to prevent hospitals from being further overrun with patients. On Monday, Mayor Bill de Blasio announced that cops would start issuing fines to people who aren’t social distancing — the Centers for Disease Control and Prevention-recommended policy of maintaining 6 feet of space from other people.

De Blasio emphasized that cops should issue fines, which could be as high as $500, only after giving those congregating in groups repeated warnings to disperse.

In its press statement Monday, the NYPD said it was conducting citywide patrols to enforce social distancing.

The department claimed no arrests or summonses occurred as a result of these patrols.

Meanwhile, the virus is also spreading fast among those the NYPD has arrested and put in jail, a population that is disproportionately Black and brown, a result of years of racist policing in the city.

Nearly 140 inmates and 114 correction officers have tested positive for the coronavirus, with some 800 other inmates in quarantine throughout the city’s jail system.

One inmate incarcerated at Rikers Island recently told HuffPost he had developed symptoms of the coronavirus after being made to sleep a few feet away from sick inmates.

“They give us nothing to protect us,” he said of the Rikers Island guards. “I just feel like I’m sitting on death row, waiting to die.”