In a rustic wood barn well-lit for television and with his blue-collared chambray shirt rolled up to the elbows, billionaire liberal activist Tom Steyer spoke straight to camera, decrying fat cats’ clout on the structures of power as he announced his 2020 presidential bid.

“I think people believe that the corporations have bought the democracy, that the politicians don’t care about or respect them.” Steyer narrates in the campaign video which includes a montage: of a veritable who’s-who of infamous faces – Bernie Madoff, Donald Trump Jr. and Sr. – all depicted as moneyed villains deployed as a foil for his staunch stance against corporate corruption. Figures who put a face on the forces Steyer said he’s running to defeat.

Within hours of launching his campaign, his progressive competitors had already pounced – criticizing Steyer for his own fortune – and the $100 million of his money he’s committed to putting in for his campaign. Massachusetts Sen. Elizabeth Warren tweeted and used his announcement as a springboard for her own fundraising saying candidates need to be able to do more than just write “big checks.” Vermont Sen. Bernie Sanders told MSNBC that he is “tired of seeing billionaires trying to buy political power.” 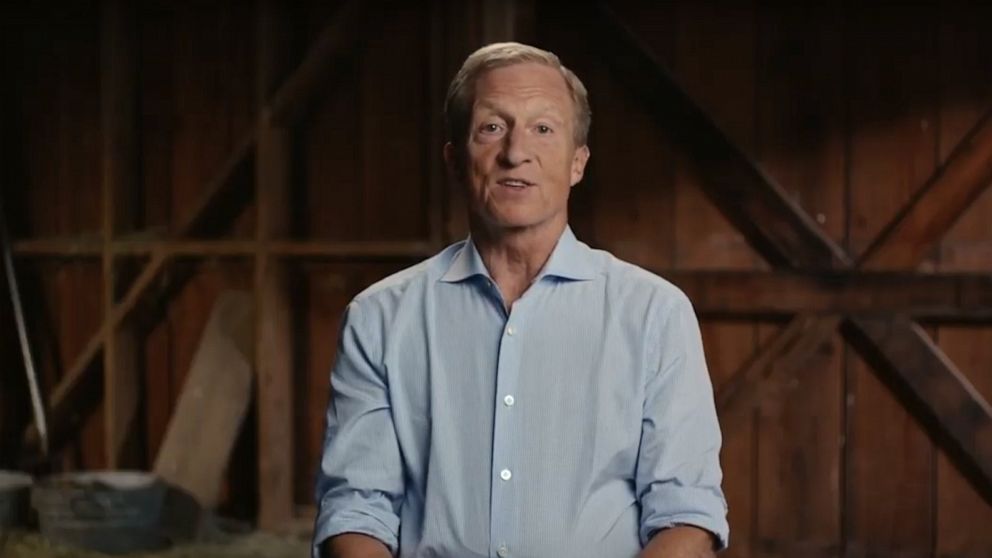 Money talks – it always has; and in this 2020 presidential race – it also runs.

And it’s also become a deployable talking point for candidates making the grassroots pitch to wield against high dollar Goliaths – Steyer facing off against corporate greed; progressive candidates shaking fists at the billionaire’s wallet. But, political experts say that dramatic foil could flip: for even as Warren and Sanders oppose ‘millionaires and billionaires’ – they, too, are in the 1%, each with a gross income well over $1 million in recent years.

“They’re attacking the billionaire – he’s an easy target – but the reality is that’s how you influence politics right now,” Dana R. Fisher, a professor of sociology at the University of Maryland focusing on the nexus of democracy, politics and environment. “But they’re still one percenters – and for most Americans the difference between their million and his billion is a distinction without a difference – it’s just a couple more zeroes. And – we have seen people with money do good things.”

In the crowded Democratic field, the wealth spreads wide. Behind Steyer, at least three are millionaires: Harris, Warren and Sanders.

Harris reported the highest 2018 gross income at $1.89 million. Her husband, an attorney whom she married in 2014, earned most of their income. For 2018, Harris reported just over $157,000 in Senate salary and $320,125 in profits from the book she authored ahead of her campaign announcement.

Sanders, famous for his push against the unjust power of the richest 1%, reported an adjusted gross income of $1.06 million in 2016 and $1.13 million in 2017 – his bestselling 2016 book “Our Revolution” bumping his income in those years by more than four times the year earlier.

Warren, who’s also made anti-corruption a key focus of her campaign, is also part of the 1%, the documents show. Her adjusted gross income in 2018, after filing jointly with her husband, exceeded $846,000. Between 2013 and 2015, her adjusted gross income was over $1 million and neared $1.55 million in 2014 after her first book was released. 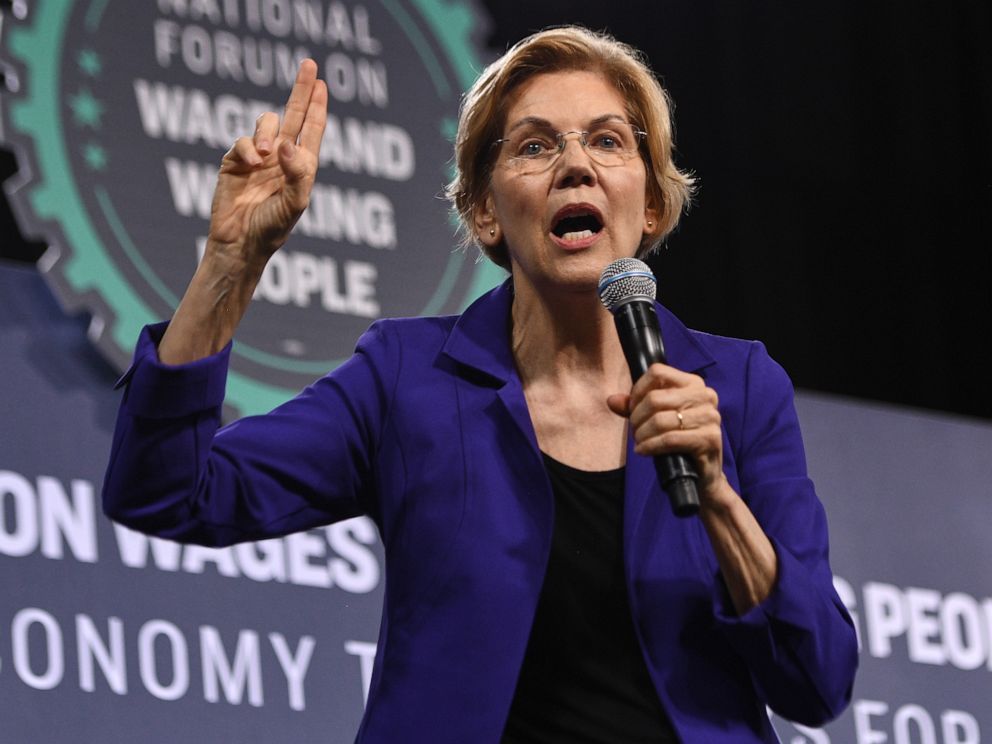 The abundance of wealthy presidential hopefuls – even as the Democratic field coalesces around the idea of keeping money out of politics – raises questions about whether membership in the exclusive one-percenters’ club preclude candidates from championing the 99%?

“I think it is a bit of a high wire act,” Sheila Krumholz, executive director of the Center for Responsive Politics tells ABC News. “Bernie Sanders and others like Warren have been consistent with their message – hammering the system where big dollar donors have been able to shape things. But it remains to be seen how effective they will be since there is a lot more made about their own access to resources – but they’re hoping to make hay with this message – and hoping to make money off criticizing money like Steyer’s.”

Some of the most affluent among the 2020 Democratic field have also led the fight against such money eclipsing the middle class – or choking marginalized groups.

Harris and Warren have joined fellow candidates rallying at union workers’ forums, promising that should they take the White House, workers in every state will earn no less than $15 an hour. Sanders often reminds voters that he has been “out on the picket line, standing with workers my entire life” and has brought the ‘fight for 15′ to numerous strikes, even a Walmart shareholders’ meeting. 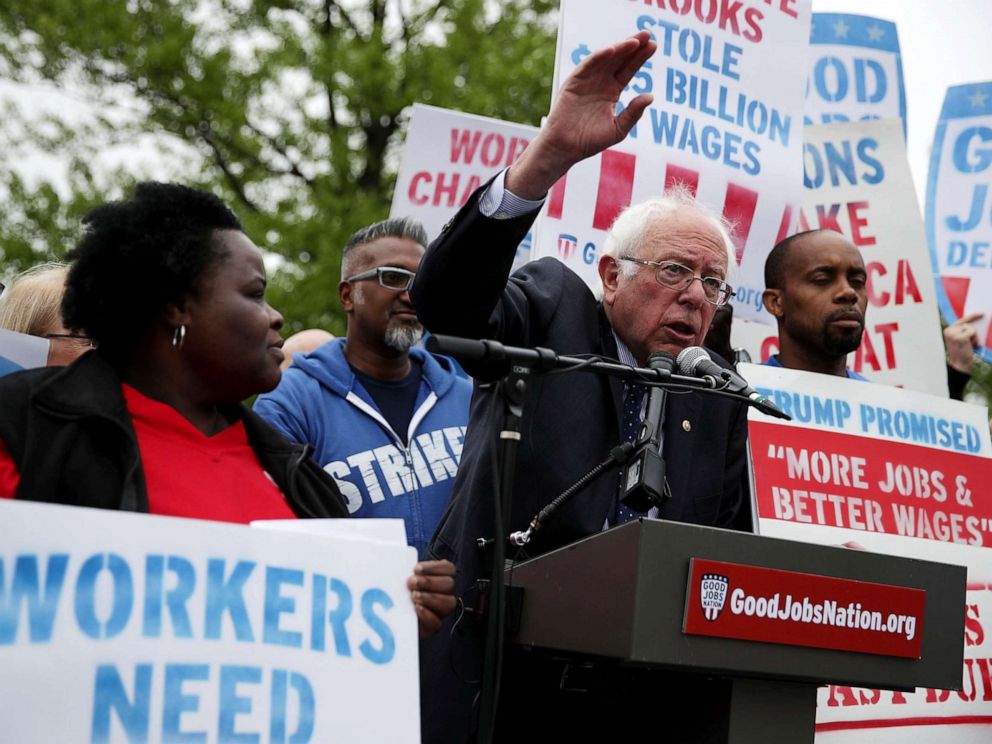 On the heels of Steyer’s announcement, Sanders also penned an op-ed linking disparities in wealth to greater divides in the nation.

“The unfortunate truth is that politicians who take checks from millionaires and billionaires owe their corporate constituents first, and everyday Americans last. The black-white wealth gap could be closed by targeting the extreme wealth at the very top. Instead, politicians beholden to the one percent ask the black middle class and the white middle class to fight over scraps.”

Steyer now seeks to ‘push power down’ to the people – as he underscored during an interview with CBS after he announced his 2020 run.

“The biggest question facing the United States is not what we should do. But how are we going to break the corrupt stranglehold that corporations have on our government?” Steyer said of why he’s running. “And how are we actually going to get done things that the American people want? How are we going to return power to the American people? That is the question in front of us today, and I didn’t feel it was being addressed.”

On the other side of the aisle, President Donald Trump – like Steyer a wealthy outsider businessman running on populist appeal – has made the case that bringing back jobs in the manufacturing and coal sectors as well as focusing on “America First” trade policies will lift the middle class.

There’s never been a shortfall when it comes to counting the well-heeled class’ involvement in politics: running for office is an expensive game, political experts point out.

“Billionaires are always a part of the political sphere and race for the white house – whether they’re running for office,” Krumholz says. “Being rich doesn’t preclude you from advocating for the people – and it can be immensely helpful – at the same time – money is essential, but not sufficient.”

The trend this cycle, though, is that those extra zeroes are the problem in politics – and that the small dollars and cents donated by millions of people instead – are greater than the sum of their parts, Krumholz said.

“Everyone wants to claim the mantle of the ‘chosen’ candidate with small donors giving humble amounts,” Krumholz said. “But rejecting PAC money is so de rigueur now that you’re actually standing out more now if you don’t do that. So there’s less to be gained by taking PAC money than not – so as not to stand out as the less pure candidate.”

As the brimming Democratic field thins, and the primary gives way to the main stage – that may change.

“Then the candidate is longer having to do so much virtue signaling in order to distinguish themselves from the pack – and less need to be so ideologically pure,” she said. “I expect there will be more acceptance of more kinds of donor interests stepping in – once the nominee is elected – and the fight is against President Trump.”