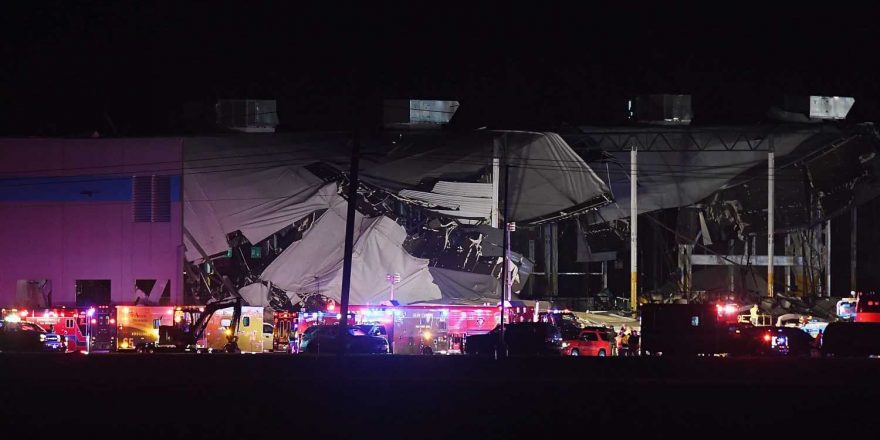 A reported tornado ripped through an Arkansas nursing home Friday night, killing one person and injuring several others, and emergency crews in southern Illinois were responding to reports of workers trapped inside an Amazon warehouse after a roof collapsed from storm damage.

At least one fatality was also reported in Missouri as severe storms, some believed to be tornadoes, swept across the Midwest and parts of the South.

Craighead County Judge Marvin Day told The Associated Press that a tornado struck the Monette Manor nursing home in Arkansas at about 8:15 p.m., killing one person and trapping 20 people inside as the building collapsed. Officials had earlier reported at least two fatalities.

Within two hours, the building had been cleared and everyone initially believed to have been inside had been accounted for, Day said.

"It looks like it's pretty much destroyed," Day said of the building. "… It happens quick but apparently there was a little bit of time with tornado sirens going off." Some residents were found in the basement "and were prepared for this," he said.

Five people had serious injuries, and a few others had minor ones, he said. The nursing home has 86 beds.

Day said another nursing home about 20 miles away in Truman was badly damaged but no injuries were reported. The residents were being evacuated because the building is unsafe.

Footage from St. Louis TV stations showed dozens of emergency vehicles at the Amazon center near Edwardsville, Illinois, about 25 miles west of St. Louis. It wasn't immediately clear if or how many people were hurt, but the Collinsville, Illinois, Emergency Management Agency on Facebook called it a "mass casualty incident." One official told KTVI-TV that up to 100 people were believed to be in the building, working the night shift, at the time of the collapse.

Television news footage from the scene showed buses taking people away from the building, and at least one person was seen being carried to a medical helicopter on a gurney.

The Belleville News-Democrat reported that the Amazon fulfillment center in Edwardsville opened with two warehouses in 2016, with 1.5 million square feet of space. The warehouses are used to store items until they are shipped to mail-order customers.

A photo in the St. Louis Post-Dispatch showed a large portion of the wall and roof of the massive Amazon warehouse completely collapsed.

It wasn't immediately clear if the damage to the Amazon warehouse was caused by straight-line storms or a tornado, but a large tornado was reported in the Edwardsville area at about the time the building was damaged. The National Weather Service office near St. Louis issued reports of "radar-confirmed tornadoes" in the Edwardsville area.

In fact, workers at the weather service office themselves had to take shelter as another tornado passed near their office in Weldon Spring, Missouri, about 30 miles west of St. Louis. That twister was suspected of destroying several homes in the Missouri towns of New Melle and Defiance, leaving at least three people injured, one of them hospitalized with serious injuries. Rescue crews worked into the night sifting through damage to make sure there were not additional injuries.

The collapse came as a strong thunderstorm, and possibly a tornado, ripped through the St. Louis area. Winds of up to 70 mph were reported in parts of St. Charles and St. Louis counties in Missouri.

In rural St. Charles County, Missouri, one person died and two others were injured when buildings collapsed near the town of Defiance. The National Weather Service office in suburban St. Louis confirmed the death, but no further information was immediately available.

"The safety and well-being of our employees and partners is our top priority right now," Amazon spokesperson Richard Rocha said in a written statement Friday night. "We're assessing the situation and will share additional information when it's available."

Illinois Gov. J.B. Pritzker said on Twitter that Illinois State Police and disaster officials were coordinating with local officials in Edwardsville, and he was monitoring the situation.

"My prayers are with the people of Edwardsville tonight, and I've reached out to the mayor to provide any needed state resources," Pritzker said.

The storms in Illinois and Arkansas were among several places in the Midwest that reported tornadoes spotted or on the ground.

The storms caused additional damage as they tracked through Tennessee and into Kentucky. Several buildings collapsed in the southwestern Kentucky community of Mayfield, said Sarah Burgess, a trooper with the Kentucky State Police in Mayfield.

Burgess said authorities worked to clear trees and power lines from roads in order to begin assessing damage. She said several people were trapped inside a damaged candle factory in Mayfield.

Photos posted to social media from Mayfield showed uprooted trees, a courthouse steeple sheered off and business windows blown out in the storms.

Kentucky Gov. Andy Beshear declared a state of emergency early Friday for what he said was major tornado damage in several western counties. Beshear said the National Guard has been summoned to respond to the region.