Up until now, bitcoin has largely been behaving as an uncorrelated asset. This got a lot of people excited, categorizing bitcoin as a future digital gold or a safe haven asset. The worst thing about this recent dip in price ($5,873, GDAX) was not the decrease in the price itself. Much more daunting for bitcoin, was that the price dip coincided with the dip of the US stock market.

Bitcoin and the Bear Market

This chart shows the Dow Jones Industrial Average overlaying the bitcoin price (red line). A large part of bitcoin’s value proposition to institutional investors is that bitcoin potentially carries low or negative beta. That’s finance speak for an asset having low or an inverse correlation with the market as a whole (e.g. the S&P 500).

Asset managers like assets with low or negative beta. Asset managers’ performance is constantly being measured against the stock market indices. If the assets they manage are correlated, it’s hard for them to outperform the market. That’s why it’s very important for bitcoin to not dip when the stock market does. But it did.

In December, I wrote the following:

Now let’s plot the beta (in purple) for the time period before and after bitcoin futures trading began on the CME & Cboe.

Looking at the graph, beta increased significantly in December, surpassing 2 in February. As a comparison, let’s look at the beta of gold, which rarely ever goes above +0.15.

Is it then safe to say that institutional investors are the reason why bitcoin dipped this week? As compelling as this theory sounds, analysis shows that this is most likely not true. The volumes of CME & Cboe are still too insignificant to move the price of bitcoin. Bitcoin is still an asset mostly held by retail investors.

I would argue that it is much too soon to make conclusions from the data at this point. Focusing on this previous week in particular, we can see that bitcoin had already been crashing for quite some time before the stock market correction occurred, and their dips coinciding could be entirely coincidental.

However, it is still a worrying development, and even if institutional investors probably are not responsible for this, there’s still been a change in demographics of the retail investors. Historically, bitcoin has been an asset mainly held by geeks interested in the technology, with little interest in the stock market. Currently, mainstream investors who speculate on the stock market might also speculate in crypto. When their stocks crash, they may sell the decentralized currency to offset their losses, or to buy the dip of the stocks they understand better and have a firmer belief in.

A second thing that gives a bearish outlook on bitcoin is that the premium of the Bitmex June futures XBTM18 disappeared completely this week. Ever since they were listed, they had been trading at a premium of several hundred dollars, indicating a bullish sentiment among traders. The futures contracts are a less liquid instruments on Bitmex primarily compelling for medium/long-term positions as they have no funding fees (as compared to their primary, perpetual instruments). The disappearance of that premium suggests that traders are no longer bullish on bitcoin in the medium term.

I am not bearish on the digital asset in the medium to long term, but I’d like to point out that while we are experiencing a bounce back to $9,000+, that doesn’t mean we’re out of the woods quite yet. Let’s look at a graph from the bear market of 2014: 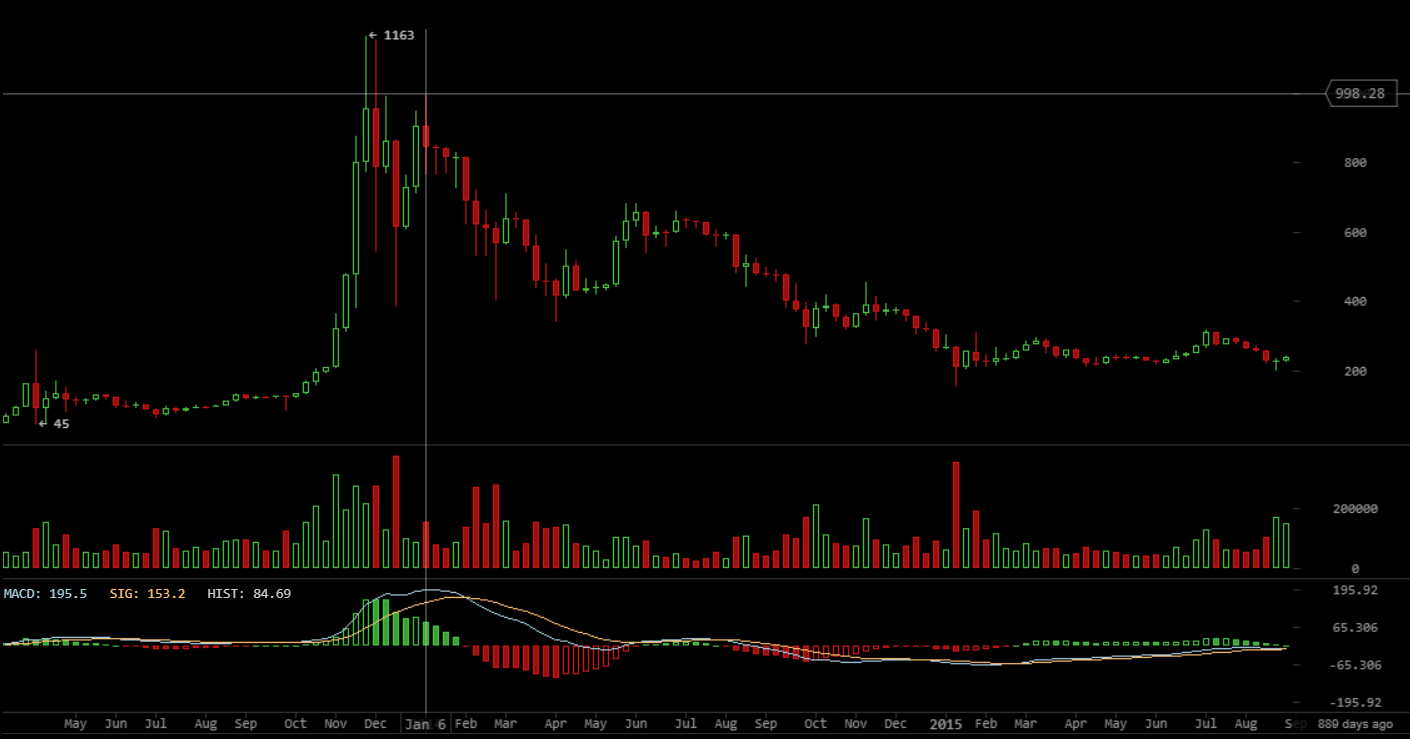 In the weeks after the crash from $1,163, after which the longest bear market in bitcoin history would follow, we still experienced bounces. After dropping to $382, the price rebounded to a whopping $995 before continuing on downwards to $185. In today’s terms, that sort of intermittent bounce would translate into a $17k recovery. Naturally, you can’t compare 2014 and 2018, but this at least goes to show that you shouldn’t interpret post-crash volatility as anything more than just that; volatility.

What are your thoughts on market manipulation? Let us know in the comment section below!

Disclaimer: Bitcoin price articles and markets updates are intended for informational purposes only and should not to be considered as trading advice. Neither Bitcoin.com nor the author is responsible for any losses or gains, as the ultimate decision to conduct a trade is made by the reader. Always remember that only those in possession of the private keys are in control of the “money.”