Home » Markets » Are you a noob? Here’s a lesson in cryptocurrency vocabulary

Are you a noob? Here’s a lesson in cryptocurrency vocabulary 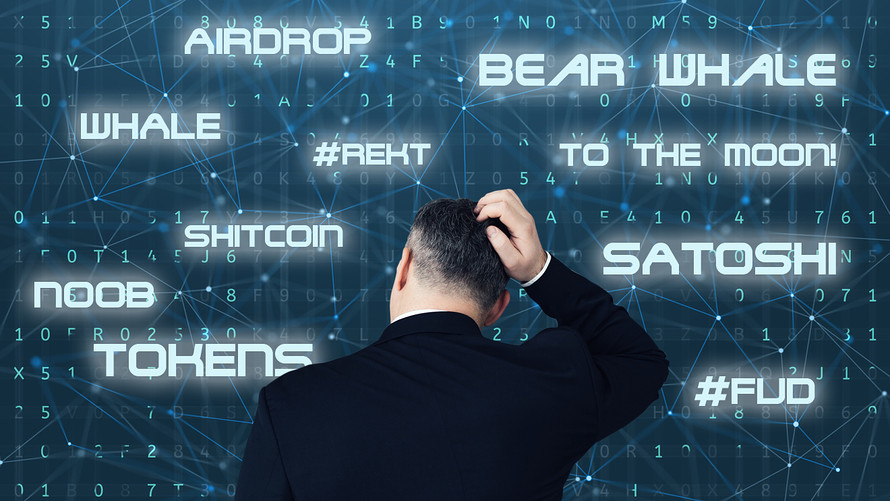 By now, even casual crypto investors have acquired a general understanding of bitcoin and acronyms like ICO (that’s initial coin offering for the still-stumped). But just as important to understanding the enigmatic world of blockchain and cryptocurrencies are far more obscure digital assets less understood by the average noob.

Some of the frequently used terms in the parlance of crypto enthusiasts are novel, while others have been co-opted from the gaming world and traditional Wall Street trading.

Barry Silbert, founder and CEO of Digital Currency Group, has his own favorites.

Here’s a quick primer on basic terms and the more nuanced verbiage that cryptophile’s should familiarize themselves with.

The most well-known name in the crypto world is Satoshi.

Satoshi Nakamoto is the brain(s) behind bitcoin. This publisher of a bitcoin white paper in 2008 is rumored to be a Japanese male in his mid-40s. But throughout the years, many people have claimed to be, or know, Satoshi. Popular theories include U.S. computer scientist Nick Szabo and Australian businessman Craig Steven Wright.

The term HODL was accidentally coined in a 2013 Reddit post where an inebriated user (according to the post) was ranting during a bitcoin selloff, trying to explain why he wasn’t selling and instead was holding, or as mistyped: hodling.

The post was headlined “I AM HODLING” and began “I type d that tyitle twice because I knew it was wrong the first time. Still wrong.”

While it began as a joke, the term is now a staple among the bitcoin community, especially the bulls, who are more likely to HODL than sell.

A bitcoin whale describes a big player in the market. For investors, it is often useful to identify these participants and when they are buying and selling because the size of their flows will more often than not move the market.

According to bitinfocharts there is currently one wallet that has more than 1% of all bitcoins, and the top 10 biggest wallets are home to 5.75% of all coins, which with bitcoin trading just above $9,000, are currently valued at $8.9 billion.

As an extension of Whale, a BearWhale is a big-time investor who is bearish on the price of bitcoin.

Although Milton Friedman said there’s no such thing as a free lunch in financial markets, this isn’t exactly the case in cryptocurrency markets.

From time to time, companies doing an ICO will simply give away some coins, thus “airdrop,” as a marketing strategy to raise awareness and create hype among the crypto community for their offering.

How to get free tokens? These coins appear in a row called “Token Tracker” in a user’s wallet.

A token is issued during an ICO to investors making a financial investment. However, there are two types of tokens that are issued: utility and security.

A company issues a utility token that will give the investor access to a company’s product or service they are offering. These tokens aren’t meant to be a tradable asset and therefore aren’t regulated by any government agency. Purchases of utility tokens are hoping that the value of the token will appreciate over time through price, revenue share or other forms of dividend payments.

On the other hand, a security token is a tradable asset and is subject to some securities regulations.

FUD isn’t a specific term for the cryptocurrency market. However, within the wild world of digital currency it has its own meaning.

FUD is anything that intends to install “fear, uncertainty and doubt” in bitcoin and other digital currencies. Within the deep threads of chat forums and on the Twitter, FUD is often compared with fake news by the bitcoin bulls who see any negative news as an attack on the credibility of their digital assets. As in, “Don’t listen to them, they’re just spreading FUD”

Not surprisingly, owners of bitcoin pop out of their shell at any sign of a price increase. Often outspoken, bitcoin investors like to let everyone know when they are making money.

“To the moon” is a perfect example of the community patting each other on the back. It is used when the price of bitcoin surges and is often referred to as a rallying cry for the bitcoin owners.

Hopefully, after reading this, you won’t have the unfortunate experience of owning a sh*tcoin. The name, which should be fairly self explanatory, refers to a lesser-known coin or alternative coin to bitcoin that has shed nearly all of its value.

Similarly, vaporcoin, or vaporware, refers to a virtual asset that has been surrounded by hype, which has driven up the value of the associated currency but whose protocol doesn’t have a clear use and could be sh*tcoin (see above).

If you are new to the above terms you are a “noob” or a newbie who doesn’t have a comprehensive knowledge of the crazy world of cryptocurrencies.

If nothing else, after reading this primer, you’re no longer a noob.