Today, the retail brokerage industry in Australia is facing the outcome of months of deliberations at the national regulator, the Australian Securities and Investments Commission (ASIC) on the use of its product intervention powers. The regulator published a significant amount of data which it acquired from brokers earlier this year in order to justify the decisions taken over the past several months.

As Finance Magnates reported back in April, the ASIC had mandated brokers to send it an unprecedented amount of data. What the regulator did with the information is to systematise it in a small report which was published together with the product intervention powers decision today and provide us with an exclusive access into the kitchen of the Australian retail brokerage industry. 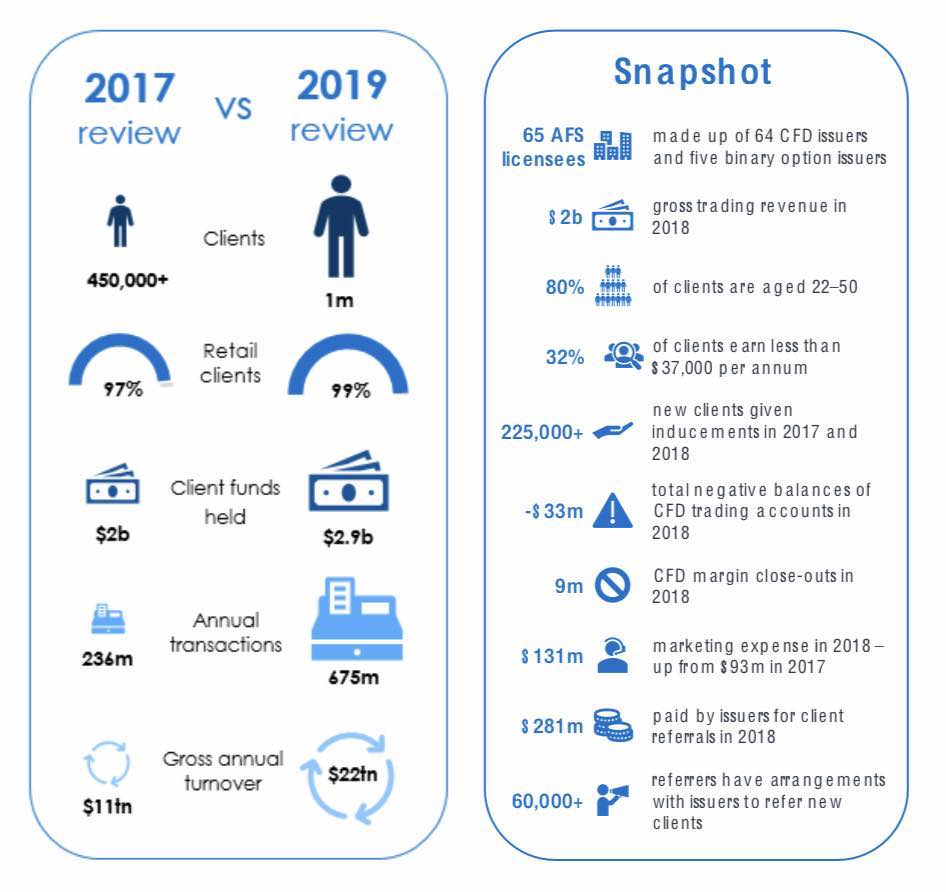 As the screenshot above details, the industry in Australia has grown massively over the past year. This has been largely a result from the significant amount of clients onboarded from outside of Australia, namely Asia.

Before providing you with the data used by the ASIC which prompted it to take product intervention action, let’s take a deeper dive into what the measures are.

The Measures at a Glance

Starting from the harshest measure, similarly to the US and Europe, the Australian financial regulator chose to completely ban binary options. Brokers will still be allowed to offer CFDs, provided that they meet a big list of conditions when offering their products to retail clients.

Leverage restrictions for CFDs in Australia are as follows: 20:1 for forex and gold, 15:1 for stock indices, 10:1 for commodities except gold, 2:1 for cryptocurrencies and 5:1 for shares and all other instruments.

When a client equity falls below 50% of the total initial margin required to maintain the open positions, the broker should trigger a merging closeout of one or more of the customer’s trades.

On another note, negative balance protection in Australia becomes mandatory and brokers are prohibited from providing any form of incentives to traders. The firms will also need to place visible risk warnings and make sure that their trading platforms can display the total position size and overnight funding costs related to open positions in real-time.

ASIC also highlights that brokers will need to publish their pricing methods, disclosing information about their pricing and execution methodology.

The total number of clients swelled to over 1 million in 2019 from just over 450,000 in 2017. While client funds only increased from AU$2 billion to $2.9 billion, the number of annual transactions rose from 236 million to 675 million. The gross annual trading volumes transacted via Australian brokers increased from $11 trillion to $22 trillion.

A snapshot of the industry in the land down under shows that there are 64 CFD brokers and 5 binary options providers. The gross trading revenues was estimated by ASIC at $2 billion with 80% of clients aged between 22 and 50. The average annual income of 32 percent of the customers of Australian brokers was less than $37,000 annually.

Over 225,000 clients have been provided with an incentive of some sort in 2017 and 2018 and a total of $33 million of negative balances incurred by clients after 9 million margin closeouts in 2018.

The ASIC states that Australian brokers spent $131 million on marketing in 2018, a figure which was higher by 40 percent when compared to 2017’s $93 million. Brokers have also paid out $281 million to introducing brokers in 2018. The Australian regulator also states that there are over 60,000 IBs working with local brokers.

How Many are Offshore?

Another notable statistic which the ASIC published this morning is the number of Australian clients which are onboarded from outside of the country. Earlier this year, the ASIC scared off local brokers by informing them that they need to close a number of offshore accounts and specifically singling out China. 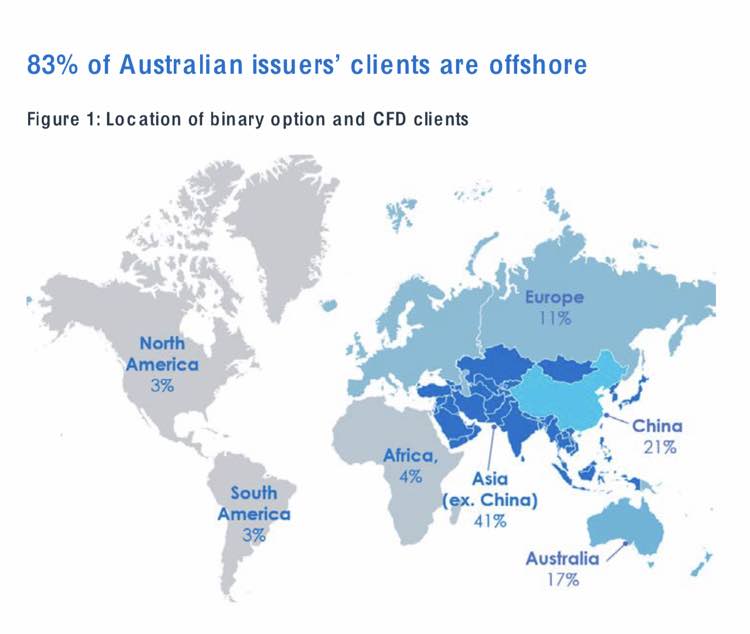 There is no information whether the figures on the graph above by the Australian regulator include the figures before or after ASIC’s advice to brokers. As we can see, 83 percent of all clients of Australian brokers are coming from outside of the country.

An overwhelming majority of offshore customers are hailing from Asia – 62 percent. Out of those, 21 percent are from China and 41 percent are from the rest of the continent. Only 11 percent of clients of Australian brokers are from Europe, a figure which is surprisingly low given ESMA’s restrictions last year. 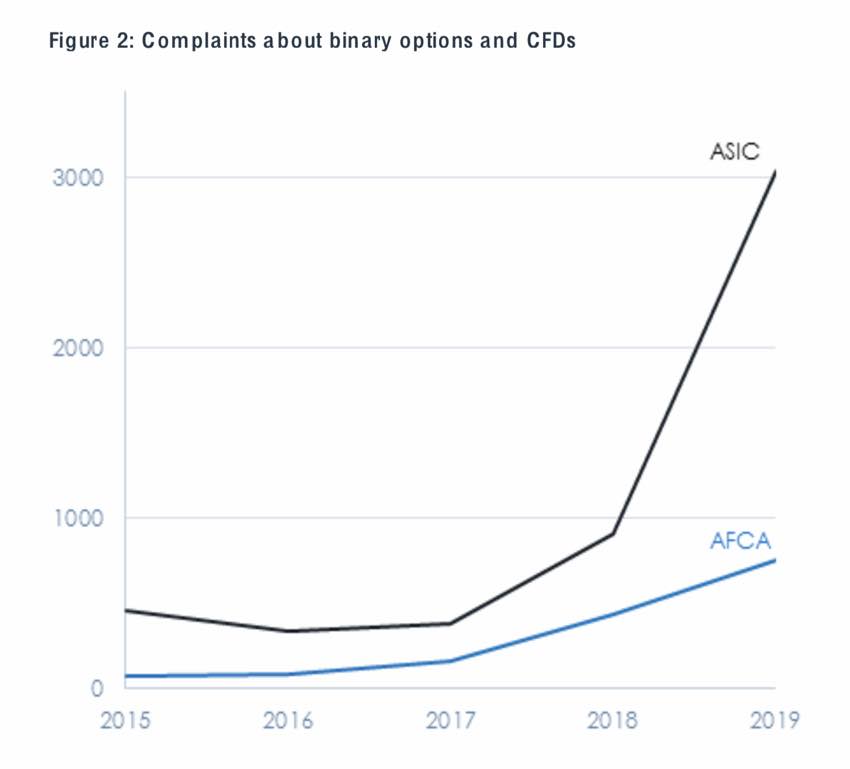 Up until 2017 both ASIC and the Australian Financial Complaints Authority (AFCA) were receiving more or less around 500 complaints per annum. In 2018, the figure tripled to around 1,500 and ballooned to just under 4,000 this year.

The ASIC also published the total number of clients which are losing money when trading different products. The average industry figures are notably better for clients which are trading only FX – 63% of those traders lost money. The money losing percentage for clients trading CFDs stood at 72%, while 80% of binary options traders parted ways with their money.

Brokers Well Prepared, but 20:1 a Surprise

With the industry in Australia largely expecting the changes to the local regulatory framework, local experts shared with Finance Magnates that the 20:1 leverage restriction on all foreign exchange pairs has come as a surprise. The restriction is even more strict than in Europe, where major FX parts can be traded with a gearing of 30:1.

Commenting to Finance Magnates, Paul Derham, Partner at Australian commercial and financial services lawyers firm Holley Nethercote, said that a lot of brokers have been actively divesting their regulatory exposure by opening subsidiaries in offshore jurisdictions. While the industry already seems well prepared, there is still time before the new product intervention measures are applied.

In contrast to the traditionally lengthy process of product intervention in Europe, the ASIC has been proactive in its approach when gunning to use its new powers granted by parliament this spring.

After today’s publication of the consultation paper, the industry has until the 1st of October to respond. The ASIC is expected to introduce the final measures shortly after the responses from the industry are received. Brokers will then have between 20 business days and 3 months to change their CFDs offerings, depending on the technical time necessary for implementations.