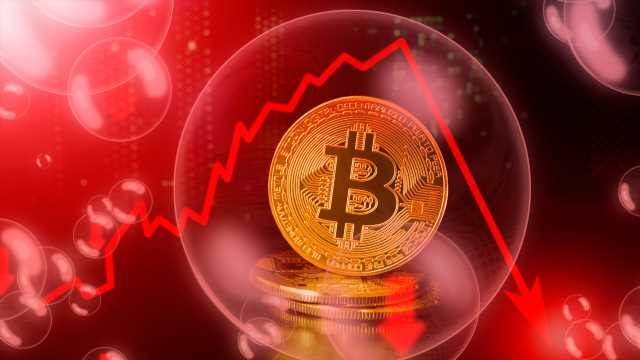 Guggenheim Investments’ global chief investment officer has some advice on what investors should do as the price of bitcoin plummets. His company, with $230 billion in assets under management, has been trying to buy bitcoin for months.

Guggenheim’s Strategist Has Some Bitcoin Advice as Price Falls

Scott Minerd, Guggenheim Investments’ global chief investment officer, has shared his recommendation on bitcoin as the price of the cryptocurrency tumbled. Guggenheim Investments is an asset management firm with over $230 billion under management. The price of bitcoin dropped about 25% in the past 24 hours, before recovering slightly. The market cap of bitcoin has fallen from more than $760 billion to below $600 billion during the same time period.

Bitcoin’s parabolic rise is unsustainable in the near term. Vulnerable to a setback. The target technical upside of $35,000 has been exceeded. Time to take some money off the table.

Comments flooded his Twitter thread with many people accusing Minerd of manipulating the bitcoin market and wanting to purchase many bitcoins at a discount. “Take some off the table so you can scoop up cheap coin? Nah,” one Twitter user wrote. Another commented: “You are not getting my bitcoin. Nice try.” A third opined, “You must be new to bitcoin.”

Another Twitter user chimed in: “Everyone reading this needs to realize that Guggenheim has not even bought [bitcoin] yet. They are still waiting on the approval from the SEC, their ability to buy from Greyscale Trust doesn’t take into effect till January 31st.”

Trader and economist Alex Krüger shared Guggenheim’s filing with the U.S. Securities and Exchange Commission (SEC) on Twitter, pointing out:

According to the company’s SEC filing, “the Guggenheim Macro Opportunities Fund may seek investment exposure to bitcoin indirectly through investing up to 10% of its net asset value in Grayscale Bitcoin Trust (‘GBTC’), a privately offered investment vehicle that invests in bitcoin.”

In December, Minerd himself revealed that Guggenheim was waiting for the SEC to approve its fund to invest in BTC. “We made the decision to start allocating towards bitcoin when bitcoin was at $10,000,” he was quoted as saying. “It’s a little more challenging with the current price of $20,000.” Nonetheless, Minerd stressed that his firm will be buying bitcoin, predicting that the cryptocurrency would reach $400,000 based on its fundamentals.