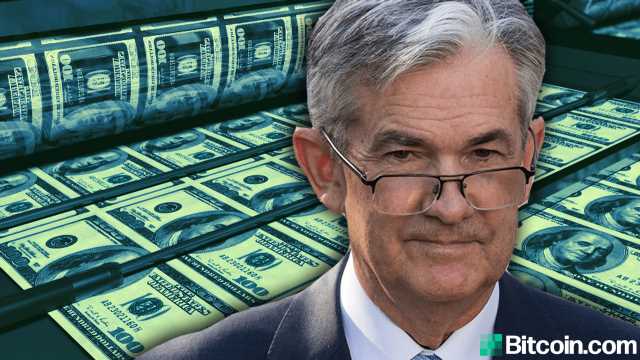 In a policy meeting on Wednesday, the U.S. Federal Reserve told the public that monetary easing will continue and the benchmark interest rate will be kept near zero. Just like previous statements from Federal Open Market Committee (FOMC) members, the committee within the central bank is not concerned about inflation and says that it should only have “transitory effects” on the American economy.

Inflation to Have ‘Transitory Effects,’ While ‘Recovery Is Uneven and Far From Complete’

The most recent FOMC meeting held on Wednesday was no different than the past number of committee gatherings which explained that the central bank is still dealing with pressure from the pandemic. A press release that followed the meeting highlighted that the “pandemic is causing tremendous human and economic hardship across the United States and around the world.”

The Federal Reserve, however, has seen indicators that “economic activity and employment have strengthened,” but Fed Chairman Jerome Powell stressed the recovery is “uneven and far from complete.”

The press release also admits that inflation has increased and states:

The sectors most adversely affected by the pandemic remain weak but have shown improvement. Inflation has risen, largely reflecting transitory factors.

The FOMC summary notes that financial conditions have stayed “accommodative” because of the measures the central bank has taken. The policies, the Fed believes, have allowed the “flow of credit to U.S. households and businesses.” Powell also noted that inflation could spike in the future and said these “one-time increases in prices are likely to only have transitory effects on inflation.”

“It will take some time before we see substantial further progress,” Powell insisted.

Meanwhile, investigative journalists, Pam and Russ Martens from Wall Street on Parade, published damning evidence against the Fed misleading the public when it comes to the Wall Street mega banks’ so-called “strength.” The Martens say that the scheme the Fed has been pulling in 2020 and into 2021, is the same as the “horror” mega banks pulled in 2008. As Bitcoin.com News has reported in the past, well before Covid-19 made headlines, central banks worldwide invoked massive monetary easing policy changes.

The Federal Reserve led the monetary easing movement and Powell stressed before Congress in 2020 that the mega banks were “a source of strength” to the American economy.

The Martens’ data shows that financial incumbents like JPMorgan Chase, Goldman Sachs, Bank of America, Morgan Stanley saw heavy losses from the start of 2020 upwards of 40 to 50%. Citigroup had seen losses upwards of 56% and by March 23, 2020.

“These five banks are highly interconnected via derivatives because they have exposure to the same counterparties (the entities on the other side of their trillions of dollars in derivative trades),” the report highlights. “Sophisticated traders on Wall Street understand these risks and want to run from these banks in any crisis situation.”

The U.S. central bank’s FOMC press release further reveals that the bond purchasing will continue alongside the near-zero percent benchmark interest rate. Further, the Fed is sticking to the typical 2% inflation mark as a target to watch closely, and the bank knows it will exceed that rate for a transitory period.

“[The FOMC] decided to keep the target range for the federal funds rate at 0 to 1/4 percent and expects it will be appropriate to maintain this target range,” the Fed announcement specifications note. The Fed will also increase the amount of Treasury securities the central bank holds.