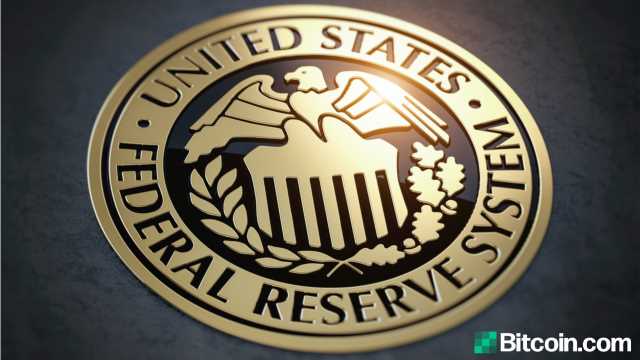 After pumping extreme amounts of liquidity into markets, the U.S. Federal Reserve seems to be tapering back monetary easing policy via reverse repos (RRP). Following this week’s published minutes report from the Fed’s April monetary policy meeting, it seemed as though members of the central bank were prepared to discuss rolling back large-scale Treasury and mortgage-backed securities (MBS) purchases. This week, during a three-day period, the U.S. central bank removed $351 billion in liquidity according to reports.

Last week, the Federal Reserve released the minutes’ transcript from the central bank’s April 27-28 policy meeting. The minutes’ transcript noted that a “number” of Fed board members have initiated the conversation about tapering back quantitative easing (QE) policy. Beyond initiating the conversation, the Fed said that it needed to see “substantial” progress in order to curb the massive Treasury note and MBS purchases. Reiterating this opinion, Fed Chair Jerome Powell told reporters it wasn’t the time to start the process of sunsetting QE purchases.

“No, it is not time yet. We have said we’ll let the public know when it is time to have that conversation, and we’ve said we’d do that well in advance of any actual decision to taper our asset purchases, and we will do so,” Powell stressed.

However, Powell’s commentary is contradictory to the actions the Fed participated in earlier this week. In fact, the Fed has begun tapering back QE without informing the general public in a loud fashion via mainstream media. After the myriad of press reports disclosing the statements from the recently published minutes transcript, the public has been led to believe the Fed is not even ready to talk about tapering back QE. That’s not the case according to data stemming from reverse repo (RRP) operations that saw $351 billion in liquidity removed from markets.

The financial columnist from Wolf Street, Wolf Richter explained that the Fed removed this liquidity as “the banking system creaks under [a] mountain of reserves.” Essentially, RRP operations are the exact opposite of QE and the central bank removes M1 from the system by selling Treasuries back to the market. Richter’s editorial and a report published by the Wall Street Journal’s Michael Derby, are the only two reports that disclose the RRP operations.

Meanwhile, a majority of mainstream media publications continue to lead the public to believe the Fed is not quite ready to have the tapering conversation. On May 20, 2021, the U.S. central bank started the sell-off of $351 billion in Treasuries via overnight RRP operations. The deal between the Fed was with 48 counterparties, and no MBS sales are mentioned in any of the published reports. The recently published minutes report did discuss RRP tools and the recent action suggests the Fed is unloading liability.

Richter’s report also details that the Fed will likely raise the rate the central bank pays on reserves during the next monetary policy meeting. The minutes’ transcript explains that pressure has pushed the central bank to adjust overnight rates, because RRPs have been “trading at negative rates.” Members of the System Open Market Account (SOMA), an organization managed by the Fed, noticed the negative rates while acquiring large-scale assets through operations in the open market.

“The SOMA manager noted that downward pressure on overnight rates in coming months could result in conditions that warrant consideration of a modest adjustment to administered rates and could ultimately lead to a greater share of Federal Reserve balance sheet expansion being channeled into ON RRP [overnight reverse repurchase agreement] and other Federal Reserve liabilities,” the Fed’s minutes transcript notes.

Wolf Street’s Richter stresses in his report that he’s never seen the banking system beg for the Fed to roll back QE. The financial reporter thinks that the Fed has figured out that it might go past the point of no return.

“This is the first time that I have seen Wall Street banks clamoring for the Fed to back off QE as the banking system is creaking and straining under the huge pile of reserves,” Richter’s report emphasizes. “And apparently, from the response disclosed in the minutes, the Fed is figuring out that you can push QE only so far before something big is going to go haywire with unforeseen consequences,” he added.