Analysis: How the Rush to Offer Crypto Put FX Brokers on Google’s BlackList

Yesterday’s official announcement from Google that it is preparing to ban the advertisement of forex and CFDs along with ICOs was a big surprise for the industry. The rise of the ICO was a phenomenon closely watched by many over the past several quarters. The more that cryptocurrency became popular, the more hollow projects were seeking funding, eventually warranting a stop to it all. No surprise here. 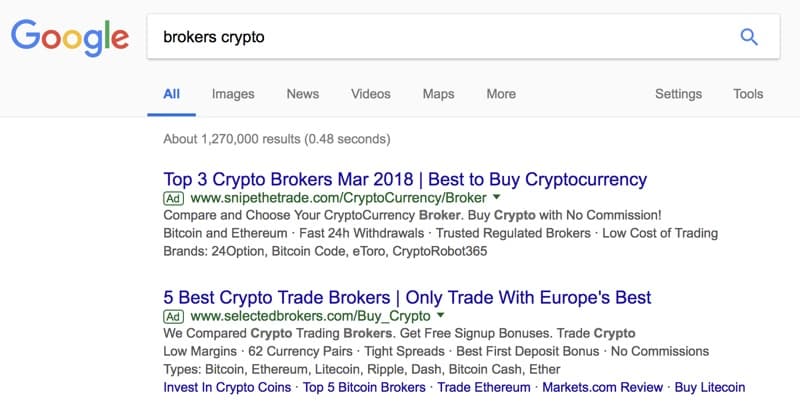 Google’s Play on Affiliates: a Testament to the Reasoning of the Ban

After binary options ceased to be the hottest business for affiliates, they started switching to cryptocurrencies. The most sought-after term on Google related to finance during the second half of 2017 was Bitcoin. The craze took over CNBC and Bloomberg in the fourth quarter of the year and personalities from the industry were appearing left and right.

The job of affiliate marketers is to identify such trends and convert traffic to brokers. And the fourth quarter of the year was great for traffic for all affiliates that switched to crypto. It was horrible for the brokers – they were decimated by a one-sided market unseen in this industry, but affiliates were celebrating as they got paid for the traffic.

Brokers were getting new clients but were not making any money from them. It all came to a point when affiliates were no longer welcome to send crypto traffic to brokers. That, of course, changed when prices changed direction and started chopping away at HODL-ers. Brokers were happy, the offerings of cryptocurrency trading resumed and crypto-traffic was welcome again.

Google is Only Reacting

I remember starting to watch a video on Youtube, which started with an advertisement from DASH. This is when I thought, that this is the end of it all. You know a good product when you don’t need advertising for it to be successful, right?

Well, unfortunately for brokers and the crypto-industry, the most aggressive players in the market, looking to make a quick buck, have attracted the attention of the regulators. The phenomenon of cryptocurrency has become associated with words like ‘fraud’, ‘Ponzi’, ‘boiler room’, and my personal favorite: ‘pump and dump’.

You can’t expect the SEC to look away when you openly use pump and dump tactics and boast about it. (Hello, John McAfee!)

Is the Ban Related to Regulators?

Google and Facebook might both be reacting to the SEC’s decision to flip the switch on crypto, and in all fairness, they probably don’t have much choice. As was reported by the FT last night, European regulators are considering a digital tax for companies that are working in the space.

Since EU financial regulators have a problem with forex and CFDs, Google’s action will only score it points as it will certainly facilitate the cleanup of the industry whose design is being finalized by ESMA as we speak.

It would not be surprising if when approving brokers for advertising, Google presents a condition that ensures that the company is not providing cryptocurrency trading. At least, if the dominant search engine in the world asks for it, we will certainly know that the ban is indeed a giant backfire for the industry, resulting from the decision to offer cryptocurrency CFDs.