The World Cup–winning U.S. women’s soccer team will be showered with ticker tape Wednesday in a parade up the Canyon of Heroes in lower Manhattan.

“On and off the field, this team represents what’s best about New York City and our nation,” said Mayor Bill de Blasio, who was campaigning for president in South Carolina as he announced plans for the parade after the team’s 2-0 victory over the Netherlands on Sunday.

“The confidence, grit and perseverance of the US Women’s National Soccer Team serve as an inspiration to all who watch them,” the mayor said in a statement.

A de Blasio rep said the mayor would be back from the campaign trail for the parade, which will follow the traditional route up Broadway from Battery Park to City Hall.

It will be the city’s first ticker-tape parade since the women’s team won the 2015 cup.

Then, New Yorkers rained down more than 30 tons of confetti and party favors on the victorious players, according to city Department of Sanitation figures. 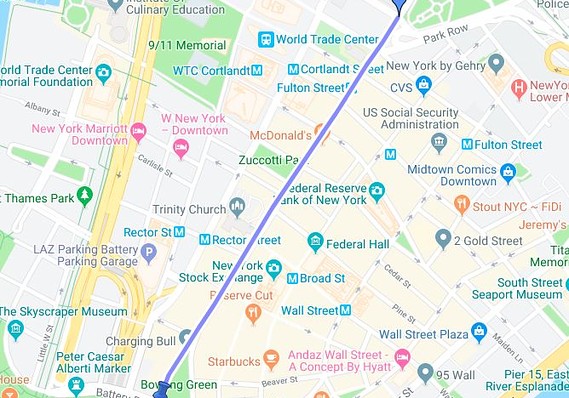 De Blasio’s announcement came as New Yorkers and U.S. fans across the globe celebrated the historic win — the squad’s fourth in the cup’s history, twice as many as any other national team.

Heavily attended watch parties under the Manhattan Bridge in Brooklyn and near the World Trade Center in Manhattan erupted into a churning sea of patriotism, with revelers shouting, “USA!” as the clock ran to 90 minutes and through five extra minutes of added time.

“We couldn’t be happier with the U.S. team,” said Lisa Montalvo-Diaz, who watched the game on a projector at T2 Plaza at the foot of 2 World Trade Center. She spoke through a sign-language translator because she is deaf.

Kevin Cruz of Passaic, N.J., who was draped in an American flag, said, “I’m glad we came into the city to watch this game. It’s a historic game, and it just feels right to watch the USA win in New York City.’’

The team even won praise from President Trump, who has been critical of team co-captain Megan Rapinoe since she said in June she would not visit the White House if the team won the World Cup.

“Congratulations to the U.S. Women’s Soccer Team on winning the World Cup! Great and exciting play. America is proud of you all!” read a post on the Trump account several hours after the victory.

It is commonplace for a president to invite winning sports teams to the White House — especially those that bring home international victories — but Trump on Sunday told reporters that he hadn’t considered whether he’d have the team over.

“We haven’t really thought about it,” he said.

“Yes! Fourth star. Back to back. Congrats to the record breakers on the @USWNT, an incredible team that’s always pushing themselves — and the rest of us — to be even better. Love this team. #OneNationOneTeam,” he wrote.

This report previously appeared at NYPost.com.