Dan Eberhart, the CEO of drilling services company Canary, explains why he believes the rising price of oil and gas is something President Biden ‘is going to have to worry about.’

President Joe Biden made an abrupt about-face when he called on U.S. energy producers to step up domestic oil and natural gas output to address rising prices and the growing supply crisis prompted by Russia’s invasion of Ukraine and the subsequent sanctions on Russia’s oil exports.

While overdue, Biden’s appeal may fall on deaf ears – just as his pleas to Saudi Arabia, Iran, Venezuela and other producing nations unfriendly to the United States have.

Actions speak louder than words, and Biden’s agenda of ending the fossil fuel era is considered hostile by most U.S. oil and gas producers, who also saw Biden’s request of members of the OPEC cartel as a slap in the face. Much bad blood and distrust exist between America’s traditional energy producers and the progressive wing of Biden’s coalition – a suspicion that won’t disappear overnight.

GAS PRICES: FUEL TYPE CAN SAVE YOU MONEY AT THE PUMP

Even after Biden’s recent messaging shift, his administration continues to advance an aggressive green agenda designed to cut off access to capital for new exploration and strangle the domestic oil industry.

Actions speak louder than words, and Biden’s agenda of ending the fossil fuel era is considered hostile by most U.S. oil and gas producers, who also saw Biden’s request of members of the OPEC cartel as a slap in the face.

The White House has limited ability to influence the near-term domestic oil and gas production. We do not have national oil companies like Saudi Arabia, Russia, or Venezuela, so Biden must rely on the private sector, which itself is accountable to its shareholders. Those shareholders have grown weary of high investment and low dividends after the rapid growth of the shale sector in the last decade. They now insist on fiscal discipline, limiting how much capital CEOs can invest in new exploration.

A timeline of President Biden’s energy policy actions over the past two years illustrates how far he must now go to reverse the bad blood – and the incentive structure – his administration has built up with the industry. Here’s a recap of Biden’s anti-oil policies since taking office on January 20, 2021.

*January 20, 2021: One of Biden’s first actions was to revoke approval for the Keystone XL pipeline and impose a moratorium on oil and gas leasing on federal lands and waters. Roughly 25% of U.S. production comes from federal areas. The Keystone XL cancellation confirmed to many policy-watchers Biden’s willingness to use one of climate activists’ favorite tactics – blocking "midstream" pipelines – to restrict "upstream" production. The moves were part of Biden’s broader climate agenda and target to reduce U.S. greenhouse gas emissions by 50% by 2030 and achieve net-zero emissions by 2050. 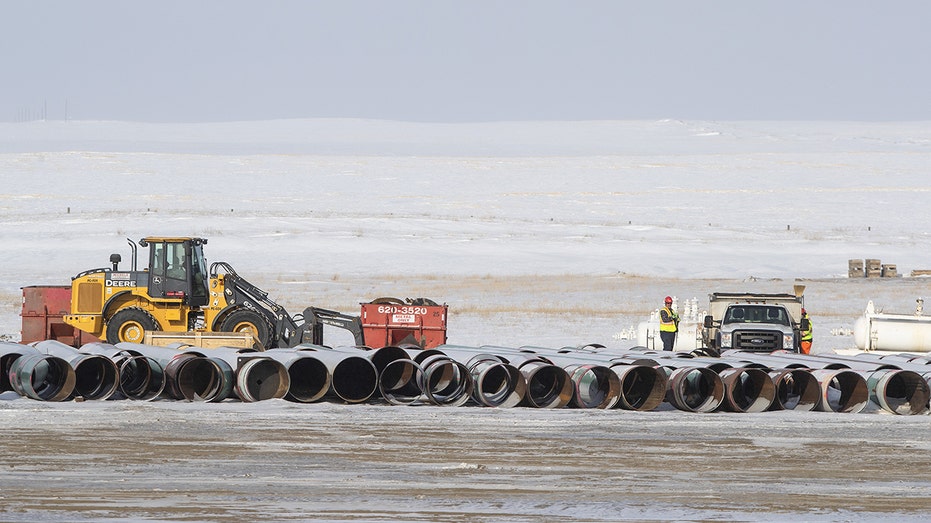 Workers load a truck with equipment at a pipe yard for the Keystone XL pipeline in Oyen, Alberta, Canada, on Tuesday, Jan. 26, 2021.  (Jason Franson/Bloomberg / Getty Images)

* February 26, 2021: Biden updates the "social cost of greenhouse gas emissions," dramatically altering the way the U.S. government calculates the real-world costs of climate change. The move could reshape a range of consequences, from whether to allow new fossil fuel leasing on federal lands and waters to what sort of steel is used in taxpayer-funded infrastructure projects. The administration plans to boost the figure it will use to assess greenhouse gas pollution's damage inflicts on society to $51 per ton of carbon dioxide – a rate more than seven times higher than that used by former president Donald Trump. But experts say it could reach as high as $125 per ton once the administration conducts a more thorough analysis. This would apply to any new oil and gas lease sale, raising producers’ costs to deliver new supplies.

* June 1, 2021:  Biden proposed eliminating a slew of tax benefits for oil, gas and coal producers in favor of electric vehicles and other low-carbon energy alternatives as part of his $6 trillion budget for the next fiscal year. It proposed repealing: the pass-through exemption from corporate income tax for partnerships that derive at least 90% of gross income from natural resources; use of percentage depletion for oil and gas wells; expensing of intangible drilling costs; capital gains treatment for royalties; enhanced oil recovery credit; $3.90 per barrel credit for marginal oil wells; expensing of exploration and development costs, and other tax incentives. Eliminating these tax provisions imperils U.S. energy security by raising costs for domestic producers and would increase America’s reliance on foreign energy supplies. 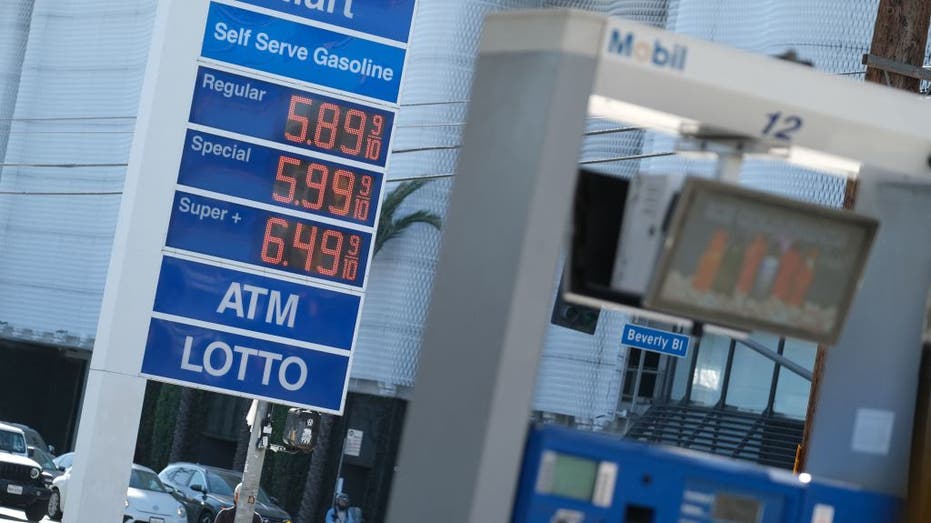 The high price of gasoline is displayed at a Los Angeles gas station on November 24, 2021. (CHRIS DELMAS/AFP / Getty Images)

* August 11, 2021: Biden calls on OPEC+ producers to increase supply to help curb rising oil prices, even though the U.S. is one of the three largest producers in the world and can deliver supply with a lower carbon footprint than most unregulated national oil companies in the cartel. He would do this several times in the months that followed, including after Russia’s February 24, 2022 invasion of Ukraine.

* October 29, 2021: Biden and Democrats propose a "methane fee" in the proposed budget bill. The fee would start at $900 per ton in 2023 and increase to $1,500 in 2025. Methane is a potent greenhouse gas, and industry has been working to reduce fugitive emissions of it on its own. The industry has also embraced executive regulatory efforts to reduce methane emissions, including support for the Global Methane Pledge, which requires a 30 percent cut in methane emissions by 2030, one of the Biden administration’s priorities for the COP26 climate summit in Glasgow. But the fee structure would effectively serve as a tax on natural gas production, which is counterproductive to energy security and economic growth in the U.S.

* November 17, 2021: Biden sent a letter to Federal Trade Commission Chair Lina Khan encouraging an investigation into oil and gas companies and retail gasoline prices. The move infuriated oil executives, who Biden portrayed as scapegoats for rising inflationary pressures on Americans. In four months, it marked the second time that the White House requested a probe into retail fuel prices, even though gasoline prices are set in a global commodity marketplace and were only following market trends in crude and refined product prices. The surge in crude oil and gasoline prices reflects tightness in supply amid a rapid demand recovery from the Covid-19 pandemic.

* March 12, 2022: Congressional Democrats propose to tax top U.S. oil producers and importers and direct the collected money to Americans, an effort they said will curb profiteering in an era of high gasoline prices. The "windfall profit" legislation would put a 50% tax, charged for a barrel, on the price difference between the current cost of a barrel of oil and the average cost for a barrel between 2015 and 2019. Lawmakers contend it would raise an estimated $45 billion a year at $120 a barrel of oil. The measure proposed by Biden’s Democratic party completely ignores the reality that oil prices are set in a global commodity marketplace, not by individual companies.

* March 21, 2022: Biden’s Securities and Exchange Commission (SEC) proposes landmark climate rules. If finalized, the rules would fundamentally overhaul how publicly listed companies divulge detailed information about their climate risks and mitigation strategies. Large companies that do business in the U.S. would be required within three years to lay bare their contributions and vulnerabilities to climate change – including, in some cases, the greenhouse gas emissions associated with their customers and suppliers. The move is designed to divert investment away from fossil fuel producers, even though investors are already planning for the energy transition using their own environmental, social and governance (ESG) standards.

The Biden administration’s recent public comments suggest they are getting their act together around supplying Europe with more oil and gas.

However, the timeline indicates that they still have much work to do to convince the domestic industry that they are ready to prioritize energy security over climate goals. They could still do much more if they could climb down from their ESG thrones to fight the mounting economic war against Russia.

But it starts with actions, not words.

The Department of Interior should have also issued a final lease sale notice under the current five-year offshore oil and gas leasing program by March 2, 2022. That would provide sufficient time to hold the lease sale before the expiration of the current offshore program at the end of June and demonstrate a commitment to future exploration.

The administration should work with relevant agencies to ensure the permitting processes for oil and natural gas infrastructure – pipelines, terminals, etc. – are designed and implemented to ensure consistency, transparency, and timeliness in their application.

Lastly, the administration should work through the Commerce Department and our U.S. allies to encourage investment in the full range of energy projects worldwide and especially in Eastern Europe.

Dan Eberhart is the CEO of Canary, one of the largest privately-owned oilfield service companies in the United States.