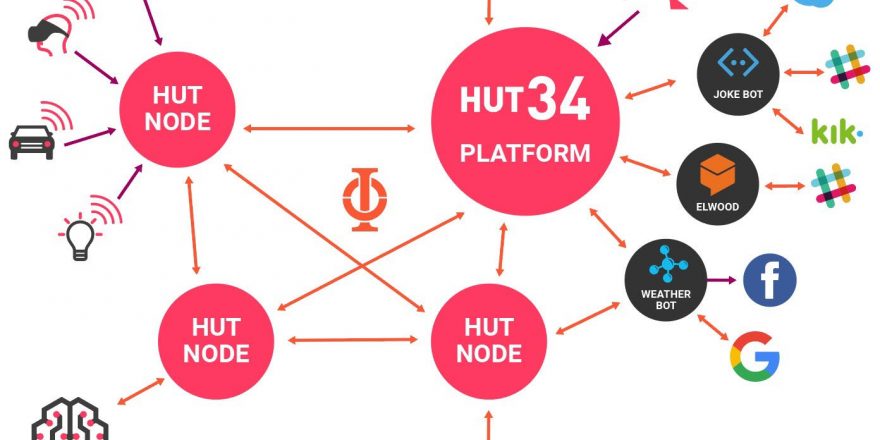 Whilst data volumes, Artificial Intelligence (AI), and the Internet of Things (IoT) are growing rapidly, data remains tightly controlled and monetised by large corporates,  domain specific A.I. often has deep but narrow wells of knowledge, and general search tools like Google, Alexa or Siri spread a very wide net, but lack the deep focus or context we often need.

What if you could have the best of all worlds? Benefit from open access to the resources of a wide and deep global knowledge base and the growing data volumes that drive it.

Participation and growth on the Hut34 Network will be fuelled by a blockchain-based cryptocoin called Entropy and the Hut34 Protocol, which will allow network participants to connect, route queries, resolve answers and monetise their data transactions.

One of the fastest growing trends in AI is automated chatbots, mechanised assistants and content platforms that work like a conversation to fulfil the queries of customers, users and peers. By 2020, Gartner Research thinks chatbots will power 85 percent of all customer interactions.

Problematically, monetisation of this space remains tightly controlled by large corporates, and elusive for many smaller producers, who struggle to profit from their data, information or expertise.

Facebook Messenger was home to 100,000 chatbots in April 2017. The service has 1.9bn monthly active users. That’s a lot of people accessing content generated by chatbots and other digital services. Imagine if all those chatbot and services could seamlessly trade information, improving user experience whilst profiting for their owners? Hut34 is building the network to achieve this.

Tim​ ​McNamara​ ​System​ ​Architect​ ​of​ ​Hut34, puts this into perspective, “Imagine weather buff Alice builds her own chatbot that responds to its users queries about tomorrow’s forecast. She has lots of users but can’t figure out how to monetise her content. She meets Bob, who runs a chatbot that shares jokes. Bob’s already part of the Hut34 network where he earns Entropy tokens from his content. He sets the price his content gets when another Hut34 content provider uses it.

“Charlie is a customer of Bob’s joke chatbot and uses it every day. One day he realises he’d like to know what the weather’s going to be like, so he asks Bob’s joke chatbot. Bob’s service doesn’t have weather data, so it sends a query across the Hut34 Network to find out. Alice’s weather chatbot, now part of the Network and the highest ranking content provider in her domain, answers Charlie’s question.

“But it’s about much more than just weather, jokes or even chatbots. Users accessing data through devices connected to the Hut34 Network are potential buyers with all that accompanying potential. You might deploy a bot for your users that doesn’t have access to any particular domain of data but instead searches the Hut34 Network for the best result, serving it to your users along with advertising. Maybe your bot routes its users to commercial operators to answer their questions and they pay you a referral fee. The list goes on…”

Key features of the Hut 34 Network

Tim said, “Hut34’s proof of concept is operational today, and we’re launching the Entropy Token Sale on the 2nd November, to establish the token ecosystem and fund further development.”