Traders and the market are showing extreme optimism on Oct. 15 after rumors and an assortment of documents suggest that the path toward a Bitcoin ETF approval has fewer obstacles lying ahead.

Following the positive news, the price of Bitcoin (BTC) rallied to nearly $63,000 for the first time since April and multiple altcoins saw their prices book triple-digit gains. 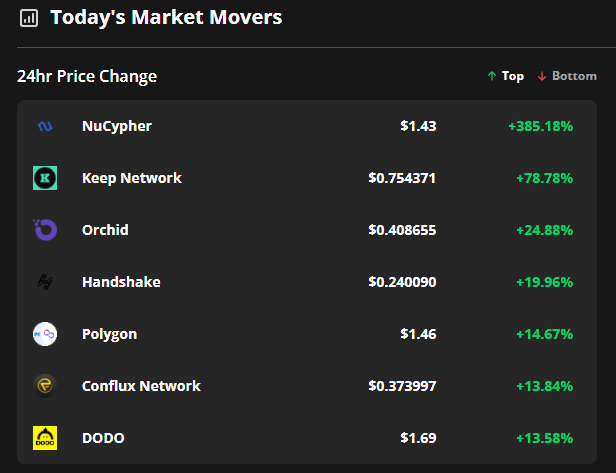 Data from Cointelegraph Markets Pro and TradingView shows that the biggest gainers over the past 24-hours were NuCypher (NU), Keep Network (KEEP) and Orchid (OXT). 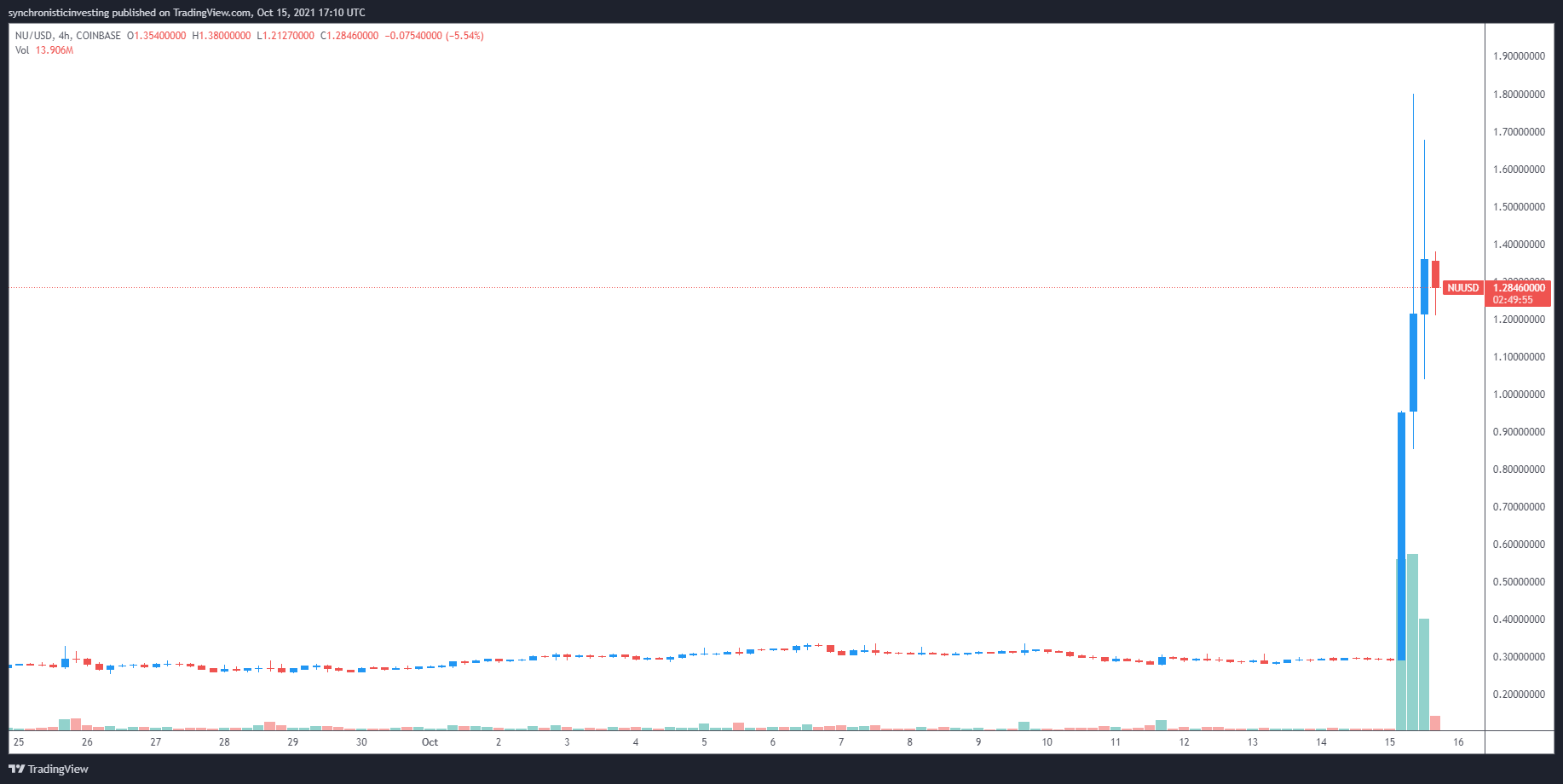 The surge in price and trading volume for NU come as the project helped facilitate the launch of tBTC v2 on the Keep Network with is designed to “extend the censorship-resistant properties of Bitcoin onto every network that can interoperate with Ethereum (ETH).

Censorship-resistance comes to the Ethereum network

Keep Network is a protocol designed to offer privacy-focused infrastructure on public blockchains through the creation of an incentivized network for storing and encrypting private data.

VORTECS(TM) data from Cointelegraph Markets Pro began to detect a bullish outlook for KEEP on Oct. 12, prior to the recent price rise. 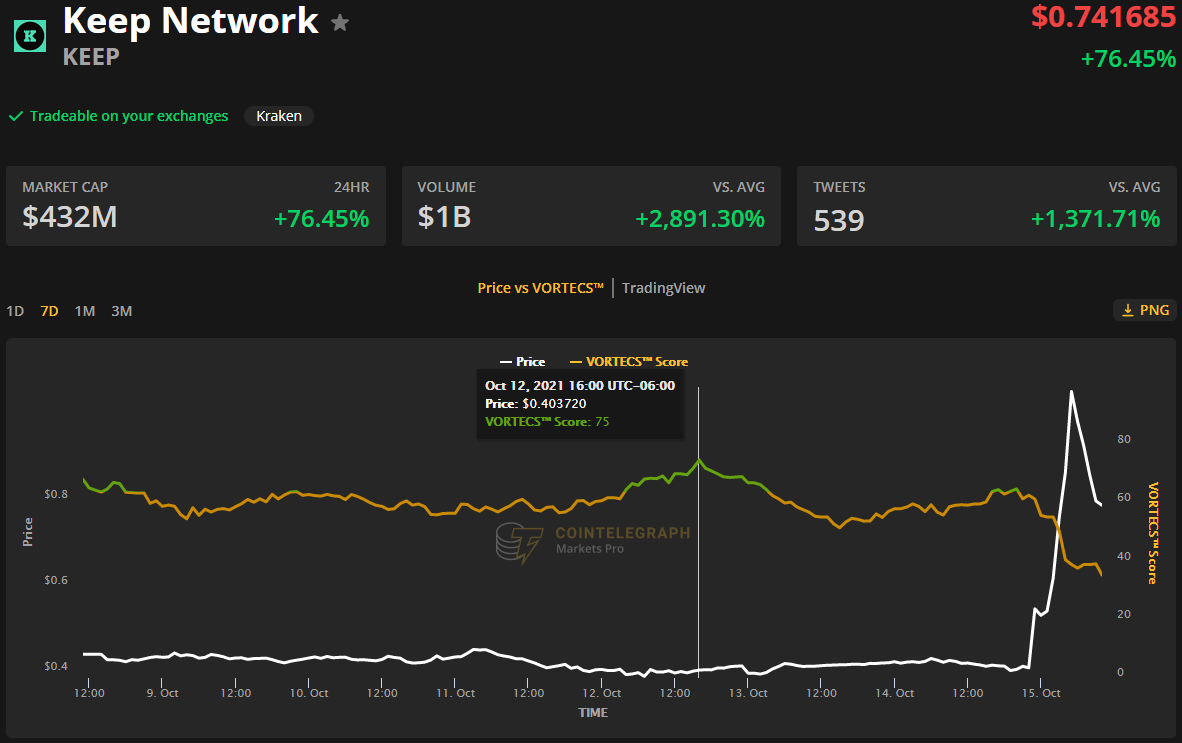 As seen in the chart above, the VORTECS(TM) Score for KEEP began to pick up on Oct. 12 and climbed to a high of 75 and the price increased 585% over the next day.

The spike in momentum for KEEP came along with the spike in the price of NU as the two projects collaborated to release tBTC v2 on the Keep Network.

Orchid is a cryptocurrency-powered virtual private network (VPN) that describes itself as “the world’s first incentivized, peer-to-peer privacy network.

VORTECS(TM) data from Cointelegraph Markets Pro began to detect a bullish outlook for OXT on Oct. 12, prior to the recent price rise. 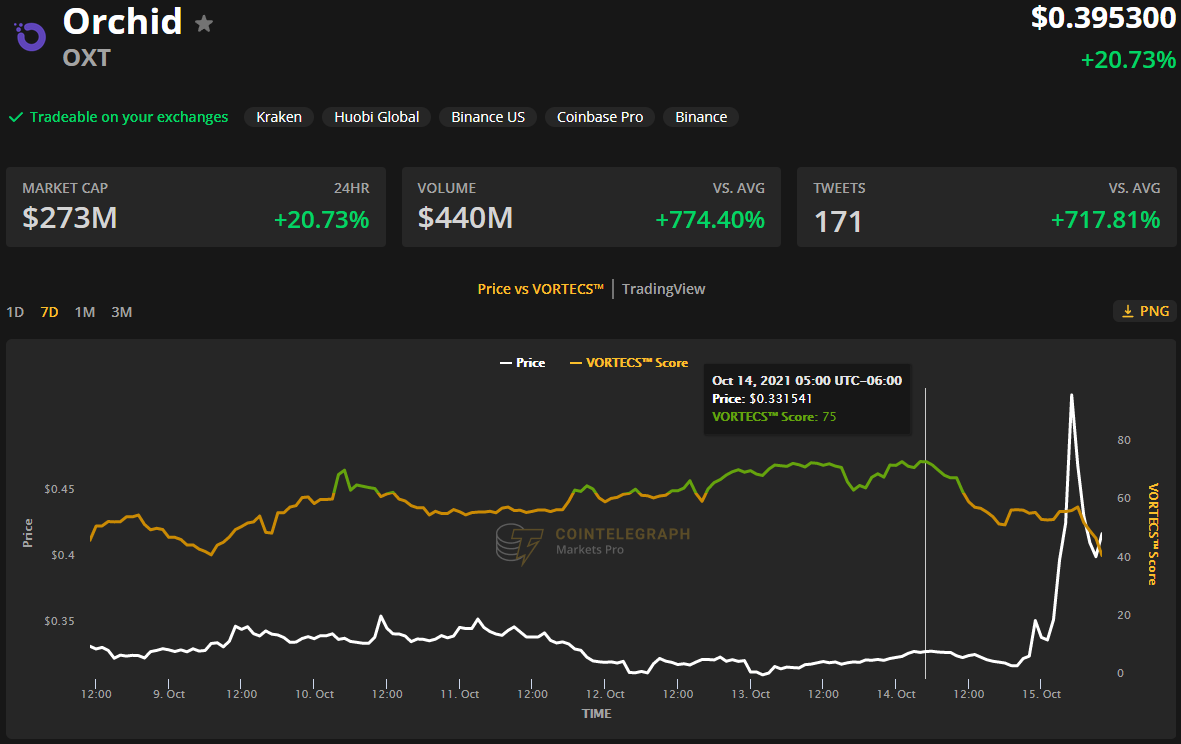 As seen in the chart above, the VORTECS(TM) Score for OXT climbed into the green zone on Oct. 12 and reached a high of 75 on Oct. 14, around 15 hours before its price spiked 82% over the next day.

A scroll through the project’s Twitter feed points to an increased focus on privacy concerns as the impetus behind Friday’s price surge, which lines up with the main goals of both Nu and KEEP suggesting that the sector of privacy-related projects could be starting to attract more attention.