Home » ICO » Ankr Network, Stacks and Kadena rally while most altcoins cool off

Ankr Network, Stacks and Kadena rally while most altcoins cool off

Even with Bitcoin (BTC) price on the verge of a new all-time high, the cryptocurrency market projects an aura of anxious optimism on Oct. 18 as investors await the official launch of the first Bitcoin exchange-traded fund (ETF), which is set to begin trading on Oct. 19.

While the market waits for the historic ETF launch, BTC bulls are battling to hold the $62,000 level as support. Meanwhile, a handful of altcoins posted double-digit rallies on Oct. 18 as traders look to capitalize on the gains they provide when Bitcoin price consolidates. 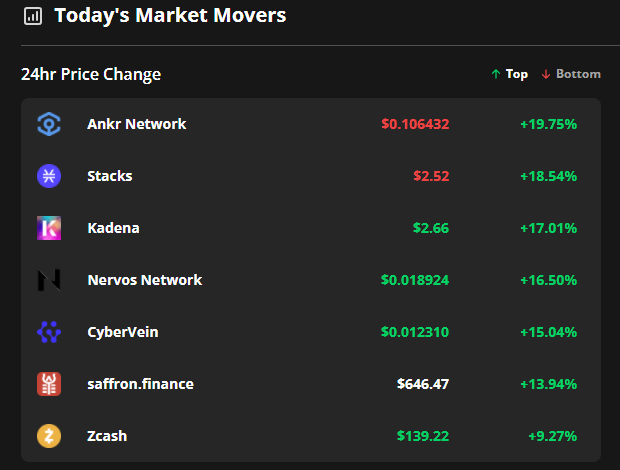 Data from Cointelegraph Markets Pro and TradingView shows that the biggest gainers over the past 24 hours were Ankr Network (ANKR), Stacks (STX) and Kadena (KDA).

Ankr Network’s blockchain solution is designed to use idle computing power from devices and data centers from around the world to help power the crypto ecosystem.

VORTECS(TM) data from Cointelegraph Markets Pro began to detect a bullish outlook for ANKR on Oct. 17, prior to the recent price rise. 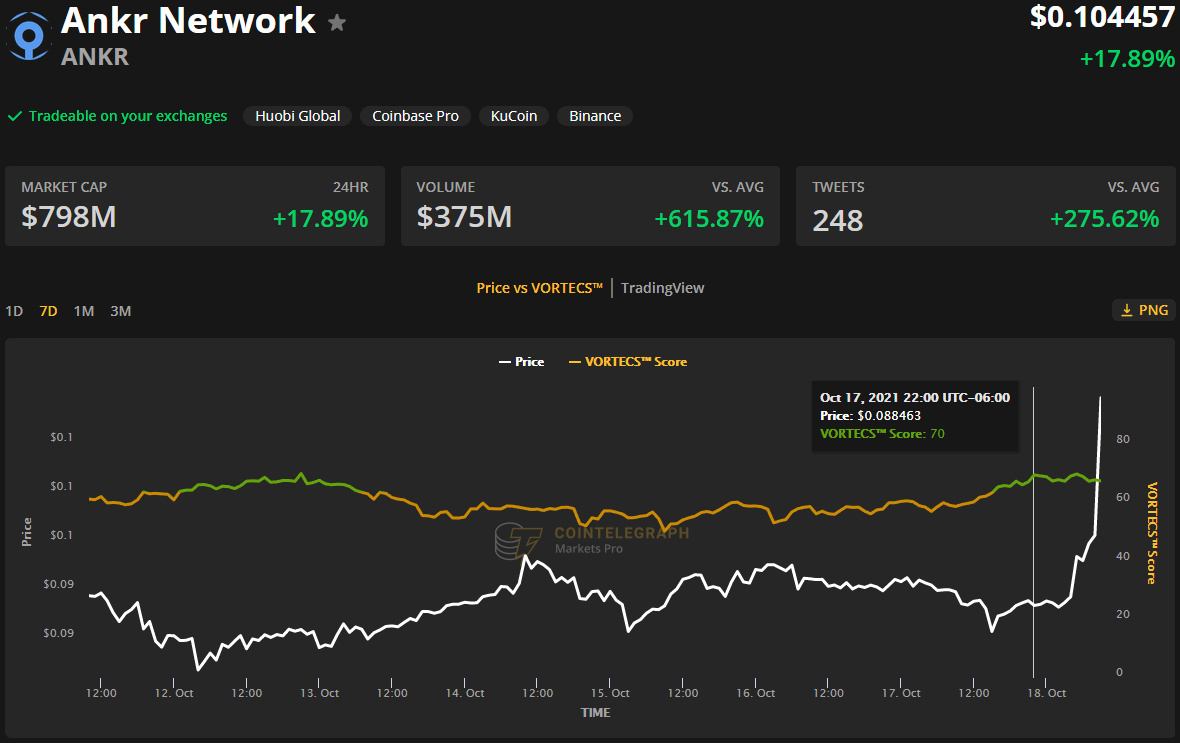 As seen in the chart above, the VORTECS(TM) Score for ANKR began to pick up on Oct. 17 and climbed to a high of 70 around four hours before the price spiked 46% over the next day.

Stacks (STX) is a layer-one blockchain solution focused on bringing smart contracts and decentralized applications to the Bitcoin network.

VORTECS(TM) data from Cointelegraph Markets Pro began to detect a bullish outlook for STX on Oct. 11, prior to the recent price rise. 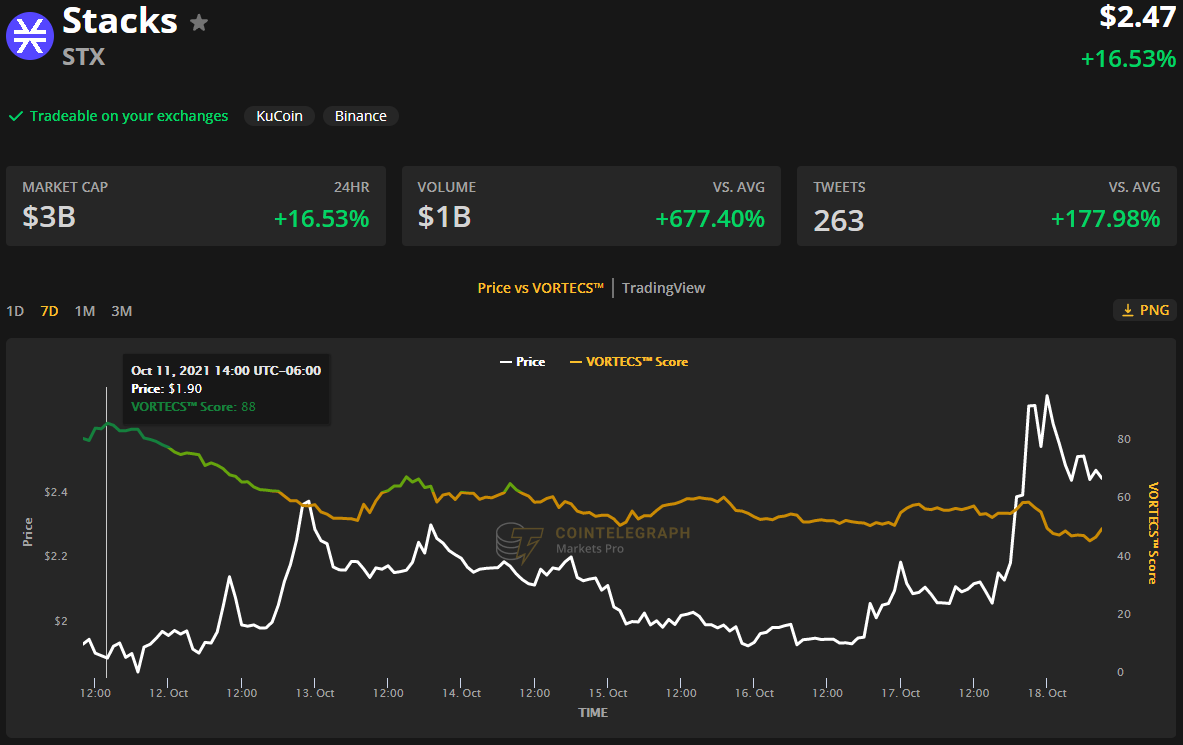 As seen in the chart above, the VORTECS(TM) Score for STX began to pick up on Oct.11 and reached a high of 88, around five hours before the price began to increase by 55% over the next week.

The rise in prominence for STX comes as the possible launch of multiple BTC ETFs has excited the wider investment community about the possibility of smart contract capabilities on the Bitcoin network.

The price of Kadena (KDA) also took a bullish turn over the last 24 hours. 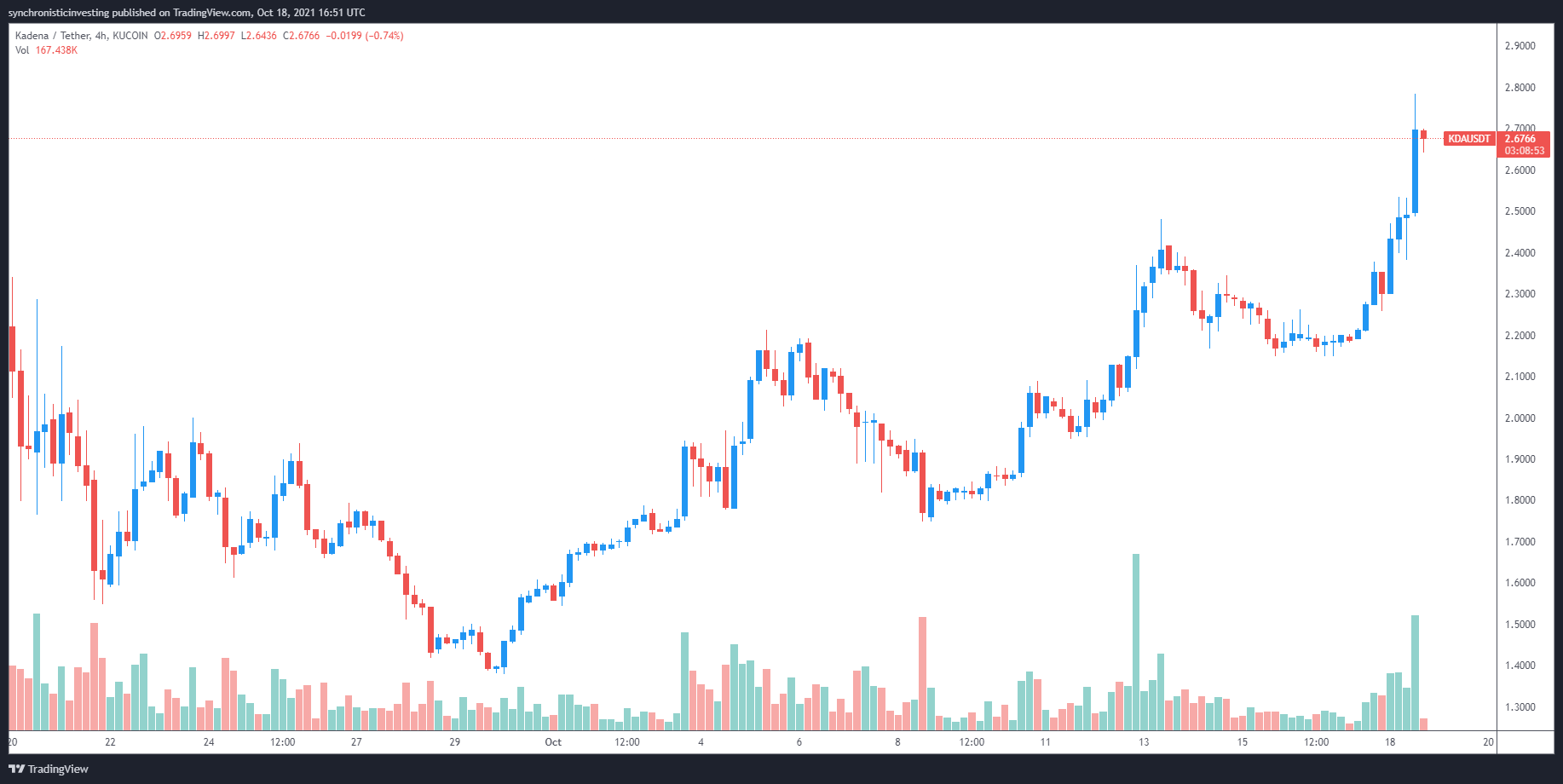 The increase in momentum for KDA comes following the protocol’s partnership with Immutable Records, which will bring a fully-built nonfungible token (NFT) marketplace to the Kadena ecosystem.