Yesterday, February 22nd, 2021, will go down in history as the day Ethereum took a massive nosedive on Kraken. Ethereum had opened the day at an approximate value of $1,900 only to dip to as low as $700 on the crypto exchange. This was a massive 63% decline with a majority of the losses experienced within a 30 minute time period as demonstrated by the following chart. 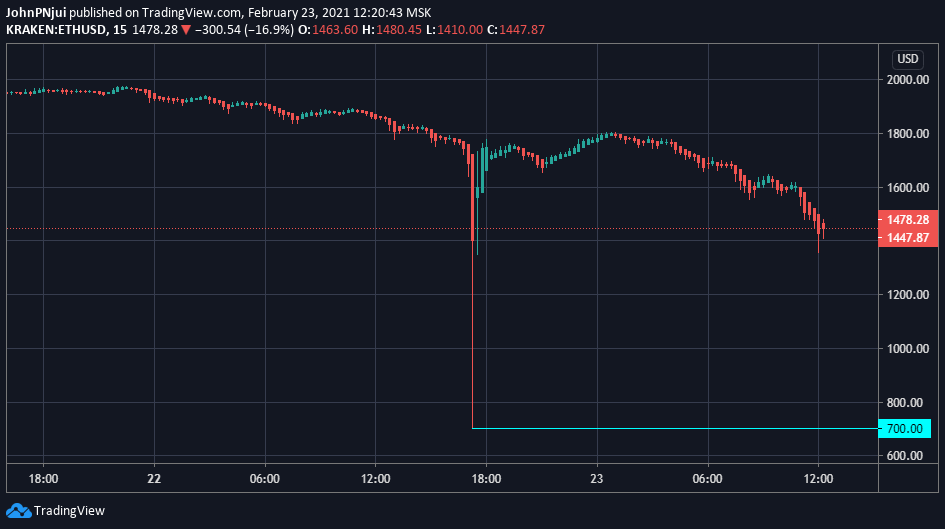 Ethereum’s Dip to $700 Foreshadows a Possible Future for ETH

Using the above Ethereum chart from Kraken and applying a bit of technical analysis, one quickly comes to the conclusion that $700 is a macro support zone for Ethereum moving forward.

The massive dip also reminded traders that Ethereum’s future is very much tied to that of Bitcoin. For Ethereum to drop to this level, Bitcoin had dropped by over $10k to the $47,600 price area thus causing a lot of panic selling in the crypto markets.

Therefore, if Bitcoin continues to correct to lower levels, Ethereum will most definitely be affected despite having several bullish fundamental factors that should naturally lead to a price increment.

To begin with, Ethereum is well on its way towards becoming an institutional asset with the introduction of the CME ETH Futures. Secondly, EIP-1559 has a high chance of being approved in the near future with a focus on solving the massive pain point of high gas fees during network congestion.

Ethereum Might No Longer Be the Dominance Smart Contract Platform

However, the progress on Ethereum might not be enough to ward off more efficient networks such as the Binance Smart Chain, Cardano, Tron, Zilliqa, just to name a few.

Two days ago, popular crypto personality and analyst, Udi Wertheimer, warned of Ethereum losing out to the aforementioned blockchain networks via the following statement.

I think this is Ethereum’s last cycle as the top smart contract platform.

Yesterday, BSC settled 5 million ETH Ethereum itself settled around 7 million ETH. This could be over very fast.

To be fair, I’m using Binance-owned BSCscan for this, so the comparison might be off. But the trend shouldn’t be ignored.

For the longest time ETH shills argued that WBTC means that “bitcoin is migrating to Ethereum”. They’re going to be very salty soon!