The second most valued crypto asset by market cap has attained a new price high. Hitting $4,859 for the first time this year is a colossal move for Ether and its holders. All thanks to the weekly price levels that were sustained by the bulls, Ether managed to break out to the new level.

Analysts now maintain that they are positive for a higher yearly close for Ether. The asset is assumed to have more opportunities for more upside. A breakout to $5,000 is also imminent, given that the market isn’t plagued with any intense liquidation. 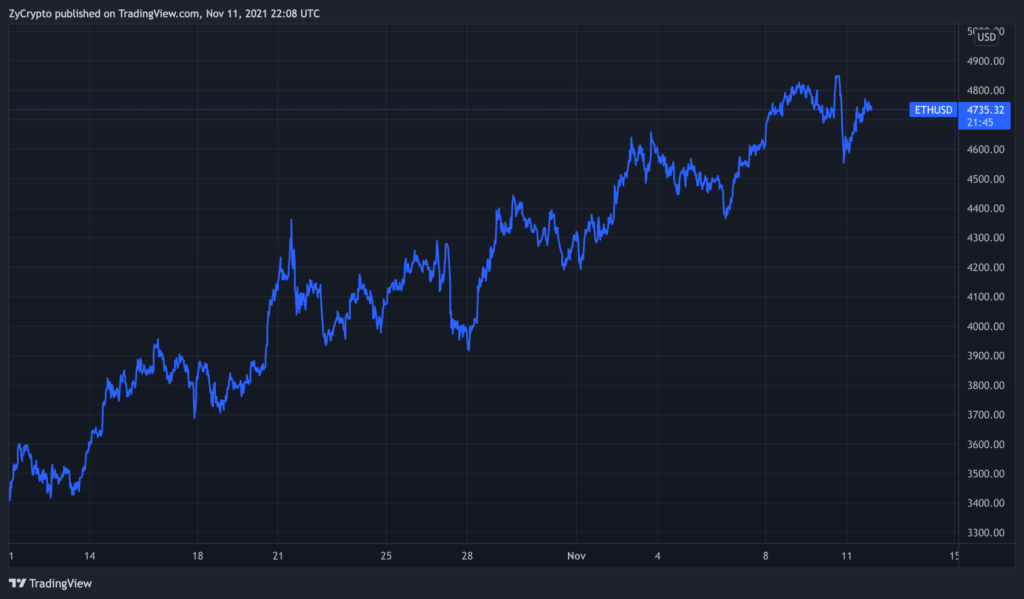 The price prediction discussions have heightened since the start of the fourth quarter. As the year nears a close, price predictions are pouring in for every cryptocurrency, including Ether. Expectations are collectively bullish for the asset, which are confident to see anywhere around $10,000 come December. However, JPMorgan strategists see a very complex outlook for Ether. As was noted in a recent report, JPMorgan sees Bitcoin taking a 15% downward swing, and Ether seeing a remarkable upsurge.

Given that Ether has outperformed numerous top assets this year, it is unlikely to many that ETH will underperform. Furthermore, the sentiments on Ether flipping Bitcoin are still very present.

The co-head of market neutral at BlockTower Capital recently amplified these views saying: “I definitely think there’s a really good chance for ether to surpass bitcoin. I wouldn’t be surprised if it happened within the cycle.”

This is expected to happen mid-next year when he expects the current market cycle to be over.

In a concluding statement, he reckons that Bitcoin is going to act more like gold. This could also imply that to him, Ether is the future of money, while Bitcoin will, for the most part, function as digital gold.

“Bitcoin is a store of value, it’s digital gold. And so its market cap, at most, is going to be somewhere around gold – maybe larger, because it has some properties that are better than gold. But that’s roughly the benchmark you’re going to use to cap its market size,”

At press time, Ether along with Bitcoin blinks in green. Market analysts target $5,000 in the coming days. Although it could happen sooner than expected.