Change is the only constant in the world, and the digital asset market rightfully abides by these words. In fact, for Ethereum, change has been second nature, with various developments doing the rounds on its blockchain over the past couple of years.

Today, we are at a point where while some tokens are migrating to Ethereum, other tokens are making a name for themselves (Chainlink being the biggest example) on its platform. This begs the question – How much change is too much for Ethereum, and is it getting out of hand?

Consider a brief example – Kyle Torpey of Longhash recently shared the above chart on Twitter, a chart that revealed that more than 100,000 BTC is currently on Ethereum. While they are not physically on the ETH chain, their value is functionally locked on the blockchain. Simpl put, Bitcoin IoUs such as WBTC on Ethereum can be used to extract a DeFi yield on Bitcoin holdings. The point to be noted here is that Bitcoin’s value was creating transactions on another chain.

Now, the development of interoperability is the reason why so many non-ETH tokens are currently functional on the chain. The rise of DeFi is unavoidable, and between all these innovations, it isn’t averse to say that Ether‘s value is getting hurt. 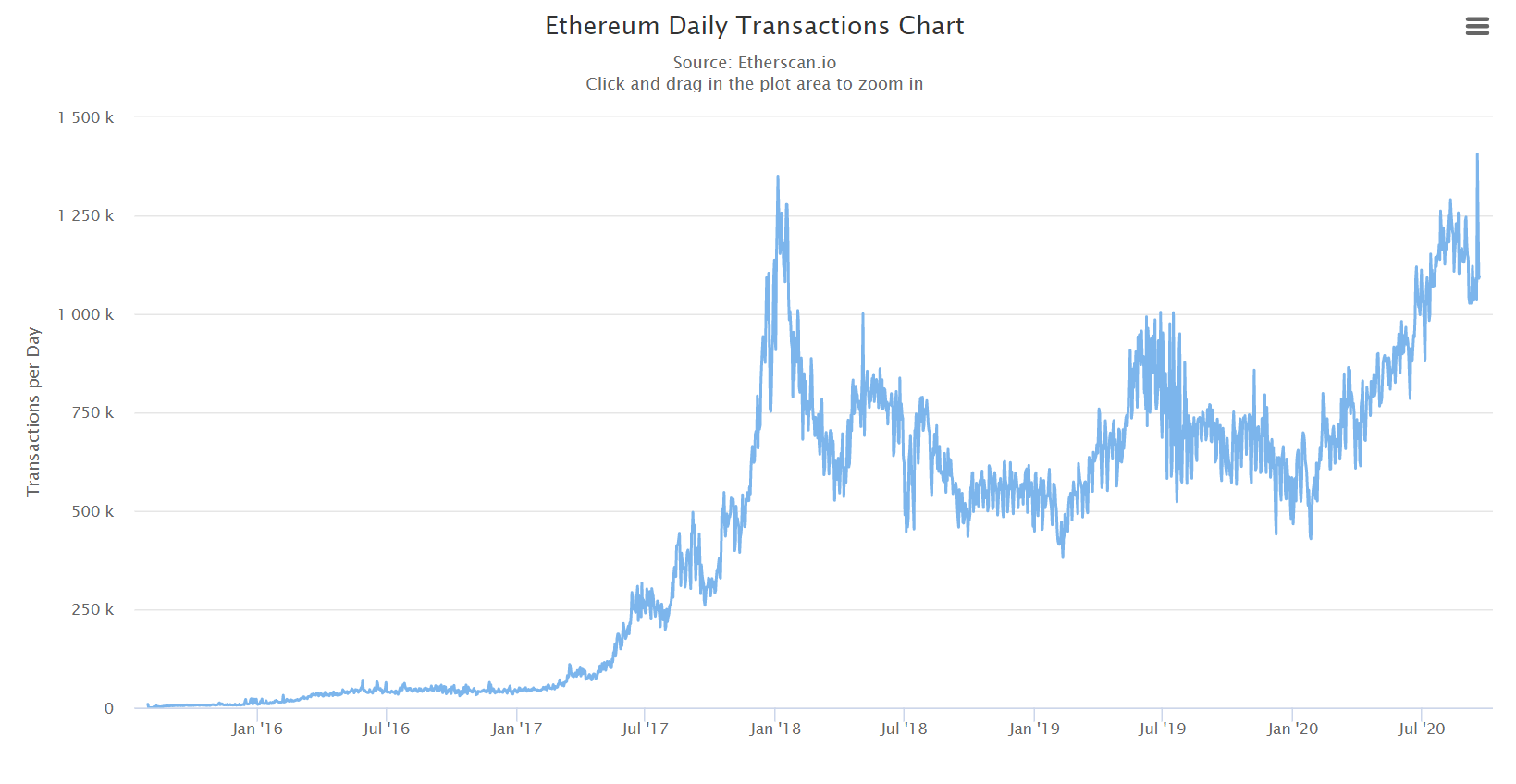 The above chart from Etherscan.io highlights daily transactions. On 4 January 2018, the number of txs reached an all-time high of 1,350,000 transactions. Back then, DeFi was largely a figment of imagination and possibly, all the transactions were with regards to Ether on Ethereum. Ether’s value was also over $1,000, at the time.

On 17 September 2020, however, the number of txs reached a new all-time high of 1,406,016, while Ether’s value was barely above $400. The transactions might have been (definitely!) DeFi-dominated as well. Isn’t the difference obvious?

It is easy to get dramatic and exaggerate developments in this industry, but the bottom line is pretty clear. Ether’s importance is unlikely to change. Gas transactions would still require ETH but with time, if Ether is only utilized for one particular objective, investors and traders would be reluctant to hold such an asset.

Michael Saylor, CEO of MicroStrategy, explained that one of the main reasons behind investing in Bitcoin was its unwillingness to change. The community has time and time again defended its initial ideals and the same cannot be said for ETH. Ethereum still feels like an unfinished product and its continuous tinkering may be depleting the primary token’s value.

So the question which again begs your attention is, How much change can Ethereum bring before Ether becomes dispensable? Well, we’ll find out soon enough.