Home » Economy » When insurers are afraid, we all should be very afraid of dodgy buildings

When insurers are afraid, we all should be very afraid of dodgy buildings

When insurers aren’t willing to do business with you, you know something is wrong. Their current unwillingness to offer policies to certain professions is a canary-in-the-coal-mine moment, pointing to troubling times ahead for the whole construction industry, as well as existing and future apartment owners. 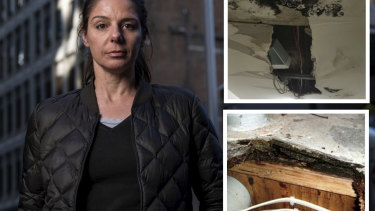 Nadia Younan was forced out of the Zetland complex. Credit:Dominic Lorrimer, supplied

Federal and state governments must urgently address problems that have festered for decades if we are to restore confidence in an industry critical to the Australian economy.

Amid the nightmare of building faults and evactions revealed at Sydney's Opal Tower and Mascot Towers, and following the high-rise fire at the Lacrossse apartments in Melbourne, the 30 owners of a water-damaged Zetland building have now been warned that a fire could cause its collapse – and they need to fix more than $5 million of defects with an insurance payout of only $1.7 million.

An immediate insurance challenge arises from a cladding crisis, sparked by the Lacrosse fire in 2014, which was followed by the Grenfell Tower catastrophe in London in 2017. Undoubtedly, this needs to be resolved as a priority, but it will be a pointless exercise unless electrical safety and non-conforming products are also addressed.

Non-conforming products such as Infinity are the cancer of the construction industry, a disease that threatens every consumer and that has been allowed to fester by successive state and national governments. If a systematic approach is not implemented, it will continue to eat away at Australia’s buildings – and apartment owners’ bank accounts.

Is this sensationalism? Certainly not to the owners.

We are pleased to see governments beginning to address this, and in principle the National Electrical and Communications Association supports NSW's Building Stronger Foundations discussion paper. Discussion Papers are a good start, but the industry and consumers need action. And we need change in the short term to restore trust.

Insurers – not to mention the public and governments – would surely sleep better at night if they knew fires weren’t going to start in the first place. That’s why NECA is calling for electrical safety audits to be included as part of government reforms.

Home electrical safety checks are neither actively encouraged or enforced across the states and territories. It is critical that all homebuyers are made aware of any wiring or electrical safety concerns upon the sale and purchase of a property. The same approach should occur for any new rental agreement.

A cynic might say the industry body representating electricians asking for this is self-serving, as they will benefit through additional work, but this is a safety issue. The fact is, defective work is causing fires and killing Australians each year. It's not about giving sparkies a short-term revenue boost, it’s about making everyone safer in the long term, including electricians whose lives are often most at risk because they have to fix the dodgy work.

An electrical safety audit on the point of sale of a home, for example, would be quick and inexpensive, a small fraction of the other fees involved in a home sale and at no cost to the taxpayer. Critically, it would provide the consumer with a list of any safety concerns along with possible remedies and costs.

This, alongside replacing combustible cladding, is a simple step that would make Australians much safer – and insurers a lot more comfortable. t is surprising that insurers have not sought such a requirement in their policies.

The next headlines could be about fatalities.

Suresh Manickam is chief executive of the National Electrical and Communications Association.