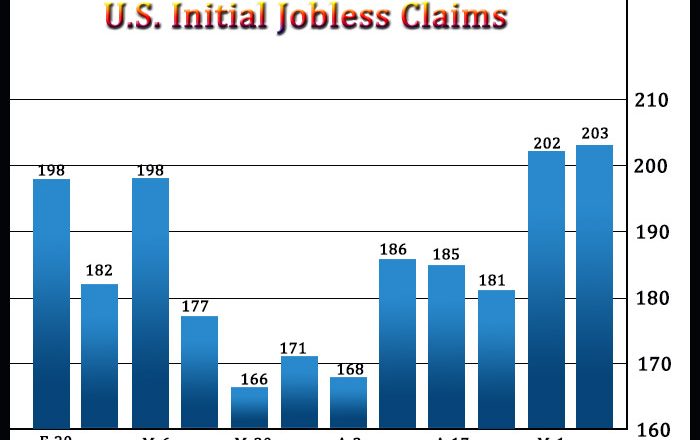 A report released by the Labor Department on Thursday unexpectedly showed a slight increase in first-time claims for U.S. unemployment benefits in the week ended May 7th.

The uptick surprised economists, who had expected jobless claims to dip to 195,000 from the 200,000 originally reported for the previous week.

“We expect initial claims to remain around 200k or slightly below, a level that is just below pre-pandemic averages and consistent with historically tight labor market conditions,” said Nancy Vanden Houten, Lead U.S. Economist at Oxford Economics.

“With job openings and quits at a record high, employers will keep layoffs to a minimum,” she added. “Even as the economy slows in response to high inflation and rising interest rates, we expect employers will slow the pace of hiring well in advance of laying off workers.”

The report showed the less volatile four-week moving average also edged up to 192,750, an increase of 4,250 from the previous week’s revised average of 188,500.

Meanwhile, the Labor Department said continuing claims, a reading on the number of people receiving ongoing unemployment assistance fell by 44,000 to 1.343 million in the week ended April 30th.

With the decrease, continuing claims once again fell to their lowest level since hitting 1.332 million in January of 1970.

Last Friday, the Labor Department released a separate report showing employment in the U.S. increased by more than expected in the month of April.

Economists had expected employment to climb by 391,000 jobs compared to the addition of 431,000 jobs originally reported for the previous month.

The Labor Department described the job growth as widespread, led by gains in the leisure and hospitality, manufacturing, and transportation and warehousing sectors.

Meanwhile, report showed the unemployment rate came in unchanged at 3.6 percent versus expectations the rate would edge down to 3.5 percent.