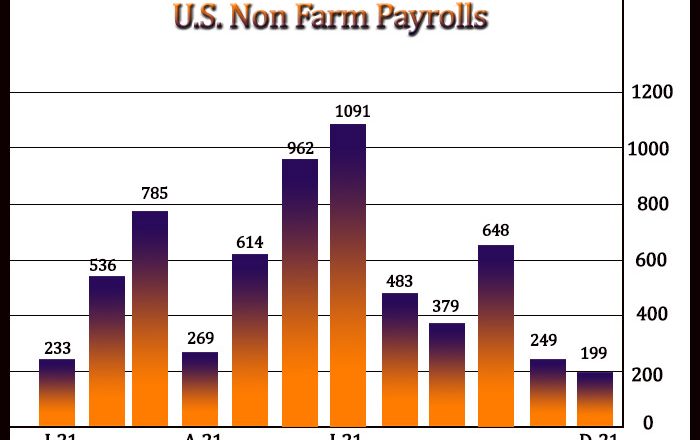 Employment in the U.S. increased by much less than expected in the month of December, according to a closely-watched report released by the Labor Department on Friday.

The report said non-farm payroll employment rose by 199,000 jobs in December after climbing by an upwardly revised 249,000 jobs in November.

Economists had expected employment to jump by 400,000 jobs compared to the addition of 210,000 jobs originally reported for the previous month.

The Labor Department said the increase in employment reflected job growth in the leisure and hospitality, professional and business services, manufacturing, construction, and transportation and warehousing sectors.

Meanwhile, the report showed a modest decrease in government jobs as well as slight drops in retail and temporary help services jobs.

“Today’s data, collected around mid-month, do not yet include the full impact of the new Omicron variant,” noted Dr. Christoph Balz, Senior Economist at Commerzbank. “The January report is therefore likely to be weaker.”

He added, “However, as the impact of the pandemic diminished from wave to wave, this should only slow the recovery in the labor market somewhat in the short term.”

With the bigger than expected decrease, the unemployment rate fell to its lowest level since hitting 3.5 percent in February of 2020.

The drop in the unemployment rate came as household employment jumped by 651,000 persons, while the labor force increased by 168,000 persons.

The report also showed average hourly earnings increased by $0.19 or 0.6 percent to $31.31 in December. Annual wage growth slowed to 4.7 percent in December from 5.1 percent in November.