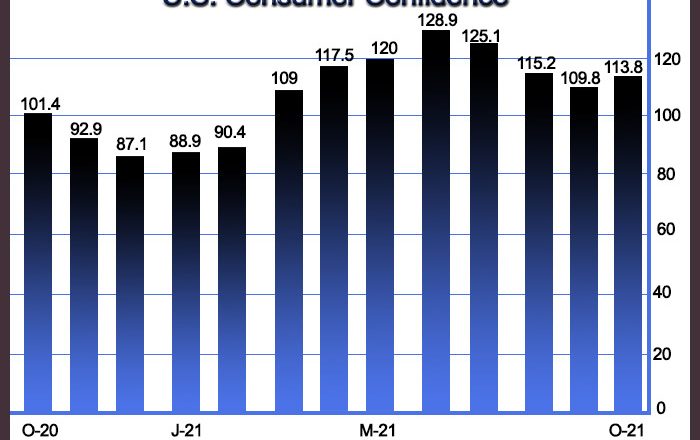 Reflecting easing concerns about the Delta variant of the coronavirus, the Conference Board released a report on Tuesday showing U.S. consumer confidence reversed a three-month downward trend in the month of October.

The Conference Board said its consumer confidence index climbed to 113.8 in October from an upwardly revised 109.8 in September.

The rebound surprised economists, who had expected the consumer confidence index to edge down to 109.0 from the 109.3 originally reported for the previous month.

“While short-term inflation concerns rose to a 13-year high, the impact on confidence was muted,” said Lynn Franco, Senior Director of Economic Indicators at The Conference Board.

She added, “The proportion of consumers planning to purchase homes, automobiles, and major appliances all increased in October—a sign that consumer spending will continue to support economic growth through the final months of 2021.”

While the Conference Board described consumers’ optimism about the short-term business conditions outlook as “mixed,” the expectations index still climbed to 91.3 in October from 86.7 in September.

The Conference Board noted consumers were more optimistic about the short-term labor market outlook as well as their short-term financial prospects.

On Friday, the University of Michigan is scheduled to release its revised reading on consumer sentiment in the month of October.

The consumer sentiment index for October is expected to be unrevised from the preliminary reading of 71.4, which was down from 72.8 in September.