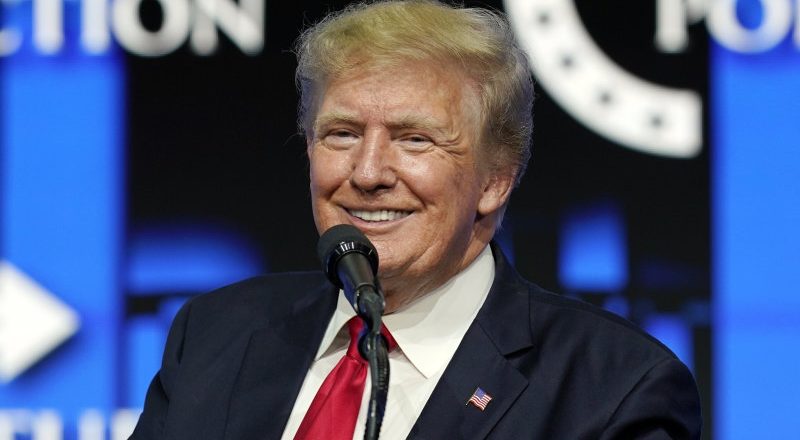 Donald Trump’s sagging fortune is suddenly poised to get a massive boost from meme-stock mania.

News this week that the former president’s nascent media enterprise, Trump Media & Technology Group, is planning to go public via a special purpose acquisition company (SPAC) has sent retail investors into a frenzy, even with few details released. The stock gain drove the implied value of the new venture to more than $US8.2 billion ($11 billion). 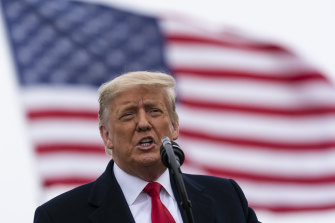 The deal could mark a sharp turnaround for a post-presidency that hasn’t been kind to the billionaire’s business empire.Credit:AP

Based on figures from press releases and filings to the Securities and Exchange Commission, it appears Trump will own more than 50 per cent of the combined company. At its current value, that would make him the richest he’s ever been, up from his estimated net worth now of $US2.5 billion, according to the Bloomberg Billionaires Index.

In the rollercoaster world of Reddit-fuelled trading and grandiose SPAC hype, those gains are hardly firm. But the money betting on a Trump media conglomerate marks a sharp turnaround for a post-presidency that hasn’t been kind to the billionaire’s business empire.

His Washington hotel, which was first put on the market in 2019, is still for sale, while the flagship midtown Manhattan tower that bears his name has growing vacancies. This summer, the chief financial officer of the Trump Organisation was charged with tax fraud. Trump’s net worth has declined by about $US500 million since he entered the White House, with the pandemic and fallout from January’s Capitol riot delivering added blows to his business interests.

Now comes the arrival of the social-media outlet that Trump, the leader in polls for the GOP presidential nomination in 2024, has been teasing at for some time. There are many reasons to be sceptical of the valuation. It will be months before the new venture publicly releases its first product, a social-media platform called Truth Social. And there are already technical issues. On Thursday, the Truth Social page was hacked to make it appear that Trump shared a photo of a defecating pig.

It’s also unclear how Trump plans to build a social-media platform on the scale of Twitter over the next few months, let alone a streaming service, which is the next phase of Trump Media’s plans, according to the press release announcing the company. That statement was light on numbers even by SPAC standards.

“We have no financials. We have no business plan. We don’t know how they got to the valuation. We have no information,” said Kristi Marvin, chief executive of research firm SPAC Insider. “That’s the fundamental problem.”

Representatives for Trump and Trump Media didn’t respond to requests for comment.

The business has ambitious plans that also include a potential “tech stack” to compete with Amazon.com’s AWS and Google’s Cloud, among others, according to a presentation on Trump Media’s website. As of now, Digital World’s board is light on members with media experience. Its chief executive officer, Patrick Orlando, is a former Deutsche Bank AG derivatives trader who co-founded a sugar-trading company and started a banking firm, Benessere Capital, before more recently embracing SPACs.

So far, retail investors have little concern. Shares of Digital World Acquisition Corp., the shell company merging with Trump’s new venture to take it public, closed Friday at $US94.20 — up from $US9.96 before the deal was announced on Wednesday. It’s also an increase of more than 800 per cent from a $US10 offering price that’s typically used in a SPAC merger agreement. 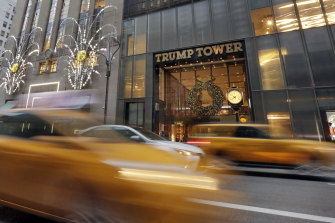 Most of Trump’s current wealth is tied to the Trump Organisation, a sprawling real estate business that has been hurt by the pandemic and legal troubles.Credit:AP

The press release said the new company would have an initial enterprise value of $US875 million. Assuming that calculation used a $US10 a share offering price and the $US293 million Digital World has in trust, the SPAC’s owners will get about 42 per cent of the combined company after accounting for shares the sponsor receives if a deal gets done.

That leaves 58 per cent for Trump and any partners he has in Trump Media. That stake is worth nearly $US4.8 billion, based on Digital World’s last price. The whole enterprise is being valued by the market at about $US8.2 billion, compared with Twitter’s almost $US50 billion equity valuation.

With the new media company’s valuation dwarfing the $US875 million enterprise value agreed to by Trump, he may have been able to negotiate a sweeter deal. Terms of the agreement will need to be more fully disclosed and could still change before an agreement gets voted on by shareholders, an event that is probably months away.

“We have no financials. We have no business plan. We don’t know how they got to the valuation. We have no information. That’s the fundamental problem.”

Most of Trump’s current wealth is tied to the Trump Organisation, a sprawling real estate business that has been hurt by the pandemic and legal troubles. There’s also at least $US590 million in debt coming due in the next four years linked to the company’s properties, more than half of which is personally guaranteed by Trump.

In April, the company scored a win when its partner in two skycrapers, Vornado Realty Trust, refinanced debt tied to its San Francisco tower, bringing $US617 million to its owners. The Trump Organisation also appears to be closing in on a sale of Washington’s Trump International Hotel, which was a hotspot for political allies, lobbyists and conservative media figures during his administration.

“We are one of the most under-leveraged real estate companies in the country relative to our assets,” Trump’s son Eric Trump said at the time of the Vornado deal. On paper, he and his brother Donald Trump Jr. have been leading the Trump Organisation. Chief financial officer Allen Weisselberg stepped down from his various roles after his indictment. The company was also charged with 15 felony counts in New York.

Trump hasn’t signalled that he’ll return to the Trump Organisation. His focus now is on dominating the Republican party and his new media project, which would give him an avenue to connect with supporters and raise money after he was banned from Facebook and Twitter. That would be key if he chooses to seek a second term in 2024.

When Trump first ran for president, he claimed to have a fortune of $US10 billion. Now the retail trading frenzy may bring him somewhat closer to getting there.