Consumer confidence has fallen to a two-year low as shoppers become increasingly concerned about the state of the economy and their chances of holding on to a job despite the prospect of personal income tax cuts and cheaper mortgages.

The Westpac-Melbourne Institute measure of consumer sentiment dropped 4.1 per cent in July with substantial falls in expectations about personal finances and the economy over the next year. 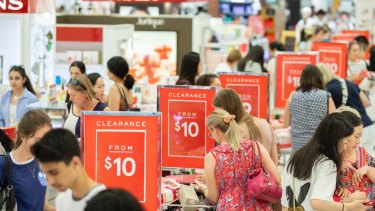 Consumer confidence has fallen to a 2 year low despite the prospect of lower interest rates and tax cutsCredit:Sitthixay Ditthavong

The survey was taken as the government's $158 billion personal income tax package was passed by the Parliament and soon after the Reserve Bank of Australia sliced official interest rates to a fresh all-time low of 1 per cent.

Westpac senior economist Matthew Hassan said there were serious issues arising from the survey which pointed to troubles ahead.

"The fall in sentiment this month is troubling as it comes against what should have been a supportive backdrop for confidence," he said.

Confidence among Coalition voters, which jumped last survey after the surprise May 18 election victory, fell back by 7.5 per cent.

Mr Hassan said while there had been hopes the combination of tax cuts and lower interest rates would boost consumer expectations, they had moved in the opposite direction.

"The muted sentiment response to both interest rate cuts and tax relief may stem from the fact that both developments were widely anticipated," he said.

The RBA has cut interest rates in a bid to drive down the unemployment rate which has inched up in recent months to 5.2 per cent.

The survey showed a 5.8 per cent lift in expectations of a higher jobless rate. It is now above its longer term average for the first time since mid-2017 with concerns about unemployment lifting sharply in NSW, Victoria and Western Australia.

Mr Hassan said the survey suggested confidence in the housing market was holding but consumers were increasingly worried about the broader economy.

Housing was a key element of the quarterly statement from the Council of Financial Regulators which is made up of representatives from the RBA, Treasury, the Australian Prudential Regulation Authority and the Australian Securities and Investments Commission.

The council, which met on July 5, discussed credit conditions and the "ongoing adjustment" in the housing market, noting some positive signs in Sydney and Melbourne but troubles in other capital cities.

"Council members discussed the signs of stabilisation in the Sydney and Melbourne housing markets, evident in both housing prices and auction clearance rates," it stated.

"They observed that the adjustment over the past two years has been sizeable and conditions in most other capital cities continue to be soft.

"Risks to lenders from housing price falls have to date been limited by the strength of the labour market, low interest rates and the improvement in lending standards in recent years. Housing loan arrears have continued to edge higher, but with significant variation between regions."