It wasn’t a panic, but a long-subdued measure of expected stock-market volatility was on track for its biggest one-day rise in nearly two months Monday as investors reacted to disappointing data on U.S. manufacturing activity and a tweet by President Donald Trump that underlined the scope for trade-related turmoil beyond U.S.-China talks.

“Volatility has finally sprung back to life after weeks of unusually quiet trading,” said Alec Young, managing director of global markets research at FTSE Russell, in a note.

The S&P 500 fell 0.9%, while the Dow Jones Industrial Average DJIA, -0.96% dropped 268.37 points, or 1%, with both indexes suffering their biggest one-day point and percentage decline since the same date. The moderate declines appeared largely orderly, with the historical comparisons offering more a reflection of just how subdued trading action has been in recent months.

And even with the rise, the VIX remains well below its long-term average around 19 after last week posting its lowest close since August 2018 — a decline that led some market watchers to declare equity investors were growing complacent about downside risks as major stock indexes hit a series of records in November.

A large number of short bets on volatility futures by speculators had also heightened concerns of a potential blow-up, stirring memories of early 2018, when a massive round of short covering sent the VIX soaring and was blamed for an equity selloff. Futures bets on falling volatility by potentially weak-handed speculators topped 2018 levels to reach a record, analysts at Jefferies noted last week, citing Commodity Futures Trading Commission data (see chart below). 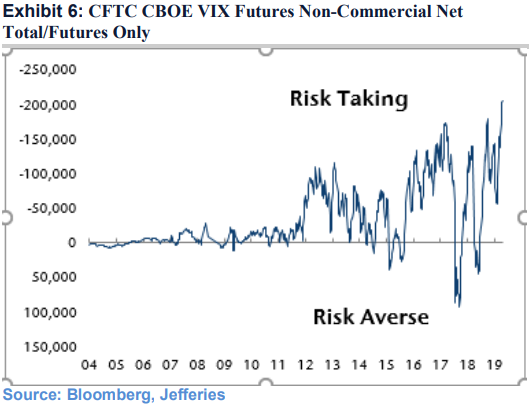 Young and other market-watchers attributed much of Monday’s trade action to a disappointing reading for the Institute for Supply Management’s manufacturing index, which fell to 48.1% in November from 48.3% in October, defying expectations for a rise to 49.2% and delivering its fourth straight sub-50% reading. An index reading below 50% indicates a contraction in activity.

“The culprit is weaker-than-expected November U.S. manufacturing data at a time when investors have been hoping for a positive inflection in global growth,” Young said. “However, in fairness to the bulls, it’s worth keeping a couple of positives in mind — the latest European and Chinese manufacturing data exceeded low expectations and after the recent run-up, stocks were priced for perfection, making them unusually vulnerable to any hint of negative news.”

Some weakness was also attributed to President Donald Trump’s decision to re-impose tariffs on aluminum and steel imports from Brazil and Argentina, while investors continued to eye long-running U.S.-China trade talks that have seemingly been at the center of concerns for much of this year.

Young played down the significance of the new tariffs, however, arguing that “as long as talks with China continue, today’s headlines are unlikely to change the trade narrative significantly.”