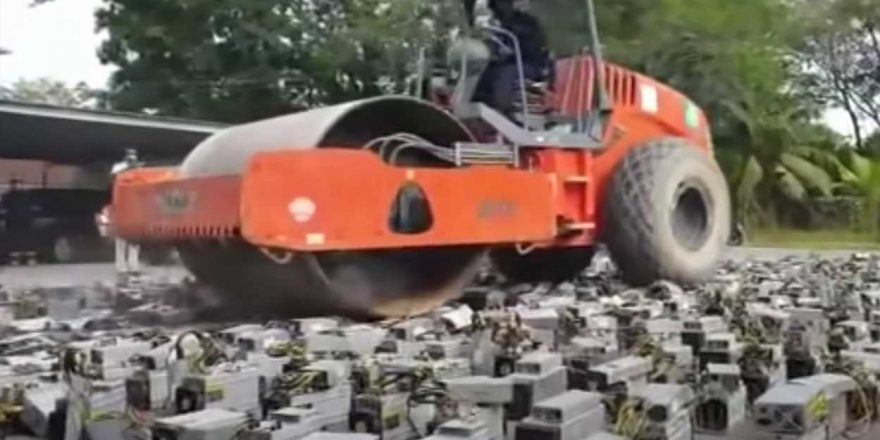 Giants star to accept all endorsement money in cryptocurrency

An inflation hedge? Bitcoin continues to slide as costs soar

Gigantic diamond sells for $12M in cryptocurrency at Sotheby’s auction

Malaysian cops seized and destroyed 1,069 bitcoin mining rigs by crushing them with a steamroller — after the miners allegedly siphoned off almost $2 million worth of electricity to power the energy-intensive machines.

The machines, which were estimated to be worth about $1.25 million, were seized in a joint operation carried out by police in the city of Miri and electric utility company Sarawak Energy between February and April, according to a report from the Malaysian National News Agency.

A video of the steamrolling posted last week by local news outlet Dayak Daily has made the rounds on social media.

Six people were arrested for electricity theft in the operation, and have been fined almost $2,000 as well as “jailed for up to eight months,” according to a statement from Miri police chief ACP Hakemal Hawari that was quoted by local outlets.

The theft of electricity to power bitcoin mining operations has been a persistent issue across the world, especially since the price of bitcoin skyrocketed earlier this year to more than $60,000 per coin.

So-called Bitcoin mining involves using computers to solve complex math problems in an effort to be rewarded with freshly minted units of the popular cryptocurrency, which was worth around $31,300 per coin as of 6 a.m. Monday.

In May, British cops stumbled upon a bank of around 100 bitcoin mining rigs at a site police had been told was a marijuana farm. The site had stolen thousands of dollars worth of electricity to power its operations, police said at the time.

Critics of cryptocurrencies, and Bitcoin especially, have taken aim at the mining process, saying that the demand for energy is exacerbating climate change.

Some governments, including that of China, have cracked down on mining operations in the country, citing the environmental impact as well as the potential for cryptocurrencies to disrupt the established financial system.

Still, demand for computers capable of carrying out the process is surging as speculators look to cash in on cryptocurrency.

The machines now sell for thousands of dollars and take months to ship out, according to China-based Bitmain.